Right On, Matt Gaetz! Pencil Neck Should Step Aside

RUSH: Congressman Matt Gaetz was on Tucker Carlson last night and he was talking about the prank phone call that Adam Schiff got and tried to track down this nude photo of Trump. Actually, nude photos of Trump that supposedly Putin had and he was gonna blackmail Trump with ’em and little Pencil Neck’s doing everything he can to get his hands on that material, and he’s tracking it down while claiming he knew all along it was a hoax.

GAETZ: Adam Schiff should step aside as the lead Democrat on the Intelligence Committee as a consequence of this scandal. While our FBI and Justice Department were suffering through an Obama nation, an Obama influence with these attempts to influence investigations, you had Adam Schiff off playing footsies with the Ukrainians trying to get naked pictures of Donald Trump. Adam Schiff has gone from someone with oversight responsibilities to an actual principal in this investigation engaging with the Ukrainians, and I think for better objectivity, he ought to step aside. 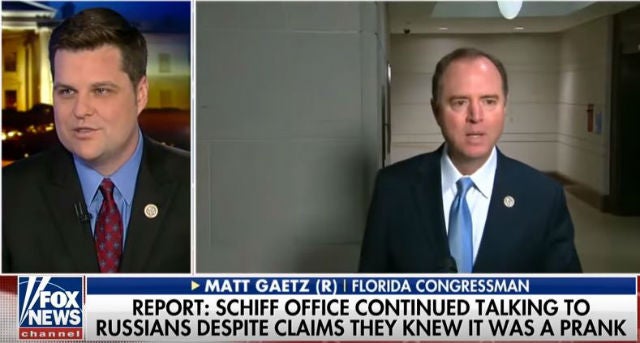 RUSH: I like it. I like it. This is hardball. This is the way you do it. Tell Schiff he’s gotta go. What Schiff should have done is call the FBI, “Hey, I just heard from a couple Russians. They tell me they got nude photos of Trump and Putin has ’em and that Putin is gonna be blackmailing Trump with them and it’s something I really took seriously. You need to look into it.”

Instead, he didn’t go to the FBI. He used his own staff to try to track it down, inserted himself in the investigation. “Well, Rush, he is the House Judiciary Committee ranking member. I mean, they do investigations.” But Gaetz still has a good point from the standpoint here of just playing hardball and pushing back on this.

RUSH: I think it’s a great thing to force Pencil Neck to set up aside. Don’t forget, folks, the Democrats succeeded in keeping Devin Nunes sidelined for many months. He was sidelined for six to nine months while he was being investigated by the Ethics Committee. Well, here’s Pencil Neck trying to track down a bogus set of nude photos of Trump. He’s deadly serious about it, thinking they exist, falling for the scam, sending his staff trying to get these photos and so forth. Why shouldn’t he be forced to step aside? This is irresponsible behavior, obviously partisan behavior.