RUSH: All right, now, here’s an example of I think a pretty significant achievement, at least effort, and a fake news attempt to destroy it. Story from the Wall Street Journal: “Saudi Arabia, U.A.E. Pledge $100 Million to World Bank’s Women Entrepreneurs Fund — Donation announced at event with Ivanka Trump, an advocate for businesswomen who proposed the fund.”

That’s where it goes off track. But wait. Stop and think of what’s happening here. I don’t know how many people know the way women are treated in strict Sharia Islamist countries. They are at best second-class citizens. They have to wear something on their head and on their faces in public. They can only speak if their husbands grant them permission. They can’t drive unless they’re accompanied. Basically they have no freedom whatsoever. Under Sharia, they are not coequal.

And yet here is Donald Trump taking that issue, the subject of equal rights, particularly for women, to a part of the world which you would think would not only reject it, but would warn him not to even go there. If you want a good trip with us, if you want to have this trip end being okay, you don’t even go to the way we run our country, our affairs, our culture, you stay out of that. That’s not what happened.

Trump went to the Middle East and made women’s entrepreneurial endeavors a major issue. It is a more pro-women thing than Barack Obama ever attempted in this part of the world. Yet we will not hear a word about it from America’s feminists or the American left. It turns out, however — I’m not gonna get into the details of the story. There’s a fake news reaction to this. Journalists are spreading fake news about Ivanka Trump on this particular issue. It was big on Twitter over the weekend. It was totally fake news. 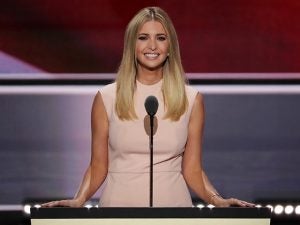 There is no Ivanka fund. Neither she nor her family manage, benefit, or have any control over this fund that they are setting up. It is totally unlike the Clinton family and its foundation. The money will actually go toward a fund called Women Entrepreneurs Fund, which is run by the World Bank. It’s not gonna be run by Ivanka. Now, look, I know, we can talk about it being run by the World Bank. My point here is that this is something that no previous president has really seriously tried, is to tackle the cultural inequality that exists in this part of the world.

The fake news on Twitter was that Ivanka Trump was engaged in pay-to-play with Saudi Arabia and the United Arab Emirates. Stored it in the Wall Street Journal story I just headlined for you. “Saudi Arabia, U.A.E. pledge a hundred million dollars to World Bank’s Women Entrepreneurs Fund.” It says that Ivanka proposed the creation of the fund, but she didn’t.

She doesn’t control it. She doesn’t raise money for it. Some were even tweeting that its name was Ivanka’s Women Entrepreneurs Fund. Reporters picked up that tweet; CNN wrote that this is virtually identical to what Trump and others in the GOP criticized the Clinton Foundation for. It’s not even close. So there has been an attempt at fake news, but it blew up.