RUSH: I’ve got a question for you. I asked Mr. Snerdley earlier, and he thought, “No, you can’t be serious.” And I’m telling you that I am. I’m not talking about people in Washington. I’m talking about the great unwashed leftists out there. Your invisible little tweeters, some of these Hollywood dummkopfs. Let me ask you a question. How many of these people out there do you think really believe that if Donald Trump is impeached Hillary Clinton becomes president?

Now, see, they’re laughing in there. “That’s ridiculous. Nobody would think that.” You wait. You just wait. That’s gonna pop up. There are people, I guarantee you, I don’t know what percentage, but I’m gonna guarantee you it’s gonna surprise you the number of people who are gonna be shocked that when Trump goes, if he goes, that it would be Pence in there as the president.

By the way, is that what the Drive-Bys are after? What is all this really about? I want to take you back to November 22nd of 2016. You remember what date the election was last year, Mr. Snerdley, by any chance? November 8th. So literally two weeks after the election, people listening to this program heard me say this.

RUSH ARCHIVE: The Drive-By Media is going to be devoted to getting Trump out of office. Not just bottlenecking his presidency and not just ruining it, their objective is going to be — I don’t care whether it’s impeachment, resignation, I don’t care what. They’re gonna do everything they can to destroy his presidency. And if they can’t force him out of office, the next thing they’re gonna do is make sure that he fails at everything he wants to do. They’ll do this for a bunch of reasons, among them and at the very top of the list, I think, is so they can prove to themselves they can still do it.

RUSH: I have rethought that last part. I mean, really, what all this still boils down to is the establishment closing ranks and getting rid of the outsider. And we’ll get into this in detail today, but that’s really what this is all about. And if you doubt me, I want to go back here. I went and printed out Trump’s inaugural address. I want to reset that picture for you. I want to remind you what you saw. 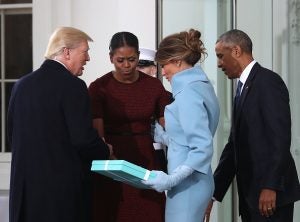 So it’s last January, it’s Inauguration Day, and, of course, the Drive-Bys are covering everything starting at dawn. And you remember when the limousine drops Mr. and Mrs. Trump over at the White House and Barack and Michelle (My Belle) are out there to greet them, and one of the odd things that happened was that Melania Trump presented a gift to Mrs. Obama. It was a Tiffany something, because it was a Tiffany blue box, and Mrs. Obama looked like, “What the hell is this?” It looked like she had been given a bomb detonator. She didn’t know what to do with it. She had no appreciation for it.

That struck me. The fact that she rolled her eyes and started looking around like what kind of joke is this? And it was just standard manners. You go over to the house for dinner, you take a bottle of wine, you take a gift. They were showing up, Melania Trump building a bridge here, trying to connect, and Michelle Obama was really rude, I thought, the way she dealt with that. But that’s irrelevant. Just one of the things I noticed.

And then the Trumps go in and are supposed to have the coffee and tea with the Obamas. They come right back out and they get in the limo and they head on up to Capitol Hill to get ready for the inauguration. And so the cameras switch to what’s going on, Capitol Hill, you have the inaugural stand, you’ve got the crowds building and so forth. And you have the dignitaries arriving. And the dignitaries arriving looked like they couldn’t believe that they were where they were. They had looks of vacant despair on their faces.

There wasn’t a celebratory mood among any of the Washington establishment coterie, ex-presidents, ex-vice presidents, ex-this, ex-that, the people that are up there on the actual inaugural stand, the stage, if you will. George W. Bush came in and they sat down. It looked to me like Trump had walked into the Star Wars bar scene. Or maybe they thought Trump was the bar room at the Star Wars bar scene or whatever. But you could just tell that the traditionalists in the establishment gathered there, it was not something that they were there to celebrate. They were simply behaving according to traditional dictates.

Okay, new president being inaugurated, we have to show up at this thing, this is crazy, this is odd, nobody could believe it. Still couldn’t get the fact that Trump won in their heads. Obama then shows up and he’s walking down the aisle headed toward the stage inside the Capitol building, and he’s got a look of perplexion on his face, and he’s saying to the media (imitating Obama), “Hey, what up, guys, what up? Hang on. Hang on.” Trump gives his speech. I want to share with you how that speech opened.

If you go back and read the first part of Trump’s inaugural address, you will understand what is happening today. You will understand why it began on Election Day last year. Trump said, “Today’s ceremony, however, has very special meaning, because today we are not merely transferring power from one administration to another or from one party to another. We are transferring power from Washington and giving it back to you, the American people.” A little H. R. McMaster pronunciation there.

“For too long,” Trump said, “a small group in our nation’s capital as reaped the rewards government while the people have borne the cost. Washington flourished, but the people did not share in its wealth. Politicians prospered, but the jobs left and the factories closed. The establishment protected itself, but not the citizens of our country. Their victories have not been your victories. Their triumphs have not been your triumphs. And while they celebrated in our nation’s capital, there was little to celebrate for struggling families all across our land. That all changes starting right here, right now, because this moment is your moment. It belongs to you. It belongs to everyone gathered here today and everyone watching all across America. This is your day.” Another H. R. McMaster pronunciation there.

“This is your day. This is your celebration. And this, the United States of America, is your country. What truly matters is not which party controls our government, but whether our government is controlled by the people. January 20th, 2017, will be remembered as the day people became the rulers of this nation again. The forgotten men and women of our country will be forgotten no longer. Everyone is listening to you now. You came by the tens of millions to become part of an historic movement, the likes of which the world has never seen before. At the center of this movement is a crucial conviction, that a nation exists to serve its citizens.

“Americans want great schools for their kids, safe neighborhoods for their families, and good jobs for themselves. These are the just and reasonable demands of a righteous public.” So he declared war. Do you remember this, folks? Do you remember looking at the stone faces behind Trump as he gave this speech? Do you remember stolen glances of contempt? I remember commenting to you after the speech, “My gosh, he took it to them. He made no effort to join the establishment today. He took it to them!”

Remember how Drive-By commentators characterized the inaugural speech as dark and dank and foreboding, and yet you didn’t? You felt like it was the natural culmination of the Trump campaign. But everybody up on that podium… You had McCain up there. You had any number of people up there, official Republicans, official Democrats, ex-presidents and so forth. Hillary Clinton. You talk about…? I mean, Nurse Ratched? The testicle lockbox was right there in her lap, and it was unlocked, and it was ready to be utilized.

I mean, everybody on that panel, on that stage, was miserable and they were defiant. And when it was over they caught up with some of the participants on that stage — some of the attendees, ’cause very few of them participated. They asked George W. Bush what he thought of it. He said, “That was some weird sh–” excrement, and moved on. “That was some weird [stuff].” So I predicted back on the 22nd of November… It’s not a big deal; anybody could have who understands the establishment and what’s at stake here.

Anybody who understands a lifetime and a career and a position of power and influence and wealth within this small cabal of people (relatively small), and some outsider with orange hair who is, in their minds, unkempt and boorish and piggish and brutish is gonna come in here and take over our world? To hell with that! And this effort, this plan, this desire to upend and stop the Trump presidency got going probably on election night and certainly within 24 hours. And now we’re seeing it manifest itself. And we’ve been watching it for the last months.

And it’s all taking place in the media. Every bit of it. All of the innuendo, all of the allegations, all of the anonymous sources. It’s all happening in the media. The Democrat Party is following the lead. Now everybody in the Democrat Party and the media is starting to whisper — and then get louder and louder with it — the idea of impeachment. Some are suggesting that that would take too long. Some are suggesting impeachment takes too long to build a case. “It’s too long! What if we lose?” Because, folks, there isn’t any evidence of a crime here yet.

Even the Comey letter… Can you imagine if Comey had gotten two scoops of ice cream, if any of this would have happened? I see there Comey having dinner with Trump and Trump’s got dessert presented to him, and he’s got two scoops of ice cream with the chocolate pie. Comey’s got one scoop! Can you imagine if Trump would have just been generous enough to dole out a second scoop of ice cream to Comey? We might be in a different place here. You just never know.