RUSH: Sue in Carbondale, Illinois, which is not far from my hometown of Cape Girardeau, Missouri. How are you doing?

CALLER: I’m doing good. I was in Cape Girardeau last week. I went by and I think I saw the house you grew up in.

CALLER: Yes. It was on Sunset Boulevard?

RUSH: Did you get out and genuflect? Did you take pictures?

CALLER: I did! (chuckling)

RUSH: (laughing) I love that.

CALLER: But, anyway, that’s not why I called today, but I did go over there. (giggles) 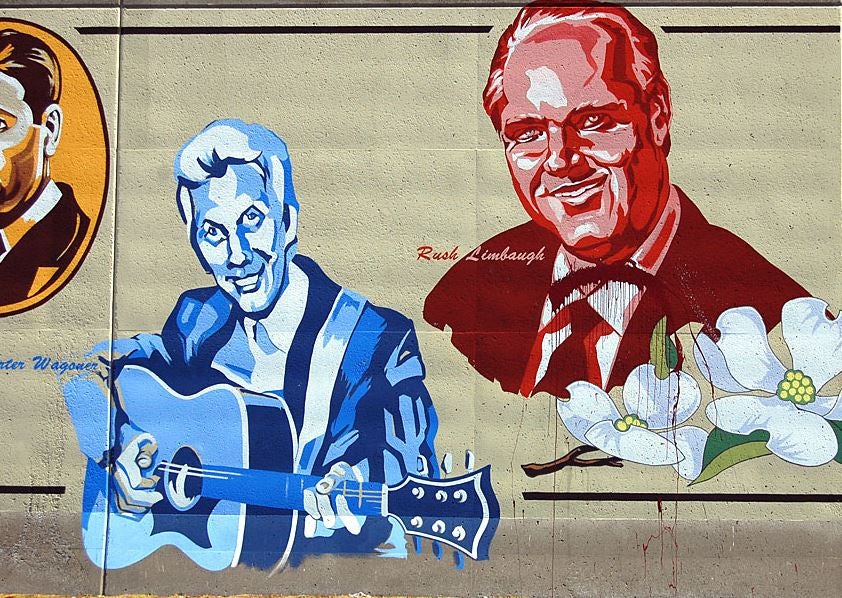 RUSH: Well, you know, they used to have a tour, a Rush Limbaugh tour. Did you go down to the flood wall and see my picture painted on the flood wall?

CALLER: I did not know that!

RUSH: Next time you’re down there just go down Main Street. You’ll see the flood wall and you can walk it. There’s all kinds of famous Missourians up there, but I’m the biggest.

CALLER: Yeah, you certainly are.

CALLER: Do they still do tours?

RUSH: What was that?

CALLER: Do they actually still do tours?

CALLER: Anyway, I saw the house that they claim was yours, so…

RUSH: Well, who claimed it was mine?

CALLER: Well, actually, I Googled it — Rush Limbaugh’s home or whatever — and that’s what came up.

RUSH: Do you remember what street it was on?

CALLER: All right! (giggling) Cool. The reason I called was about —

RUSH: You know what I used to do at that house? I used to water balloon trick-or-treaters from the upstairs window.

CALLER: Oh, did you? (giggling)

RUSH: Yeah, my mother’d be passing out candy and I’d bombard everybody with water balloons.

RUSH: (laughing) It was fun. It was so much fun. Mother got so mad. She started going out with umbrellas to protect the young trick-or-treaters.

CALLER: Awwww! (giggling) She was sweet.

RUSH: She was sweet. She was very sweet. Anyway, I keep interrupting you. I’m sorry.

RUSH: What a caller. What a caller. Somebody who understands the concept. I thank you again. But seriously, Sue, what is it that you wanted to discuss?

CALLER: Well, it had to do the James Comey firing.

CALLER: My theory is that it’s just because Trump got the presidency and Miss Hillary did not, because had he not fired Comey, then the allegation would be, “Well, of course he didn’t fire Comey! Comey helped him get elected. Comey’s in his back pocket.” Either way, Trump could not win. He would get criticized.

RUSH: There’s no way Trump was going to win anything like this.

CALLER: That’s exactly right. He needs to do what right and let the chips fall where they may, because he’s gonna get criticized no matter what.

RUSH: Are you a person that voted for Trump?

CALLER: I certainly am.

RUSH: You know, every time I talk to a Trump voter, it is… Well, it’s just short of profound. None of this stuff is affecting you, is it? You are not… I mean, have you begun to doubt your vote yet?

CALLER: Well, I would think that parents of Liberty University would not have a whole lot they didn’t like about him, I mean, in general.

RUSH: Trump was universally popular at this thing, you’re right. Parents there were not upset. People at Liberty University invited the right guy. They knew they wanted Trump and he showed up and he delivered a great speech. Here’s a line. Grab sound bite number 11. You know, it’s not cliche. There are positive things happening in this administration. They are having success.

You look at the number of illegals crossing the border, practically nonexistent, just because of the threat to build the wall and the intent, demonstrated intent to enforce the law. The numbers are way down. Jobs are coming back. Corporations, planning, building new plants, which will lead to new jobs. There are good things. They’re just not being reported on, and that’s not all. I mean, Trump’s giving them a lot of ammo to focus on instead of some of these achievements, but listen to this. It’s about 52 seconds and we left in the applause. There’s 13 seconds of applause here that we left in just to make sure you got the complete flavor.

THE PRESIDENT: In your hearts are inscribed the values of service, sacrifice, and devotion. Now you must go forth into the world and turn your hopes and dreams into action. America has always been the land of dreams because America is a nation of true believers. When the Pilgrims landed at Plymouth, they prayed. When the founders wrote the Declaration of Independence, they invoked our creator four times, because in America, we don’t worship government; we worship God. (cheers)

RUSH: Except, in all truth, the left does worship government. And, in fact, the left wants government seen and perceived as the provider of all things: material and immaterial, such as equality and justice and sustainability. They damn well want government to be seen as the reason you are grateful in your life. And anybody that is saying things or doing things counter to that is going to be attacked as just one of the many reasons that Trump is. Grab sound bite number 10. This is real quick. I addressed this earlier. This is something I said that concerns me.

THE PRESIDENT: Look, I thought that this would be a very popular thing that I did when I terminated Comey, because all of the Democrats couldn’t stand him. But because I terminated him, they said, “Ah. We get some political points, we’ll go against Trump.”

RUSH: If he’s being serious here, and I’ve heard three or four people say he really thought that the media, that the Democrats would like him, ’cause he was under the impression they hated Comey. Look, it troubles me if it’s real. To not know how this was gonna — Trump needs people around him. He doesn’t see things ideologically, and so he needs people around him who can tell him who these Democrats really are, what their real objective is. I mean, I heard that he was shocked that all these protests were still going on three weeks after his inauguration. That he thought after they got it out of their system that we’ll all start unifying.