The Genesis of the Russia Hoax

RUSH: Green Bay. Here is Brian. Welcome to the program. Nice to have you with us.

CALLER: Rush, it’s so great to talk to you. This is a thrill.

CALLER: I gotta say, “Happy Mother’s Day,” to my wife and my mom, and I’ll get right to the point here.

RUSH: Wait a minute! Hang on! Ah, ah, ah, ah. If you’re gonna say, “Happy Mother’s Day,” to your mom, you gotta tell us her first name or how’s she gonna know?

CALLER: Oh! Well, my wife’s name is Jody, and my mom’s name is Pat.

CALLER: This is gonna be awesome. Ha! They’ll be talking about this for years.

RUSH: Well, congratulations to both of them. You sound like you’re a great guy to have in their lives.

CALLER: Well, I like to think so. But my comment was on the thing I’ve been listening to the last few days with the firing of Comey and the “poor timing” and all this stuff. Uh, the whole idea behind this thing, the story… I don’t think anyone thought the story was gonna last as long as it was. It was a crazy story. No one… No one thought it was gonna last as long as it did.

RUSH: You mean the —

CALLER: There’s no evidence to it. When Trump brought it up during the elections, he was laughed at. Even we, as Trump supporters, thought, “Oh, jeez, you know, he really stepped into it this time. But, you know, let’s just hope it kind of goes away a little bit.”

RUSH: Let me step in here because I’m glad you called and said this, because I’ll bet you a whole lot of people in the Trump campaign and administration thought the same thing, that this Russia thing, there’s nothing there; this has gotta die out. Had I been there, had they asked, I would have told them, “It isn’t gonna tie out, and you had better understand why it’s happening, and you’d better come up with some way to get rid of it, because it’s gonna hang around as long as they can make it effective.

“It’s not based in truth. It’s not based in anything! The whole purpose of this is to cast a current, present, never-ending cloud over the legitimacy of Trump’s presidency.” You’re right about Trump making the joke, but nobody outside the Trump group of people laughed at it. If you go back to that moment… And this was about Hillary Clinton’s emails. She had 60,000 emails on that illegal server, and she had only turned over 30,000 after she had gone through all of them and she had determined the ones that were relevant for the Department of State to see.

And she had gotten rid of the other 30,000. They were just about yoga lessons and Chelsea’s wedding and who the hell knows what else. She told us there’s nothing worth seeing here. And we then later learned that they had been deleted but a lot of computer experts said, “There’s no such thing as literally deleting unless you format that drive.” So those emails are somewhere. That begot a discussion of where could they be? And there were fake efforts to find them.

The Obama DOJ was not interested in it. The Obama State Department didn’t care a rat’s rear end about finding ’em. So Trump, one day, was asked about it. He grew a little frustrated, and he said, “If anybody in Russia is listening, maybe you can find these 30,000,” and the moment that happened, the media — with total irrationality and hysteria — began the narrative that Trump was in league with the Russians and was guiding them and helping them to produce Hillary’s emails. That’s one thing that happened.

Then the election, the campaign goes on. All during the campaign… This is fundamentally important. All during the campaign, everybody on the Democrat side — which includes media, pollsters, Democrats — all thought Hillary was going to win and win in a landslide. It was such a foregone conclusion; Hillary did a half-ass campaign. She went dormant for three, four days a week. She didn’t go to any blue states in the upper Midwest because she thought they were a lock. Trump was in them constantly with 20,000-person rallies.

Election night comes, and even up to nine o’clock on election night — you can watch the election returns — everybody thought Hillary was gonna win this in a going-away landslide. And in the 45 days prior to the election, there wasn’t a word said about the Russians, because the Clintons thought they were gonna win. They didn’t want anybody thinking the election was tainted. What was going on is at the third debate, Chris Wallace asked Trump if he would accept the election results on election night.

They were trying to paint Trump as unstable, as a radical raconteur, as an upsetter, as somebody who was gonna come in and turn everything upside down. And Trump said, “No, I will not tell you right now tonight that I will accept the results. I’m not gonna tell you I accept them until everything happens and I see what happens.” That begot a full month of Hillary Clinton’s campaign and the media leading the allegation that Donald Trump was unfit for office, because Donald Trump was threatening our very democracy, because Donald Trump was signaling that he would not accept a legitimate election result.

And they were explaining what a threat to our very way of life this attitude was. And that was for a full month. There was not a syllable spoken of any concern for the Russians tampering with the election. The talk of the Russians had to do with the tampering of the Democrat National Committee’s computer network and the John Podesta emails, but not with the election. The Clintons thought they were gonna win. There was no talk that her win would in any way be illegitimate! Trump is who was going to be illegitimate.

They were not worried about the election being hacked by the Russians, they weren’t worried about anything, because they didn’t want to taint their upcoming victory. Well, we all know what happened. Trump wins. He wins in an Electoral College landslide. This sent the Clinton campaign into a tailspin the likes of which we still really don’t know. But I’m telling you, they were driven out of their minds. And when that happened, the first thing that occurred to all of them was to come up with a scenario in which they were not to blame for it. 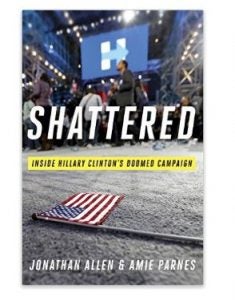 They would not allow ongoing stories of the incompetence, say, of Robby Mook (campaign manager) or any of the pollsters or any of the consultants or Hillary herself. The reason for this shocking, nobody-saw-it-coming upset was blamed on the Russians. It’s in the book that has been written about the Clinton campaign, and they hatched this idea that the Russians tampered with the election and helped Trump, 24 hours after she lost — and it is in the book. I have it here. I printed it. Just let me find it real quickly.

“New Book ‘Shattered’ By Clinton Insiders Reveals ‘Blame Russia’ Plan Hatched … Within 24 Hours of Election Loss,” and I have here a screenshot of the page in the book. “The authors detail how Clinton went out of her way to pass the blame for her stunning loss on ‘Comey and Russia.’ ‘She wants to make sure all these narratives get spun the right way,’ a longtime Clinton confidant is quoted as saying. The book further highlights how Clinton’s Russia-blame-game was a plan hatched by senior campaign staffers John Podesta and Robby Mook…”

The book, written by people embedded in the campaign, says that Mook and Podesta hatched the Comey-Russia narrative as the explanation for Hillary’s loss. That’s it, folks. That’s what. In an investigation that started in July, Obama sic’d the DOJ on Trump. There was an Obama-administration-ordered investigation of Trump and Russia because of the Podesta emails. This is… This is… A hoax? I don’t know what you call this. A scam? There isn’t anything there. And let me remind you again. Here is a quote from Senator Grassley this week.

“On Tuesday, the president’s letter said that Director Comey told him he was not under investigation. Senator Feinstein and I heard nothing that contradicted the president’s statement. Now Mr. Comey is no longer the FBI director. But the FBI should still follow my advice. It should confirm to the public whether it is or is not investigating the president. Because it has failed to make this clear, speculation has run rampant.” Dianne Feinstein and Grassley have both said that nobody has ever indicted Trump in any briefing to them.

There has never been any acknowledgment that the investigation into Trump has found anything. Furthermore, Grassley and Feinstein confirmed that Trump is not part of the Russia-FBI investigation, just as Trump says. “President Trump is not a target nor is any senior government official if Comey’s account is correct,” one source said…” Grassley’s quote again: “On Tuesday, the president’s letter said that Director Comey told him he was not under investigation. Senator Feinstein and I heard nothing that contradicted the president’s statement” in any briefing they’ve had with Comey or anybody else.

“Now Mr. Comey is no longer the FBI director. But the FBI should still follow my advice.” This is Grassley. The FBI “should confirm to the public whether it is or is not investigating the president. Because it has failed to make this clear, speculation has run rampant.” Dianne Feinstein is the ranking Democrat on this committee, and she is saying that nobody has ever come up and testified that they’re investigating Trump.

They’re never said they’ve got anything on Trump. They don’t have anything! This has been in open testimony. Comey and all the intelligence guys have said to date — James Clapper, they’ve all said — they’ve seen nothing. No evidence, no proof of any kind of collusion between Trump and Russia. It’s a nonstory, but yet look at it. Our guy from Green Bay started out saying, “Everybody could have known there was nothing to this.” If I’d have been in Trump’s inner circle, I would have told them that this was gonna go on until they beat it back.

‘Cause there’s no way of this is going away. Now you add Comey to it; there’s no way this is going away. They’re gonna have to beat this back. They’re gonna have to embarrass and shame the media. The media’s not gonna give this up. Elijah Cummings said we may not get to the answer for four years! There isn’t an answer to be found. Not where the word “guilt” will be used.