RUSH: Let me tell you the next thing the media is going to have an absolute fit over. It’s already begun, and it is because of a tweet that the president sent out earlier today. Now, I didn’t see the president’s tweet when I first heard about this. I heard something else. I heard a report that the president had warned James Comey that there had better not be tapes of our conversation. That’s what I heard. I don’t remember where. It was during show prep today.

Very important here. What I heard, what I read was that Trump was “threatening” Comey. “Comey better hope there are no tapes of our conversations!” The way that was reported and the way I interpreted that was that maybe Comey had secretly taped Trump, and that Trump had found out about it and was livid and was warning Comey, “You better not use it!” That’s the way it was reported. It turns out, it’s exact opposite.

Here is Trump’s tweet: “James Comey better hope there are no tapes of our conversations before he starts leaking to the press.” Well, I didn’t have it presented to me that way. The way it was presented to me — the way it was reported — was that Comey had perhaps taped Trump when they’d had dinner and that Trump found out about it and was threatening Comey — “You’d better not release tapes of our dinner or else!” — and it’s the exact opposite.

If anything, Trump is doing the taping and is warning Comey: “If you go out there and start lying about it, I can disprove what you say. So you’d better be careful. That’s what Trump’s tweet really means. Now, I think it is a fascinating misrepresentation. I don’t know if any of you, when you first heard about Trump’s references to tapes of conversations with Comey… I don’t know how you first heard it, but I first heard that it was reported specifically that Comey might have taped it.

Why? “Because Comey knows Trump’s insane! Comey knows Trump’s a lunatic! Comey knows he can’t trust Trump! So Trump asks him to dinner and Comey goes in there with his iPhone and is taping things to guard against Trump going out there and lying, like Comey saying that he cleared him three times!” That’s not what happened. The New York Times has a story about Comey having dinner with Trump. Trump sees the story and then tweets, “James Comey better hope there are no tapes of our conversation before he starts leaking to the press.”

All we need is Hope Hicks and an 18-minute gap in the tape! (laughing) The media is so desperately to relive Watergate. Journalists who are practicing journalism today who were not even alive during Watergate think this is their Watergate! What is Watergate? It’s when you get a president. It’s when you destroy a president. (laughing) So now Trump’s alluding to the fact he may have to tape him! (laughing) Sorry, folks, I just have to laugh. 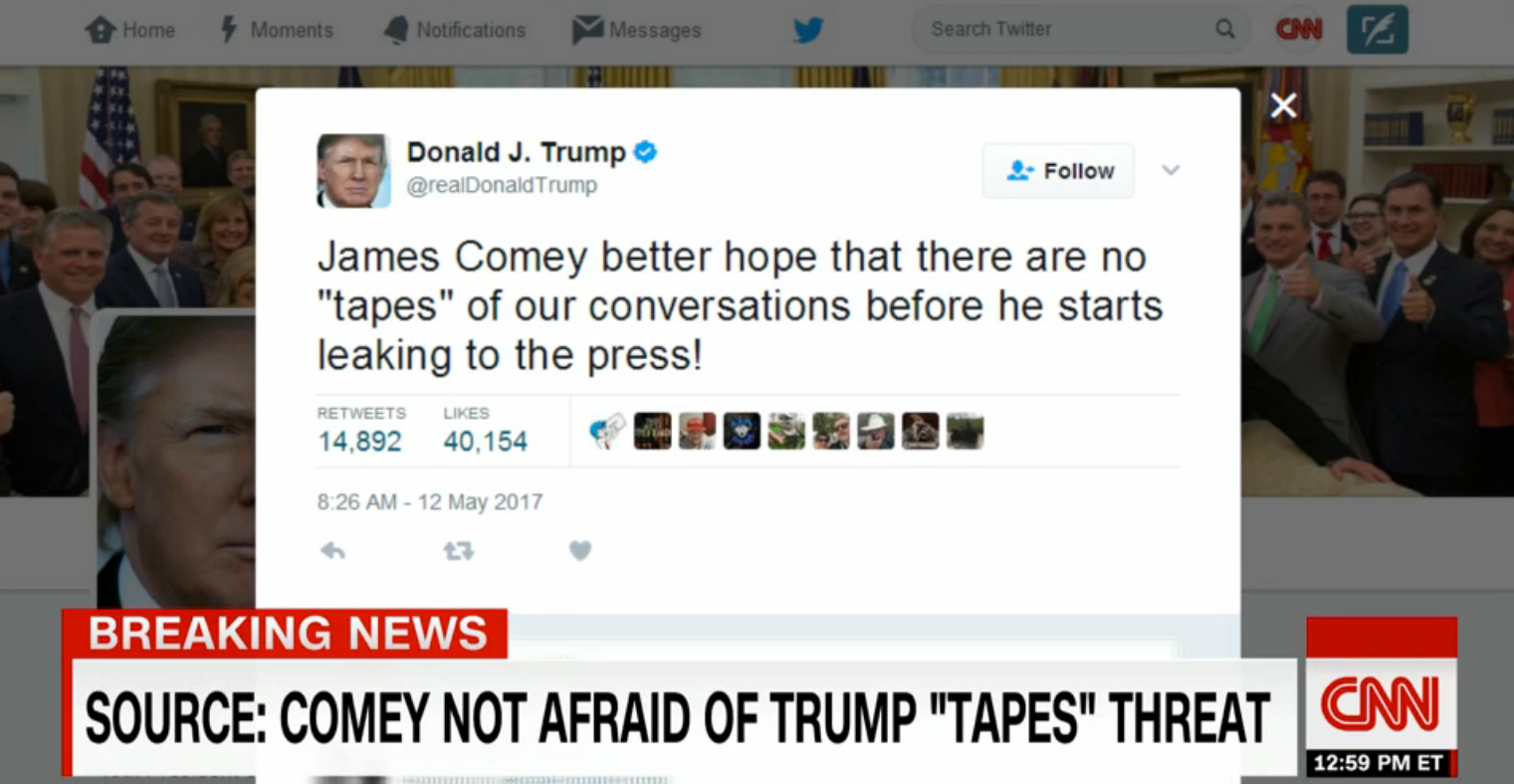 RUSH: So, folks, right when we went to the break, I was laughing about Trump, ’cause I tell you what’s happened here with Trump saying he might be taping people in the White House. The media’s gotten as hysterical as they were over his tax returns, as hysterical as they are over the Russians and firing Comey, and NBC Access tape where he talked about pussai. (laughing) They’re just… So I’m watching CNN. As soon as we went to the break, CNN runs a graphic the bottom of the screen, “Source Says Comey Not Concerned About Any Tapes.” (laughing)

So they already… Somebody reached out. “Are you worried? Are you worried? Trump’s maybe got tapes! Are you worried?” “No, no. You can tell CNN I’m not worried.” (laughing) Who do you think the source is? It isComey! (laughing) Not worried about any tapes! (laughing) I’m sorry, folks. I just… I marvel at the ability to drive these people crazy. They think they’re driving Trump crazy, and they may be. But I’m telling you, they’re losing it, too. They’re literally out of their minds now. We’re watching a descent into insanity. It’s Jane Eyre right in front of us.

RUSH: I tell you, folks, you want to know why I’m laughing at Trump saying, “Comey better hope there no tapes of our conversation”? (laughing) You remember back during the campaign when nobody could find the 30,000 emails? There were 30,000 Hillary Clinton emails nobody could find, and Trump got tired of everybody asking about it. So Trump said, “Hey, Russia? Maybe the Russians can find the tapes. Russia, if you’re listening maybe you could find the 30,000 emails,” and the Drive-Bys went insane.

RUSH: Trump’s out there cracking jokes; they don’t get it. They have no sense of humor. Trump is mocking the fact that everybody knows where these emails are that Hillary has and nobody will produce ’em. So he asks the Russians to find them, and the stupid idiots in the media tried to use that as proof that there was collusion between Trump and the Russians over Hillary’s emails. If there’s any foundation… I say that with very loose intentions. 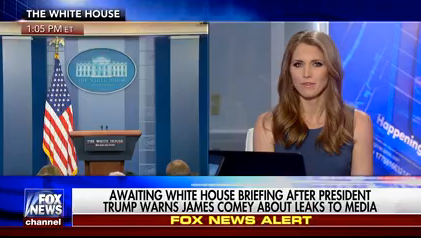 So CNN, “Source Says Comey Not Worried About Any Tapes.” (laughing) They’re all breathlessly waiting for the White House press briefing, and Fox has their own graphic. The Fox graphic is: “Awaiting White House Briefing After President Warns Comey About Leaks to Media.” (laughing) Then there’s another tweet under that one from earlier this morning. Trump tweeted: “As a very active president with lots of things happening, it’s not possible for my surrogates to stand at the podium with perfect accuracy.”

Now, this is in reaction to the Drive-Bys literally going hysterical over different versions of stories being told at different times of the day regarding Rosenstein at the Department of Justice and Comey being fired and Trump saying he did it. “No, Rosenstein did it! No, I did it.” The press secretary’s out there trying to keep it all straight, and Trump says, “Hey, there’s so much going on with me, nobody can keep up. My surrogates don’t know what’s what from day to day because in my presidency, there’s lots of stuff happening.”

I wish people would take a moment to step back and realize what an epic presidency this is and realize we are never gonna see anything like this again our lifetimes, and we’ve never had it prior to this in my lifetime. I mean, normally we get idiots like Jimmy Carter, who do great damaging things. I mean, while Trump is doing all this, the country is vastly improving! As I have detailed today. Some of the core things that were destroying the guts of this country are being reversed. And it’s…

This is so outside what everybody has accepted as establishmentarian norms. And then the media’s acting like it’s the end of everything sacred, and I just have to smile at it. (interruption) No, don’t misunderstand. I know there’s some serious things going on. It leaking is deadly serious. (sniffles) You know, when I laugh — I’m sorry — I get sniffles, folks. But the leaking which I talked about in the last hour, is a serious thing.

RUSH: It was predicted. The Drive-Bys have become hysterical over Trump’s tweet that Comey had better be careful if he starts leaking ’cause there might be tapes. Spicer is back doing the daily briefing. Here just a sample…

SPICER: I assume you’re referring to the tweet, and I’ve talked to the president. The president has nothing further to add on that.

REPORTER: Why did he say that? Why did he tweet that? What should we interpret from that?

SPICER: As I mentioned, the president has nothing further to add on that.

REPORTER: Are there recording devices in the Oval Office or the residence?

SPICER: As I’ve said for the third time: There is nothing further to add on that.

REPORTER: Does he think it’s appropriate to threaten someone like Mr. Comey not to speak?

SPICER: I don’t think that’s… That’s not a threat. He simply stated a fact. The tweet speaks for itself. Uh, I’m moving on.

I’m still telling you this is fun to watch this happen.

I’m having fun watching the media spin out of control, whoever else is also. ‘Cause I’m telling you: On the other side of this, there is all kinds of good news happening that is related to the Trump agenda. I’ve shared it already today. If you missed it, check RushLimbaugh.com later, as we update the site. We update it much more frequently now. We can update it practically instantly. You don’t have to wait ’til the end of the day for the whole show to be updated. It’s all worth the contrast that we’ve made today, taking note of it, if you missed it.