My Message to Republicans: Don’t Fall for Media Tricks on Comey

RUSH: You people that voted for Donald Trump, you’re just every day seeing why you did it. I have a message for the Republicans: The last thing you should do is find anything in common with the Democrats on this. The last thing you should do is feel sorry, simpatico. Do not fall for the temptation to join the Democrats in their rants against Trump on this. Here’s the deal, folks. There is no collusion. The Russians did not hack, did not tamper, did not impact the outcome of our election. It’s been established for over nine months, if not longer.

It’s not possible. There is not a single person anywhere in law enforcement, in Congress — there’s nobody officially anywhere — who can show you a syllable of evidence that whatever the Russians did had anything to do with the outcome of the election. There is nothing. And yet, it’s the only thing the Democrats have. They dare not let go of it. It’s the only explanation they have for why Hillary Clinton lost the election — and in that is a tremendous opportunity for the Republicans.

RUSH: I checked the email during the break. Don’t misunderstand here, folks. I’m not saying the Democrats don’t pose a threat. I’m not… Look, two things here. The Democrats are in deep trouble, electorally. The Democrats are not running the left; the media is. And the media is clearly not inconsequential. Don’t misunderstand. I’m not saying that what’s happening here is obviously to everyone. I’m saying the Republican Party has a golden opportunity here to continue to hammer the nail into the coffin of the Democrat Party.

The media stands in the way, obviously. But I’m just telling you, this kind of irrational hate — this all-consuming hate and derangement, delusion — it isn’t healthy. The majority of the American people do not want their politics, day to day, to be governed by this stuff. If they did, we wouldn’t be living with circumstances as we are now. We’ve got a big row to hoe. I don’t want to be misunderstood. But this instance, this episode that’s happened here, Comey being fired; Trump doing it?

It does not… It is not anything the Democrats or the media are trying to say that it is. It’s justified. I see if you want complain about the timing. It was long overdue. There’s no coup here. There’s no constitutional crisis whatsoever. None of these allegations the Democrats are making about this or the media have any substance whatsoever. Not saying that they can’t make people believe this. I know better than everybody that they can. I just don’t want the Republicans to get sucked into this and start talking and acting like the Democrats are.

And the reason they would do it is why they always do it: a misunderstanding of the public mood, a misunderstanding of thinking that the Democrats and the media represent the majority of thinking in this country. And I’m here to tell you, they don’t. It might be close, but they don’t. That’s part of the trick every day in the media, is to make it look like everything they’re reporting and saying about it and believe represents the vast majority of thinking. And anything that’s not that is extremist, filled with hate, or is racist or nativist or whatever.

And the Republicans have a golden opportunity here if they just don’t fall for this. But you know, the Republicans are part of the establishment too. Some Republicans are. And the enmity that people hold for Trump inside Washington is only ratcheting up. And, in fact, even in that regard, Trump is — you have to say — fearless. They had to know what was gonna happen here. You know what you ought to do? I did this. You need to go read some of the reaction to this within the first five minutes of it.

Within the first five minutes, go read some blogs, conservative blogs. Go read some conservative websites. You know what you’ll find? You’ll find unanimity in support of Trump. Well, not unanimous but it’s overwhelmingly. The case they make is Trump was totally justified. This was long overdue. Comey had long ago ceased behaving appropriately for an FBI director. The immediate analysis was how Trump was justified, quoting Rosenstein over at the Department of Justice, the number two there behind Jeff Sessions.

His memo is explicitly perfect and clear in detailing why this happened. The initial analysis of this was that Trump was home free, had concrete to stand on, not just firm ground. Ten minutes or 15 minutes after the media gets hold of it and totally changes all the narratives, is when people begin reacting to that and not the actual news. What I’m saying is: Don’t react to the media’s coverage of this. React to the actual event. And the actual event, the firing of Comey is entirely, completely justified.

A case can be made for it, as many Democrats have been. There’s hypocrisy galore out there (and I know hypocrisy never sticks to the Democrats). I’ve got a page here of tweets and complaints by Democrats. “Nancy Pelosi Says Comey May Not Be ‘in the Right Job.'” All of this is within the past three months. “Harry Reid: ‘Comey should resign.'” “CNN’s Top Legal Analyst Paul Callan: ‘Time for FBI Chief Comey to Resign.'” “Since the FBI Found that Hillary Clinton Broke the Law, Recommend Charges or Resign,” Change.org. 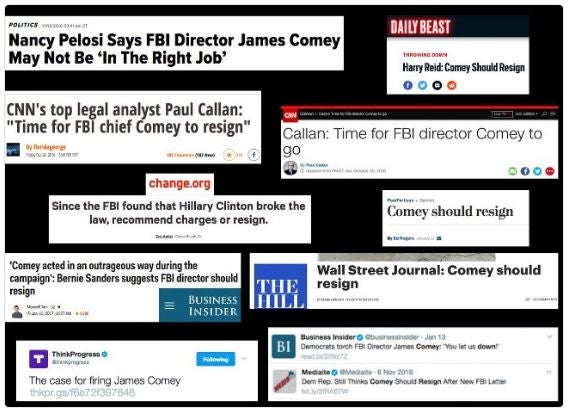 So, in other words, Comey should go. Wall Street Journal: “Comey Should Resign.” Business Insider: “‘Comey Acted in an Outrageous Way During the Campaign’: Bernie Sanders Suggests FBI Director Should Resign.” ThinkProgress!. This is the Democrat, Hillary Clinton site. ThinkProgress is their place. That’s where Podesta worked. “The Case for Firing Comey.” Podesta’s out there saying that the American people “are getting nauseous at the sound of Comey’s voice.” They’ve been mad at Comey ever since July 5th. Now all of a sudden Trump fires him? 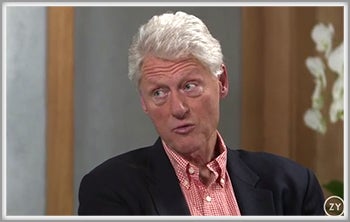 “Screw you.” So Nixon fired that guy. The solicitor general, the guy that represents the United States Supreme Court. Robert Bork replaced the fired solicitor general and went over and fired Cox. That happened on a Saturday in the early seventies. I was in Pittsburgh. I remember this ’cause the program director of the station where I worked called me to come in ’cause we might not have a show to do Monday. They thought the country was gonna fall apart because of this.

I’m not kidding you. I’m 22 years old. I’m saying, “What?” “Yeah, man! The Saturday Night Massacre. Nixon’s going nuts. You gotta get in here. We need everybody at the station in case they close the city off.” “Are you kidding me?” “No. Get in here.” So we go in there Saturday night because of the Saturday Night Massacre. Bork got rid of Cox. That was it, and it didn’t save Nixon. Nixon wasn’t doing a coup. Nixon was president. Trump’s not doing a coup. He is president.

Leaders don’t mount coups! Leaders have coups mounted against them, which is what is happening here.