RUSH: What I was looking at, what I was printing out, Drudge has a story here with a photo that’s the top thing on his page called, “Putin Power on Parade,” and the picture is… It looks like women in the Russian navy who are decked out in full dress uniform, and they are marching by as Putin is putting his military on display. You know, the Soviets back on May Day, used to have these things where all the new missiles and weapons would be paraded before the Politburo in front there the Kremlin, kind of like the North Korean guy still does.

It looks like Putin continues the tradition here, and then there’s another picture of women. It’s actually three different pictures. It looks like the air force, the army, and the navy, and it’s all women. And they’re all smiling. They all look robust. There’s not a one of them that’s wearing one of those crazy vagina hats like American women do protesting Trump. These women are decked out in full military uniform, obviously marching by a reviewing stand. And they’ve got makeup on. It’s incredible here. 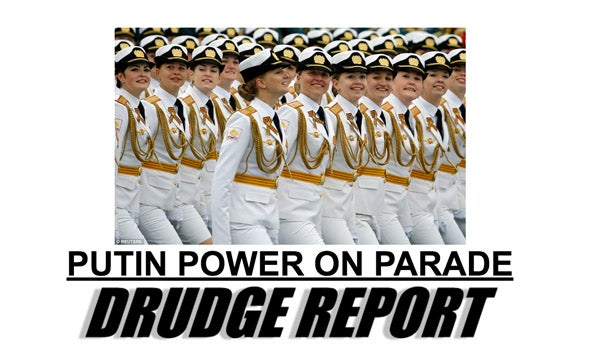 Well, I mention that; they’re all smiling. It is Putin displaying his military might, and this is something that dictators and communists do. They always put their troops on display and their armaments on display, because it is really the way they cement their power, and they put it on display as a show of force, intimidation, as an example of the power that they can project. It’s the actual Victory Day parade in Red Square that kind of was like Russia and World War II. Well, these predictors are striking to me.

Remember the All-American First Cavalry Amazon Battalion? This goes back, folks, to during the administration of George H. W. Bush. There was a Panamanian leader by the name of Manuel “Pineapple Face” Noriega. He literally was so pockmarked, he looked like a pineapple. And we issued an indictment. The guy was involved in Panamanian drug running and arms running and so forth, and George H. W. Bush issued a Department of Justice indictment. So the guy hid. He allowed the Catholic Church to hide him in the papal nuncio in Panama City.

So we sent a military contingent there to try to roust the guy and have him brought to justice in the United States to answer to the indictment. And one of the things that our troops did was play loud — just the noisiest rock ‘n’ roll — music our military could come up with on concert-type speakers, outside the papal nuncio, trying to drive Pineapple Face insane, to force him out of there. And I forget what prompted this but there was a battle-ready contingent of female…

Women in combat was a big, big issue at the time. Should there be, how should it be organized and so forth. I, at the time, trying to help the U.S. military, decided to come up with something called the All-American First Cavalry Amazon Battalion. There are some things that I knew. I’m sorry. These pictures just reminded me of this. Some things that I knew. I learned these things late in life. But I’m told that — and Molly Yard, who was the leader of the NOW gang at the time, was the inspiration for this, the All-American First Cavalry Amazon Battalion.

We all know that PMS is a dreaded, dreaded thing. My thing was that if we could have a battle-ready contingent, women in combat during that particular time of the month, nobody could beat us. We can roust anybody. We could defeat anybody. But what would we have to do to make sure that we always had, at a moment’s notice, a battle-ready contingent of women with premenstrual syndrome… Premenstrual syndrome?

That’s when I learned that these menstrual cycles can synchronize if women are grouped together in barracks, dormitories, or whatever. So I proposed that the U.S. military try this and call it the All-American First Cavalry Amazon Battalion. Looking at these pictures of these Russian women — navy, air force, and army — there’s not a one of them that looks like they’re angry. There’s not a one of them. They’re all smiling. They’re all happy.

As I say, not a one of them is wearing one of those silly vagina hats. Not one of them looks like your average American feminazi. They just amazing pictures. I wonder if Putin does the sync. I wonder if he takes this into account. You never know. Stranger things would have happened.