Comey Hearing: Beyond the Theater of the Absurd

RUSH: I don’t know. I’m laughing myself silly here. I can’t watch this and keep a straight face. This is beyond the theater of the absurd now. It’s just the biggest circle… I’ve never seen. I’m talking about Comey testifying before the Senate whatever committee. Does it matter what committee when Al Franken’s on it? Does it really matter? About the election. And it comes right on the heels of Hillary Clinton blaming Comey for stealing the election from her. 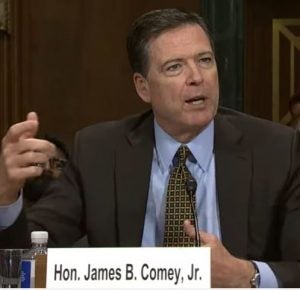 And he ends up mentioning pretty much the same thing, how agonizing it was to steal the election from Hillary. (imitating Comey) “I had no choice, it’s horrible, I feel so bad. I was nauseated, you’ve gotta understand.” And Dianne Feinstein (imitating Feinstein), “Why didn’t you throw up instead of doing what you did?”

But here’s the piece de resistance. I’m watching Chris Coons, and I didn’t know who it was. I thought it was Brad Sherman from California, but he’s a member of the House. You know, one bald guy looks like every other bald guy to me. So I’m watching Coons up there, and he’s asking Comey with all the seriousness and the pomp and the concern and the weight, the heavy weight of the subject matter here, he asked Comey, “What are you doing, you know, there’s elections coming up in France and Germany. These are important allies of ours. What are you doing to help France and Germany in their upcoming elections that we know the Russians are trying to affect there, too?”

Really? (laughing) We know that? What’s the FBI doing to help France and Germany thwart the Russians as the Russians are trying to hack and interfere in every election in the world now. This is how far these people are taking this. You know, there’s a story in the — well, it’s not a story, but there are reports on Hillary’s interview, which we played some sound bites. Well, we had them. We didn’t play them. She had this international Women for Women International or whatever this think tank group, women, Hillary interviewed by Christiane Amanpour.

The Democrat Party doesn’t want anybody on their side taking personal responsibility. They want scapegoats. They want Comey. They want Putin. The Democrats want a victim. Hillary’s the victim. The victim’s always a hero with Democrats, especially phony victims. The phonier the victim the bigger hero you are. And here she is blaming herself. That just shows you how out of touch she is with her own base.

RUSH: Here’s Chris Coons. This is what I was talking about when the program began. This guy was asking questions of Comey — the Senator from Delaware — that I was just I could not keep a straight face listening to this. Here’s the question first…

COONS: What more should we be doing both to defend our election infrastructure and our future elections against continuing Russian interference? And what more are you doing — is the agency doing — uh, to help our allies in countries like France and Germany that have upcoming elections, uh, where there’s every reason to believe the Russians are actively interfering there as well?

COMEY: Two things that we can do and that we are doing both in the United States and with our allies, is telling the people responsible for protecting the election infrastructure in the United States everything we know about how the Russians and others trying to attack those systems —

COMEY: — and we shared the same thing with our allies that won.

COMEY: Two, to equip the American people and our allies to understand that this is going on.

RUSH: Is this really happening?

COMEY: A big part of what the Russians did was pushing out false information, echoing with these troll farms that they use.

COMEY: And I think one of the most important thing we can do is tell the American voter what’s going on. You should be skeptical. You should ask questions.

RUSH: You mean the fake robots at Media Matters? Is that what you’re talking about?

COMEY: You should understand the nature of the news that you’re getting.

RUSH: This is incredible! We’re gonna inform all these people the IP addresses and the phishing attack and be on alert? Keep a sharp eye. We’ll share same thing with our allies. We’re gonna equip the American people our allies to understand big part of what the Russians did was pushing out false information with these “troll farms.”

That’s what Media Matters does! That’s what happened to O’Reilly. That’s how they tried to get me to the. The Stop Rush movement was 10 people making themselves look like 10,000, sending emails to people they don’t know they’ve never heard of. It’s bots that are doing all this. The latest series of Homeland actually illustrated how this is done in one of the storylines. This is just… It’s… I don’t know how to describe this.

“What do you mean?” Okay. Let me see if I can describe what I mean. You tee off, and you drive your cart to your shot. And let’s say your shot is in the left rough. And there is a hill right beyond your ball that is too steep to drive the cart down. So if whoever I’m with drives that cart right up to the ball, facing the hill, the only way out of it is to put it in reverse and then turn right to head back down the direction down the fairway. When I drive, I leave the cart in the position I’m gonna be going after I hit ball.

If the guy I’m with doesn’t even — is not even aware of that, just gets to the ball and maybe have it parked five feet from the ball… Two weeks ago, the caddie was driving. I actually grabbed the wheel while he was steering it, turned it 90 degrees. It was about the 14th hole. I was fed up with this. I’d have to get in the cart and have to hit reverse every time. “What the hell? How about a little situational awareness.” That’s what situational awareness is. Situational awareness is also called defensive driving. I use it every day leaving our private, secret building here.

If you’re not careful, you zam right into a pedestrian who wouldn’t know you’re exiting the building. Gotta be extremely careful. So if I’m playing well, I’m a ball to be in a golf cart with. If I’m not playing well, you don’t really… Don’t talk to me — and don’t pretend that you care ’cause I’ll see right through it. Especially if people I’m playing are happy I’m screwing up, don’t try to act like you’re not happy. Don’t try to fool me. I’m too aware. Anyhow, so, I’m situationally aware.

So I hear yesterday Hillary go on and on and on about Comey cost her the election by going to Congress and announcing that he had to reopen this because of these emails they found on Danger’s computer that Huma had forwarded there. And then today, the very next day, Comey comes out and says he feels “nauseous” that he had to do that.

Now, I’m sorry, I find it a little beyond coincidental that Hillary would say one thing one day and then Comey comes out and echoes it the next day? That, to me, is a giant setup done on purpose for the Drive-Bys to carry the narrative that Hillary was shafted by Comey — and that Comey, for whatever reason, doesn’t mind being pain to the woodshed over this.

RUSH: Okay, so look at this. Yesterday we have Hillary saying (paraphrased), ‘The Comey appearance before Congress, reopening the investigation into my emails, that killed my campaign. That’s the reason I lost.” Comey today testifies, “I was so nauseated! I had to reopen the investigation. I felt so bad! I hope I didn’t affect the outcome of the election. Oh, my God, I can’t live with myself if I did!” Just now, Nate Silver, FiveThirtyEight: “The Comey Letter Probably Cost Hillary the Election.” The charts, graphs, are six pages when you print it out.

He plugs it on Facebook by saying, “So I have a long article up on the Comey letter and how the media covered it. While the headline’s fairly clear, even a small Comey effect would be enough to swing the election to Trump. I encourage you read the whole article.” I submit to you that this is not coincidental. Hillary and her appearance yesterday blaming Comey, Comey today taking the blame and crying about it, and Nate Silver confirming it. We’ve got a new narrative!

Comey cost Hillary the election — and the god of the left and their polling data, Nate Silver, has confirmed it now. But stupid Nancy Pelosi has blown the whole thing to smithereens because just out now at the Weekly Standard: “Amid a tense Democrat debate over when pro-lifers have any place inside the Democrat Party, Nancy Pelosi delivered a blunt message to her fellow Democrats: ‘Trump won because of the party’s rigid stance on abortion and other social issues.'”

Do you know this woman is…? They set this up. Hillary yesterday to Christiane Amanpour: “Comey cost me the election! He opened the case. He went back to Congress! He cost me the election.” Comey (sobbing), “I can’t live with myself! I opened the investigation and cost Hillary! I hate to think that I did it.” Nate Silver comes up today and says, “Yep, I can prove it! Comey lost the election.” Pelosi says, “No! Our rigid stand to abortion cost Hillary…” (laughing) Nancy, make sure your bodyguard detail is very close the rest of the week. (laughing) She just blew up their narratives. She just blew it to smithereens.