RUSH: Well, well, well, we have the president’s first hundred days now officially in the can and now under review, and as part of that review former President Barack Hussein Obama.

ANNOUNCER: Now, after being voted off the island we bring you President Obama with his critique of President Trump’s first hundred days.

OBAMA: For the record, I was not voted off the island. I was asked to leave. Now, Donald Trump’s first 100 days have been nothing like my first 100 days. On day one I changed the direction of America. I closed down Guantanamo, traveled and apologized to nine foreign countries, bowing all along the way, to my Nobel Peace Prize later that year. I passed the stimulus plan that the grew our economy at an unprecedented 1.5% per year for a record eight years.

By contrast, in 100 days, President Trump has only traveled to and talked to Americans raising economic expectations unnecessarily. He attempted to close our doors to the best and brightest strangers from seven known terrorist hot spots in the Muslim world, slowed the peaceful unchecked border crossings along our southern border by 73% and promised to do more. He bombed the Syrian government without an apology or promise to rebuild their airfield and angered the moderates in North Korea.

And after all the campaign rhetoric, he had to admit that Obamacare was actually worse to get rid of than he thought it was. After a painful 100 days, it’s time for Donald Trump to return to the values that have served our country for the last eight years and give up after his dramatic failure to lead the world and our country.

ANNOUNCER: Look forward to more gifted guidance from the most memorable and beneficent Barack Hussein Obama. 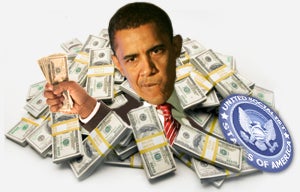 RUSH: By the way, snuck in an additional $400,000 speech. He gave a 90-minute speech to the advertisers at the A&E network, Arts & Entertainment. That’s three 400 grand speeches that he’s given here in the last — well, two scheduled or whatever, three of them when it was reported it was gonna be two. And there are Democrats coming out of the woodwork not happy about this. Pocahontas Warren, Elizabeth Fauxcahontas was very, very unhappy about Obama doing all of this. It’s just too much money.

Crazy Bernie’s wife is under investigation, by the way, for some shenanigans she was involved in in a fake foundation from which she profited a couple hundred grand. Didn’t hear about this during the campaign, obviously. We’re learning about it now.