RUSH: Oral arguments today over Trump’s travel ban.  I have relevant transcripts that I want to share with you here involving comments and questions from the chief justice, John Roberts, and Samuel Alito — and even some from Justice Kennedy.  I think Roberts and Kennedy are considered the swing votes here.  Now, to set this up and refresh your memory, one of the first things that happened after Trump was inaugurated was a travel ban on a certain specific number of countries. Not all of them were Muslim, but some of them were.  The left immediately…

They already had people in position at the airports just waiting for the go signal. The media portrayed this as a spontaneously combustible protest, but it wasn’t spontaneous. Paid protesters, mobs were on hold and stationed at various airports, malls, and other public places, waiting for Trump to do anything that would warrant a protest.  Here came the travel ban! The phone call was made; massive amounts of people, thousands of people made to look like they are showing up protesting at airports, shutting down operations over Trump’s travel ban.

Leftist activists attempt to claim in federal courts that the travel ban is unconstitutional on the basis of what Trump said during the campaign, not what the order said! And judges in Washington and Hawaii agreed that what Trump said on the campaign trail was enough to invalidate his order, even though his order was not discrimination against Muslims, majority Muslim countries, or what have you. 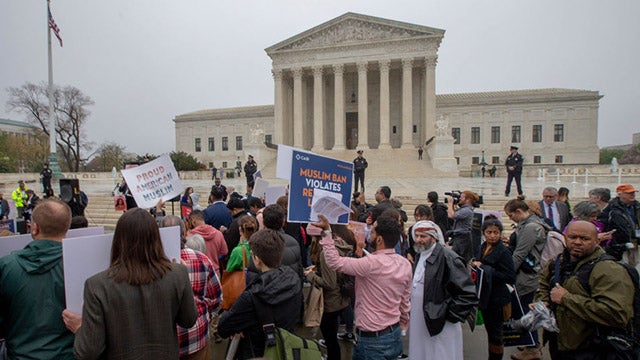 And yet it was portrayed that way and two federal judges continued to stay every revised order the Trump administration come up with. This was destined to go to the Supreme Court and today it got there in the form of oral arguments.  If we had lost the court, the court would agree with these federal judges who said what Trump said in the campaign trail is enough to suggest that his order here on a travel ban is discriminatory and therefore unenforceable.

And the lawyer opposing Trump’s travel ban, some guy named Katyal, is arguing that what Trump said on the campaign trail is of use in determining the anti-Muslim bias of Trump and thus his travel ban or his order. So I have here a good section from the oral arguments, Justices Kennedy, Roberts, and Alito. Kennedy and Roberts were seen as the decisive votes on this before it all started.

So, remember, this is just oral arguments. So the anti-Trump lawyer, Mr. Katyal, says (paraphrasing), “Again, we wouldn’t have a problem with it if it was tailored to a crisis and that it would sunset at some point down the road. And, you know, can be re-upped or something like that. But that’s not what Trump’s order says. This is about a perpetual problem, a perpetual anti-discriminatory ban on Muslims.”

Justice Kennedy: “So you want the president to say, ‘I’m convinced that in six months we’re gonna have a safe world?'”

In other words, Kennedy said, “Wait a minute, you want a sunset on this order, so you want the president, in putting this order into effect, to say he’s convinced in six months that we’re gonna have a safe world and we can lift this? You want to tie his hands, you want me to tie his hands?”

Katyal says, “Well, no. No, Justice Kennedy, that’s not our argument. Our argument is here the president’s identifying something that’s a perennial problem. Our brief says it goes back a hundred years, you know, when the Soviet Union was around. We don’t have countries that cooperate with us in vetting. And the solution’s always been from Congress not to have a flat ban, but instead to have a fine grained vetting system to balance these considerations.”

This guy is saying Trump’s travel ban’s too overbroad, we can’t do it in cooperation with other countries. We need to do it person by person by person, have a vetting system person by person. Chief Justice Roberts says: “Okay. Well, what if military advisers tell the president that, in their judgment, the president ought to order a strike, an air strike against Syria?”

And the guy says: “Absolutely not. There’s nothing to do with the text of the statute. That’s not at all what we’re talking about here.” But Roberts has made the point. Justice Alito: “Mr. Katyal, would any reasonable observer reading this proclamation, without taking into account statements, think this was a Muslim ban? Read the actual order, Mr. Katyal. Would anybody think that this is a Muslim ban?”

And Alito says later, “It does not look at all to me, sir, like a Muslim ban. There are other justifications that jump out is to why these particular countries were put on the list. It seems to me the list creates a strong inference that this was not done for invidious purpose.” Now, this reading of the order could have happened with the first judge! The order was entirely constitutional! The original travel ban, because the president has full and total authority, by statute and by precedent — I don’t want to revisit what we did at the time. But don’t doubt me.

A legitimate, nonbiased, nonpoliticized judge would have read the original ban as not a ban on Muslims. But what the original federal judges did, “Yeah, maybe so, but listen to what Trump said on the campaign trail. It’s clear he hates Muslims, and so we’re not gonna allow this ban.” And Alito is saying it has nothing to do with it. He’s not banning more than 8% of the Muslim population.

So two federal judges. You and I all know the corruption of the federal court system by virtue of leftists populating it for the purposes of losing elections insurance. But this trail of destruction is continuing right in front of us, unabated, as they find no evidence of their claims, they’re on to something else just as baseless, just as absent evidence.

Who’s there to tell them to stop? It used to be the system. The system. It used to be adherence to the norms of our Constitution, the rule of law. None of that matters to the radical left that’s now hijacked and populates and dominates the Democrat Party, and they are at the same time the U.S. media.