The Swamp Has Trump Outnumbered — But He’s Still Standing

RUSH: This is Harry next, Valparaiso, Indiana. Welcome, sir.

CALLER: Hey, thank you very much, Rush. Hey, the reason I wanted to call — it’s a very serious question, not facetious at all. And that is, Trump won the election. We voted for him. We control both the House, the Senate. Trump at the head of the Department of Justice. And yet after all of this we look up and Trump’s lawyer’s office is getting raided. Not the Clinton Foundation. Not Perkins Coie. And I don’t understand that. Is there a reason that can be easily explained?

And I know about the swamp and so forth. But I think if Perkins Coie got raided tomorrow based on what Trump ordered Sessions to do or whatever, this stuff would come to a grinding halt immediately. They would stop. And it’s like punching a bully back. I don’t understand why we’re just letting them — I mean, eventually they’re gonna find something. They’re gonna find a tax return from 1982 where Trump took an extra $200,000 that maybe he wasn’t entitled to, and there will be a “a-ha, we found it.” I don’t understand why they don’t just put an end to it by fighting back.

RUSH: Well, you know, you say you know about the swamp and you’ve heard that explanation. And that really is the explanation, as unsatisfactory or unsatisfying as it is. Trump, I don’t know how many are in his close circle that would constitute the real Trump administration and so forth, but I’m telling you, he is vastly outnumbered.

And I’m saying this independent of Jeff Sessions. Jeff Sessions is a wonderful guy. He is a tremendous patriot. But he is not — my term for it is he’s not a warrior attorney general. He is someone who has a profound respect for the law and sees the job of attorney general, administering it, managing it on a federal level but not using it as an attack agency or even as a defense agency.

There aren’t a whole lot of Republicans themselves who are used to going on attack. Republicans’ lives have been spent on defense their entire lives. The Democrats and the left literally do run that town. And that’s why I’ve always said it’s gonna take more than one election, way more than one election to actually stop the direction that we’re headed in and turn it back and reverse it.

I’m like you. Your question is utterly dripping with common sense. We won the election. It was a duly constituted and fair election. We won the presidency. We have the House of Representatives and the Senate. Therefore Trump’s people theoretically staff the president’s cabinet and the American bureaucracy. And by all rights, all of the criminality engaged in by the Clintons and by the Democrats ought to be under investigation.

It defies common sense. Trump wins and he’s under investigation? And now we learn on an entirely bogus premise, and nobody can end it. And, meanwhile, the collusion and the actual rigging of elections is now widely known and accepted to have been all on the Democrat side.

It’s kind of like the Valerie Plame story. Before that special counsel began its investigation, everybody knew who the leaker was. It was Richard Armitage, who was never charged, who was never fingered, who was never in jeopardy whatsoever, a guy that had nothing to do with it is found guilty!

The Washington establishment is a very, very powerful, exclusive and august club, and their power resides not in who wins and loses elections. And that is their great strength. They remain in power and run that town whether Democrats or Republicans win the presidency and the House and Senate. Now, it’s not quite that simple, but I’m giving you an overview here. You think that answer doesn’t fully explain this, and I’m telling you it does.

And, you know, Trump would be desperate to, I think, have Hillary investigated, and he could make it happen. Look, the FISA warrant application, for example, if Trump wanted to, he could make it all public today. The president determines what is classified and what isn’t. I know a lot of people curious why won’t Trump just blow the wall down and reveal all of this?

You know, everybody’s wondering, did they use the dossier for the FISA warrant application or was there more? Trump can find out, he can demand to see it and he can declassify it if he wants to. And the fact that he doesn’t and hasn’t has a lot of people scratching their heads as to why.

I have no clue. I can’t answer the question for you. I just know the history of Washington and you tell me, how often do Democrats get investigated for what they do? How many Democrat presidents have been treated like Trump and Richard Nixon have been treated? For that matter, how many Democrat presidents get treated like George W. Bush was treated? Bill Clinton never was, despite what he did. And Barack Obama? To this day, Barack Obama remains clean and pure as the wind-driven snow and a great hero. 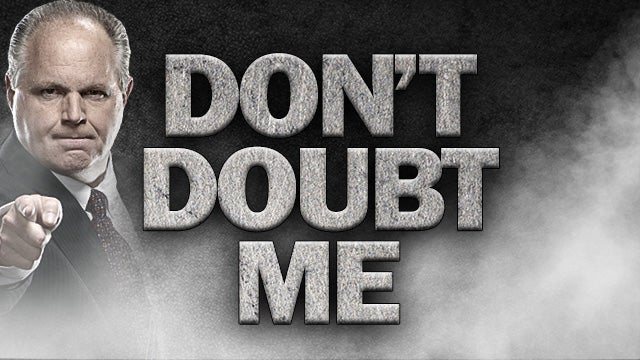 And I’m telling you all of this that we’re talking about that happened regarding the investigation, Russian collusion, the use of the deep state, Obama and his team did all of that. It’s not Hillary. It was done for Hillary, but it was done to shield Obama in many cases, but to also do his dirty work for him, all of it designed to protect his legacy and some other things as well. It’s a curious, curious thing. I just think it’s gonna take a little bit more time with Republicans actually having electoral power.

That’s why the midterms, I think, are kind of important. So is 2020 with the presidential race, if Trump’s on the ballot, it doesn’t matter. When I say it doesn’t, the Washington establishment’s power exists regardless who wins elections; that’s true. But one of the reasons it works is because Republicans are so used to rolling over and not really fighting back because that’s what they’ve been always had to do to stay free, if you will, within the swamp or within the establishment.

Anyway, I know it’s frustrating. You just have to keep plugging away at it each and every day. And, you know, elections matter, and public opinion does matter. A lot of people think that it doesn’t. But it does. And I’ll just recycle a point or opinion that I offered last Friday. From the get-go — and I’m talking about a select few number of people here on this whole Trump-Russia collusion thing — a select few people have known from the beginning that it’s been bogus from the beginning.

There are people behind this investigation, behind this charge, behind this whole movement who’ve known from the moment they first mentioned it that it didn’t happen. There are people who have known Trump didn’t collude, that the dossier is fake, that there weren’t any prostitutes that peed on a bed, none of it is true. The exact opposite is true. And yet what has all this been about? 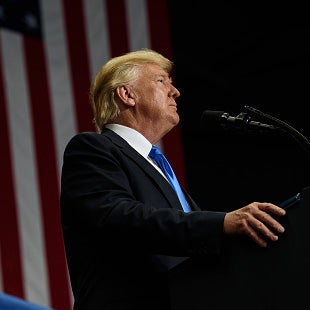 They have been trying to drive Trump’s approval numbers down to the twenties and thirties. And if they could have done that, then invoking the 25th Amendment, which says he’s unstable, he’s unfit, or actually moving on impeachment, if he’d gotten down to the twenties or thirties the Republicans might have gone along with impeachment.

But this whole thing has been bogus in terms of substance and reality and truth from the beginning. It’s all been an effort to create vast disapproval, dislike, and anger at Donald Trump. Because if they had succeeded — and they thought they could do it in six months — then getting rid of him becomes markedly easier. You don’t have to wait for an election. Because the American people, by virtue of those numbers, would practically be demanding it. A president with 20% approval, 25% and the never-ending drumbeat that would accompany that, that would have been the way to get the guy out of office and how to overturn the election.

They needed public opinion. They have failed. They’ve failed to get public opinion. Trump’s approval numbers now steady at 50, maybe 51, some polls 47, 48. But they failed miserably. Now they’re dropping it. Now they’re going to what they really think they might have Trump on is some serious lawbreaking; that’s with his lawyer, Cohen.

They still don’t have anything. So now their eggs are in the Cohen basket and the midterms. But even if they win the midterms, if Trump’s approval numbers are 45 to 50% there’s no way they’re gonna succeed in impeaching him. Well, I shouldn’t say “no way.” There’s always a way they could do it. But it’s gonna be demonstrably harder if his approval numbers stay up. And the economy looks like it’s gonna help keeping his numbers one.

RUSH: Back to the phones. Tony, Knoxville, Tennessee. Great to have you, sir. I’m glad you waited. You’re up.

CALLER: Hey, quick question. This might sound somewhat conspiratorial, but my question is, would you think the establishment Republicans would be willing to throw the elections in November?

CALLER: Yeah. To basically get the Democrats in there, go forward with the impeachment, and they’ll fix everything again in 2020? 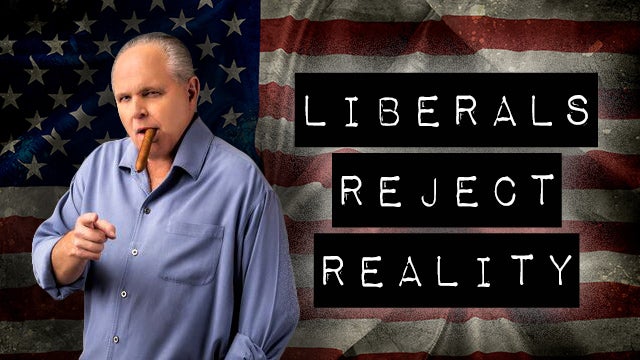 RUSH: Well, look. As far as I’ll go on that is this. You and I both know that there are a lot of elected Republicans that do not like Trump at all. One of them is Jeff Flake. Depending on what day you talk to him, Bob Corker is another.

RUSH: There’s a bunch of them in there. Some of them are running for reelection. Some of them have announced that they are retiring and some of them have announced they’re resigning. But the nub of your question is are there Republicans who would sabotage their own party to get Trump? The answer to that is “yes.” But I’m not basing that on anything I know about this campaign. There were Republicans who said that during the presidential race in 2016.

I can’t remember the names, but there were Republicans that were Never Trump conservative media types who were saying it would be worth losing everything in 2016 if it meant getting all these ne’er-do-well conservatives and Trump people out of the Republican Party. I wish I could remember who it was. There were two or three of them. And I think one of them was prominent, who literally said it would be worth losing everything if it cleansed the party. It might have been some TV Republican strategist or something. I’m not sure which.

But there were at least three of them that I recall, or maybe it’s three stories. I don’t think it was George Will. I think George Will recently said that he can’t be a Republican anymore. But, no, during the campaign — it might have been some other candidates. For some reason I’m thinking Kasich, but I know that there were Republicans that were thinking if Trump is gonna win, then it’s worth us losing everything if that’s what it takes for Trump to lose.

Oh, wish I could remember who it was. Maybe we can do some fast research here in the break and find out. But, yeah. If somebody said it once back in 2016, and the anti-Trump sentiment’s still there within certain sectors of the so-called conservative intellectual crowd and the RINO moderate Republican crowd too.

Whether that’s gonna happen, that’s another thing. It’s easy to talk that way six months from an election. But when you get right down to when the election approaches and so forth, following through on something like that is probably kind of doubtful. But I don’t doubt that there’s some Republicans individually who would do it themselves.