RUSH: You notice we haven’t talked Comey yet today? Anybody upset by that? Brian is shaking his head “no.” Dawn? Not bothered by that. What about you, Snerdley? Yeah, but I’m gonna have to. I have to devote some time to Comey each and every day. One thing I’ll say about Comey. 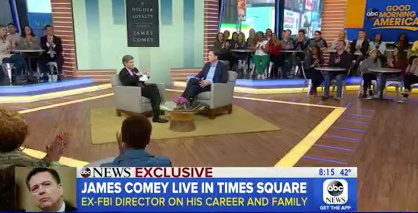 I got in here today, sit down at the real radio announcer desk here that I use, and turn on the TVs. I start getting ready to absorb stuff as show prep, and the TV comes on with Comey being interviewed by somebody somewhere, doesn’t matter where. And he’s answering personal biographical questions, such as where he went to school and what color the grass was on the field where he played when he was a kid, things like this, Oprah type stuff.

And I’m thinking Comey doesn’t have this kind of a bond with the American people. People are not interested in what made James Comey who he is. People don’t know Comey well enough to care about how he turned out. People are not interested in James Comey in terms of what they can learn about living the good life or the right way. And yet I believe Comey thinks that he has achieved that.

You know, this is not an insignificant point. Hillary Clinton never did establish a bond with her supporters, a bond of loyalty and genuine love and support, and not very many people really do on a mass basis. And Trump did. Trump had that bond, you could see it from day one, first rally. He has not lost it. He still has that bond. It has to do with the person. Trump has the ability to reach people and form invisible bonds of support. Something about Trump people instinctively associate with and they want to have his back, and they want him to win, they want to support him and all of that.

Comey hasn’t gotten there yet. Comey is a figure of curiosity right now. But I don’t think anybody is really looking to James Comey to learn life lessons. But if Comey thinks so, if Comey and his handlers believe that the American people have fallen in love with him, well, then he does have an ego problem, and he’s even acknowledged that. He acknowledged that in the interview with Stephanopoulos. That he sometimes has trouble keeping his ego in check. I’m gonna tell you, that’s not a good place to be, thinking that you’re something you’re not in the eyes of either an audience, or in this case the American people.

But it results from Comey believing his press clippings and what people close to him say, build him up, “You’re the greatest, man. People love you out there.” The worst mistake you can make as a public figure is to misunderstand how you are seen. And Comey simply hasn’t had enough personal exposure to people. Well, he’s had personal exposure, but he hasn’t had experiences where he has effectively reached out and created a bond with people. 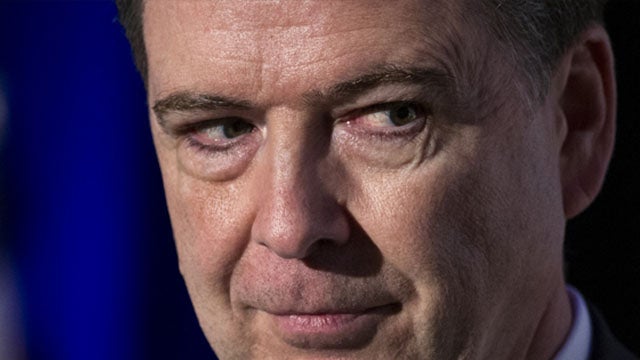 He’s a figure of curiosity. People are curious who the guy is, what he’s gonna say, what his book’s gonna do, what’s gonna be the impact of it, but James Comey personally has not yet reached this special status that I think he believes he has achieved. And I think a lot of people make the mistake, because they end up buying or believing the fawning media that they get.

I have often thought that if, when I started, the media had loved me, I don’t think I’d become what I have become. It’s a fine line. It’s a fine point. But I really don’t. In other words, I am so grateful that I’m not who I am ’cause the media made me. ‘Cause if the media can make you, they can destroy you.

If you’re big and famous and loved and adored because of the media, well, they can make you hated and despised overnight. But if you become whatever you become because of a strength and a bond, relationship with your customers or your audience or the American people, then the media can’t destroy that; only you can.

And I think Comey may do a lot of damage to himself here by running around and carrying himself as somebody the American people think is really special and that they want to protect and make sure this guy is not railroaded, he’s gonna make a grave error here. And that’s the first thing I thought, “What is Comey doing answering questions like this? That’s not what people care about right now. There isn’t any personal investment in James Comey yet.” But with as much media cover as he’s received, you could easily, if you were in his shoes, think the opposite.

RUSH: Here’s Michael in Bloomington, Illinois. Great to have you, sir. Hello.

CALLER: Hello, Rush. First of all, a quick thank-you for taking the time over the last two years to learn about the Trump voter. A lot of people just have an opinion right away, and I appreciate the fact that you listened before you spoke.

I have a comment about Comey. It’s interesting we’ve been told for a year and a half now how nonpartisan he is and we’ve had little facts to dispute that. It’s interesting, on Monday, his wife gave an interview, and she removed any doubt. The first thing she said was she was devastated by Hillary’s loss. And then she said, “I have a lot of friends that work for her.”

RUSH: Well, you know, it’s interesting that you make this point here. Because you’re right about one thing. Comey, we were always told he was impeccable, that his integrity — I remember hearing this about Comey way back when he worked for Ashcroft. We’re going back to George W. Bush’s regime and the first four years. Everything about Comey was cultivated, perfect reputation, nonpartisan, law and order by the book. And he was not corruptible. This is the reputation James Comey has had, and back then it appeared to be legitimate. It was from coworkers, it was from everybody.

Then this happens. This whole Trump getting elected thing and Comey has blown his cover. He is obviously partisan. He is obviously an elitist and a self-professed member of the club of elites. His wife, Patrice, you’re right, and his four daughters, I believe, his wife was at that vagina hat rally after Trump was elected. There are pictures of her out there with a couple of her daughters. She was adamantly pro-Hillary for the longest time.

Now, there are relationships where one spouse is conservative, the other liberal. In Hillary’s world, the husbands of course put their boots on their wives’ throats until their wives agree to vote the way the husbands want. That’s in Hillary’s world. But you and I both know that some spouses are independent. So just because his wife is one the way or another doesn’t tell us anything conclusively about him, but his wife was radically for Hillary and so forth. And he himself made it abundantly clear that he was too. And he’s going out of his way to try to apologize to her now. And this episode that he’s — I keep circling back to the episode, October 28th, couple weeks, 10 days before the election, where he announces he’s gonna reopen the email investigation ’cause he promised Congress if anything happened that he would.

And he supposedly discovered some of Hillary’s classified emails were on the computer of Anthony Weiner, Carlos Danger, who had been tweeting nude photos of himself to teenage girls. So they opened investigation and close it rather quickly. And Comey in his book is apologizing to the Hillary, “I feel so bad, I may have hurt –” Because Comey said he did it because he knew she was gonna win, he was relatively certain she was gonna win.

But he’s missing the point. The reason that he did this is precisely because he thought she was going to win. He could have done this at any time. He didn’t just discover these emails were on Weiner’s computer in late October. He knew this back in the summer. He waited until October strategically because, in his mind, doing it so close to the election would cause her the least harm, because it wouldn’t give the Trump forces enough time to really amplify it and use it because that close to the election, people’s minds are mostly made up. That’s the theory.

And he thought he was helping her by doing this so close to the election. He really did. And I think Hillary needs to look at it that way. He was actually trying to help her. And he, in a roundabout way, admits that in his explanation for this. But, but that’s neither here nor there, because what he ultimately admits is that the director of the FBI is conducting investigations and making investigation decisions based on polling data as it was applied to one candidate.

This is nowhere in the detective manual. You know, the Dick Tracy detective manual does not have anything in there about using polling data on candidates if you’re investigating one of them for any kind of criminal activity. By doing that and by admitting it, Comey has just admitted that there wasn’t anything about right, wrong, law and order, or anything else involved in this investigation. He thought she was gonna win. She was gonna win so big, she was gonna win so decisively that it didn’t matter that he was doing this on October 28th.