RUSH: Now, the Comey book. You know, folks, the Drive-Bys are breathless about this, ’cause there’s only one reason for this book. There’s only one. This book is… Just consider it from the same arsenal as the Mueller investigation.

The purpose of this book is to get Donald Trump. There’s another purpose of this book, and that is to portray James Comey as an egotistical savior of not only the country, but of the presidency and so forth. This is the most self-absorbed, narcissistic exercise from someone we’re told is not any of that. Just like we’re told Mueller is the epitome of integrity. I don’t know whether you know this or not, but Comey had the same kind of reputation for years, going back to when John Ashcroft was the attorney general and Comey was his deputy.

Comey had an impeccable, unassailable reputation — and as I grow older, I’m finding that most people about whom that is said are people who have cultivated it. They want that said about them, and so they’ve lived their lives to get that assessment about them, rather than just live and do what they do and let the characterizations follow. These are people who manufacture these reputations as their objective, and that’s what this book is. It’s to kill Trump and to lift Comey up as Mr. Everything.

RUSH: I haven’t read the Comey book yet ’cause I don’t even have a copy, but I can tell you, folks: After, quote-unquote, “study” today, this thing… I’m already getting Comeytose. It’s just… And you know, this is just the beginning. This guy’s got a month of sales, book signings and tours and TV interviews. You’re gonna be so sick of this guy, and he has miscalculated this like you can’t believe. This guy obviously, from the parts I’ve read… Some of these things are literally incredible what he’s saying! 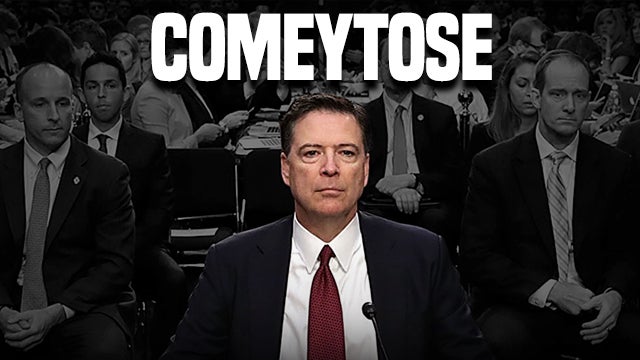 I can’t believe that he’s this brilliant, wise, high-integrity guy. Some of this stuff is so petty, some of it is so easy to poke holes at that I’m beginning to think this guy has bought all of his press clippings. Except he’s forgotten when the Democrats used to hate his guts and wanted him fired and wanted him frog-marched into jail for what he did to the Hillary campaign. Now all of a sudden they love the guy, because they think he is the best instrument of the moment to get Trump. This guy is gonna… I predict he is going to regret this.

I bet that it’s not gonna take long before even some of the people who he expected to be his staunchest allies in the media begin to pause and start wondering, ’cause this is not what they thought they were gonna get. Do you realize there’s not one thing… I shouldn’t say. There is so little that’s actually new in this book, and the Drive-Bys were looking for revelation after revelation after revelation, because they are convinced that Mueller and Comey and Brennan and all these Obama people are sitting on dynamite powder kegs of information, and they’re just waiting!

Mueller already knows it, and when Mueller announces the end of his investigation and issues his report, they all think that it’s gonna have bombshell after bombshell after bombshell that nobody could survive. So here came the first phase. This was supposed to be the first set of bombshells, and there’s nothing in it that the Drive-Bys haven’t already reported! The things that set it apart are Comey’s petty little opinions about Trump. (summarized) “His tie was too long.” “His face was orange with little half-moon cutouts over his eyes where the tanning goggles obviously were.”

“His hands were very small, and he’s much smaller in stature than I expected.” This is not how you drive Trump from office. It may satisfy some of the lunatic fringe out there, but this is not bombshell stuff that’s gonna get rid of Donald Trump, and I predict that in these people… Some people have paid 50 to 75 to 200 bucks for a seat at a Comey book signing where he’s going to supposedly make remarks. This guy has become so full of himself, you have…

This is why, on one hand, I am grateful the media’s always hated me. ‘Cause I think the big danger of having the media on your side is that you very quickly can mistakenly assume that you’ve become somebody you’re not. That you’re big. That you’re important. That everybody cares about you and that everybody is waiting for every word you utter. And clearly that’s where Comey is right now. Comey thinks the world is waiting for this book. Comey thinks the world and the people of this country are itching — they’re dying — to read this book because they know that James Comey is a man of truth and honor and whatever else.

And the truth is that, like practically everybody else, even at the highest levels of fame, at the end of the day nobody cares, ’cause everybody else is busy living their own lives. And they have their own challenges and their own concerns. And it’s very few people who actually live their lives through the lives of others. But Comey has obviously drank the Kool-Aid. He’s read the press, he’s watched the media, and he’s bought it. He thinks he’s the big guy. He thinks he’s cool. He thinks that he is universally loved and believed — and this, to me, is a setup for a backfire.

And I, frankly, think that we’re already seeing the early signs of it. For example, on America’s Newsroom today, “Chris Wallace, the anchor of Fox News Sunday, described … Comey’s forthcoming book as ‘bitchy,’ adding there weren’t any new bombshells in the book and instead a lot of ‘unpleasant’ opinions.” Wallace is one of these guys that says, “[W]hat strikes me, is how little new there is in the book.” Of course there’s little new in the book, and what Comey admits to in this book — and I’m gonna break it down, the things that I think are just mind-blowingly shocking.

The supposed meeting where Comey explains Trump dossier and the golden showers and the hookers peeing on the bed in Moscow? This is surreal the way Comey recounts this! It is impossible to think that he’s really this obtuse and blind about… Well, you’ll see when we get there and unpack that. But Wallace said, “We get a lot of opinions, unpleasant opinions of the president by James Comey. But in terms of hard facts, you know, people are talking about bombshells, there are none.”

Exactly! There aren’t any bombshells, because the Drive-Bys have done nothing but try to find bombshells on Trump for two years. They haven’t found any. They’ve had every leak of bogus, lying information. They’ve run with it at all. And yet they think somebody somewhere has that silver bullet. “Somebody’s got that smoking gun! Somebody’s got that one piece of information that’s gonna end Trump’s presidency that day,” and they think Comey’s book is it. And it isn’t. This book…

I don’t know how much damage it’s gonna do to Trump, but it is gonna cause damage to Comey that I don’t think he foresees. Of course, Comey’s in this for the money, like all these other journalists that are embedded with presidential campaigns and learn all this stuff, bombshell stuff that they hold and don’t report during the campaign. They save it for their books that come out six to eight months after the election. That’s what Comey’s done here, and here’s this little story. This just cleared the wires.

“ABC, CBS Taken Aback By ‘Petty,’ ‘Personal’ Comey ‘Score Settling’ — In a surprising twist, ABC and CBS journalists on Friday were taken aback by the ‘petty’ and ‘personal’ way in which James Comey goes about ‘settling some scores,’ even comparing [Comey] to J. Edgar Hoover. On CBS This Morning, Jeff Pegues highlighted Comey ‘taking shots at the president… talking about his height and some of his physical characteristics. This is James Comey definitely settling some scores here.’ Co-host John Dickerson” of Slay the Nation — now the moderator — I think he is. 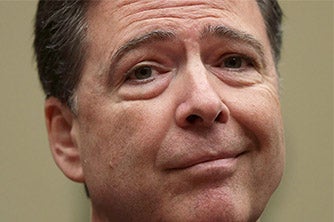 He said, “‘Comey is trying to say there are standards and a certain ethical bar that the president is beneath. But, you know, he makes little digs about the size of the president’s hands, talks about the color of his skin,'” and the length of his ties. It’s not exactly earth-shaking integrity stuff. … Journalist Cecilia Vega on ABC’s Good Morning America [said] … ‘[T]his line was, ‘Wow,’ to me. He said that he appeared… The President appeared orange from tanning.'” I mean, this is what we waited for? This is what we have all been breathlessly waiting for from James Comey is his reaction to the president’s skin?

And, by the way, this reference… I’ll tell you something else. This reference to the president’s hands? You know what that is, don’t you? Come on. We all remember this. I forget when it was specifically, but that was a joke that some leftists were telling. It may have been in the media. I think Trump was bragging about his sexual prowess at one point and somebody came along and said, “Well, his hands are pretty little and you know what that means about sexual prowess! Little hands, little you know what else.” So Comey… That’s exactly what this is.

This is Comey trying to comment on Trump’s manhood using techniques that have been used previously by media types. In that sense, you could almost say that’s a copy-and-paste job. Before long, before long somebody’s gonna say that the Comey book is nothing more than an expanded Christopher Steele dossier. Because it isn’t what these people have been breathlessly waiting for. And I want to find out… We’re gonna see if there actually is a month’s worth of intense media and public interest in James Comey, Modern American Hero, Saving America from the Kleptocrat Donald Trump.

We’ll just see how that works out. Remember, leftists don’t have a whole lot of money to be running around buying books like this. They’re gonna be trying to steal ’em or get the e-book or get a free version somehow. They’re not gonna be showing up and paying Comey 250 bucks to listen to him speak this stuff — and remember, Comey, for a while, would not testify before Congress. No, no! But looky. He’s putting out pulp fiction trash, much of it as unverified as Hillary Clinton’s phony dossier.

In fact, this book and Hillary’s dossier — the Steele dossier, Trump dossier, Hillary’s creation. They’re both hit pieces. Hillary tried to use her dossier as a hit piece to become president, and Comey protected Hillary! Comey protected that dossier! Wait ’til you hear the exchange. Well, you may have heard it. Wait ’til you hear my take on the exchange between Comey and Trump on the dossier. So Comey protected that dossier, protected Hillary’s hit piece, and is now using his to make millions of dollars and enhance what he thinks is an unassailable reputation — and to slime a president.

RUSH: Yeah, it was Marco Rubio who maze the small-hands joke about Trump and the ensuing laughter that resulted from it… Eventually, Rubio had to apologize. I don’t know if he had to, but he did, and I’m convinced that that reference from Comey is another more than a re-litigating of that old joke. People are gonna say, “Wait a minute. I’m spending whatever this stupid book costs to have somebody else rewrite what I’ve already heard about regarding Trump and the campaign and all that?”