Bernstein Celebrates! Cohen Raid Designed to “Scare the Hell Out of the President”

RUSH: I want to go back to Trump and the Cohen raid because I mentioned this at the top of the program. Here’s Bernstein. This is Bernstein of Woodward and Bernstein, this is Carl Bernstein. And he was on Anderson Cooper 99 last night talking about the FBI raid on Trump attorney Michael Cohen’s offices. 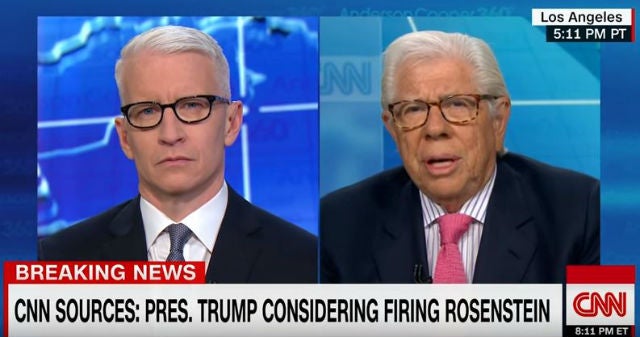 BERNSTEIN: This raid is about scaring the hell out of the president of the United States. And this has been Trump’s biggest nightmare throughout this investigation. If those investigators find evidence of criminality and conspiracy between the president and his lawyer, that evidence goes back to the Mueller investigation.

BERNSTEIN: It does not stay with the Southern District of New York if it’s related to Russia in any way. And that also is a huge factor in this constitutional crisis.

Do you think that’s why the SDNY did this raid? Do you think the United States attorney, Southern District New York, in conjunction with the FBI agents who would actually do the raid, are sitting there saying, “You know what we need to do? We need to scare the hell out of this Trump guy. What can we do? What can we do to scare this guy?”

The FBI said, “Hey, let’s do a raid on his lawyer’s office.” And the U.S. attorney in the office of Southern District of New York, “Yeah, man, what a great idea, we could scare the hell out of the guy. Okay. You’re gonna do the raid, you get the guys to go in there and do the raid, and I’ll handle the attorney-client privilege aspect of this by going out and get this disinterested, dispassionate third party.”

RUSH: So Bernstein is frustrated that he can’t intimidate Trump, that he can’t scare Trump. So he thinks this scared Trump and that’s what the purpose of it was because to these people, this is personal. This is personal. Their visceral hatred of Trump is personal. And so they’re living vicariously through these investigations. And they are hoping and they’re imagining that what’s going on is what they would be doing if they were running these investigations.