RUSH: And did you hear about this? You all know who the mayor of New York City is, Bill de Blasio. I mean, this guy is himself a lunatic fringe radical, which makes him mainstream New York. A 42-year-old aide, woman, to de Blasio has been arrested for being in a car where there was an illegal handgun, and it was loaded. And in fact this handgun, it was a nine millimeter job, had its serial number filed off so that it could not be registered or tracked as stolen. 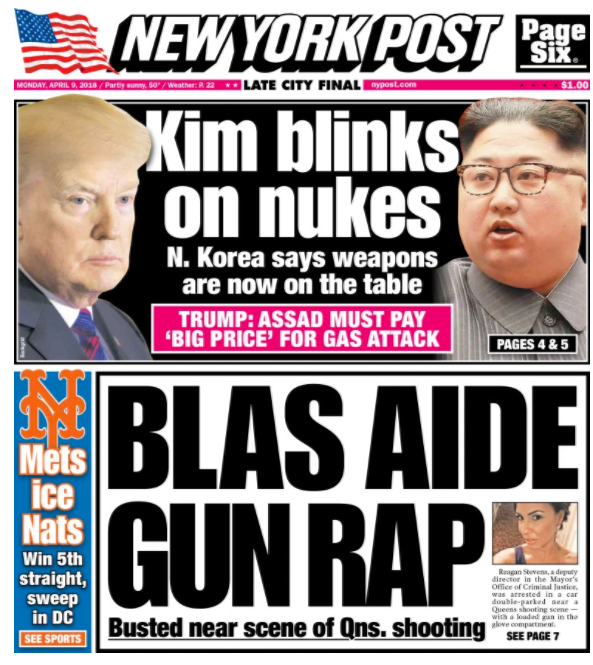 Oh, and there was also an eight-shell magazine in the car with a couple of cartridges missing. There’s also video that seems to show shots being fired from said car. Now, this 42-year-old woman, who works for Mayor de Blasio in Manhattan, New York City, was in the company of two young men aged 24 and 25, both of whom have pretty extensive rap sheets, including robbery and weapons charges.

Did I mention that the de Blasio aide’s $90,000-a-year job is quote, “Managing youth and strategic initiatives”? Did I mention that both of her parents are judges? I don’t think I told you that these two youths that she was palling around with her loaded nine millimeter serial-number-filed-off gun, these two kids, these two guys were carrying knives.

Now, what is a 42-year-old female aide to Bill de Blasio doing running around carrying a loaded nine millimeter gun with the serial number filed off? How does this happen? Do you think the guys forced her to be in that car with the loaded illegal gun? So this woman was minding her own business, guilty of nothing, and these two thugs come along, they had the gun, they forced her to get in the car and now she’s taking the rap for it? I guess, the way women are subjugated by men.

I hadn’t looked at it that way. She was minding her own business and these two guys come along and force her into the car, and then they’re stopped for double-parking so they blame her for all the violations. Yeah, that has to be it. There couldn’t possibly be anybody working for de Blasio with a loaded weapon in a car with the serial number filed off. Except, of course, there could, Mr. Snerdley.

This is exactly the MO of leftists. They run around and tell you everything you shouldn’t do and everything you can’t have, but they’ve got it. And they do it. And when you find out about it, you’re not supposed to question it because they are allowed. They are our leaders. They are the people taking care of us. They are our parents. And thus they are entitled to all of this. So far, de Blasio hasn’t had any comment, I don’t think. Haven’t seen any.