Voters Get Emotional Thanking the President

RUSH: Back to President Trump. He went to White Sulfur Springs, West Virginia, yesterday. And it was ostensibly a roundtable and meeting on tax reform. They had a script for Trump to read, and very early during the reading of the script he just threw it away. He said these are my remarks. This is so boring, I can’t believe — and he threw it away, and he just started riffing on whatever was on his mind. 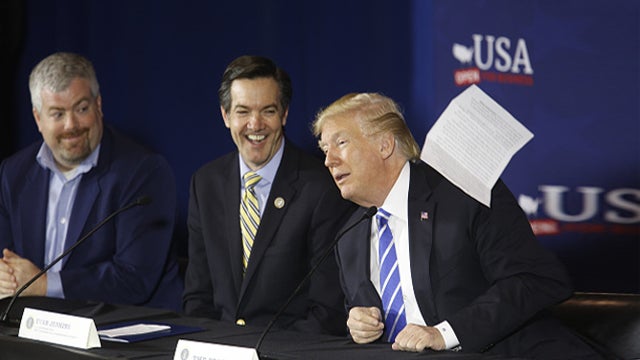 Here first is a Drive-By Media montage. We have here a roundtable discussion. It’s not the media. It’s Governor Jim Justice — you know, I’m really not sure what this is. Play audio sound bite number 11 ’cause it sets up what’s coming up next.

JIM JUSTICE: What he’s done that has impacted our state thus far has changed our state in so many ways, it’s unbelievable.

EVAN JENKINS: You made a promise to end the war on coal and you’ve kept that promise.

PATRICK MORRISEY: Thank goodness we now have an administration to work closely with who’s committed to regulatory reform, tax relief. We had the bull’s-eye on us until you got here. So thank you for that.

NATHANIEL BONNELL: Because of the Tax Cuts and Jobs Act, we were able to give every one of our 66 employees an additional thousand dollars over and above their normal, annual raises.

SEAN FARRELL: We made sure that everyone there knew that the reason they got raises was because of the new tax laws.

HUGH HITCHCOCK: This was much more than just crumbs. It makes a tremendous difference. And Mr. President — (applause starts) — I urge you to stay the course.

RUSH: Okay. That was Hugh Hitchcock. He’s Davis Trust president and CEO. These are West Virginians thanking Trump for the tax cut bill. And the first one that you heard was Jim Justice, who is the governor of West Virginia. So you had some political people, you had some businesspeople, CEOs. And it was pretty powerful. “Thank you, Mr. President. Keep staying the course.”

THE PRESIDENT: You know, this was gonna be my remarks. It would have taken about two minutes, but what the hell — (throws paper in the air, laughter and applause) That would have been a little boring, a little boring. No, I’m reading off the first paragraph, I said, “This is boring, come on, we have — (laughter) — we have to say — tell it like it is. We have to get Republicans in office.”

RUSH: So obviously some staffer had prepared a couple, three minutes of remarks designed to be milquetoast and inoffensive. And the president looked at it, said, “I don’t want to say this. This is dull, this is boring.” So he literally threw the stuff in the air, and he went into a riff on the military and immigration and tariffs, just fired both barrels, once again with no notes.

He cannot stand to be cookie cutter. He just can’t stand it. It was Washington-speak. It was a typical presidential statement designed not to make news, do not cause any kerfuffles, any ruffles, and he can’t do that. Then later in the meeting, a West Virginia woman broke down in tears. And she wasn’t the only one. Broke down in tears, tears of gratitude for Trump for what he is doing. 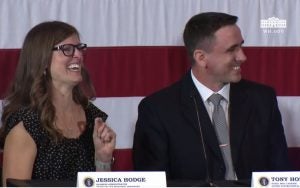 THE PRESIDENT: It will happen.

RUSH: Now, depending on where you went, you could find left-wing media types making fun of this woman. You could find left-wing media types reacting as, “You know, this woman, she doesn’t even have the slightest idea. She may have gotten a tax cut, but wait ’til she sees what’s gonna happen to her insurance policies because of what Trump’s done to Obamacare.”