RUSH: Snerdley brought me a story yesterday. Snerdley does his own show prep, and he finds things that he thinks I would be interested in and brings them in. And he came in with a story yesterday, told me about it, and I just looked at him with my mouth wide open and staring at him in total disbelief. And I said, “What?”

I said, “I don’t know what to make of this. Explain this to me. What exactly is happening?” And he explained it again. And I said, “To heck with this.” But I can ignore the story no longer because it has made the Drive-By Media now. People of the same age as the high school students in Florida, who are demanding that we all surrender our guns or, better yet, that somebody come take them, are engaged in other enlightened activities as well as gun confiscation.

And what it essentially is, is condom snorting. You heard that right. Condom snorting. Now, I can remember back the late eighties, early nineties, condom news would all be about the proper use of condoms. And you know back as recently as 1988, you could not say that word on the radio without getting in heap big trouble.

When I first introduced the condom update using Up, Up and Away by the Fifth Dimension as a theme song back in 1985, ’86 in Sacramento, I was on the verge — well, I wasn’t on the verge of getting fired, but I was on the verge of getting in deep trouble. Because church groups and Puritans, Victorians, all kinds of people, Sacramento elite society were complaining, calling the radio, “You can’t say that on the radio. Not only can you not say it, you can’t talk about it.” 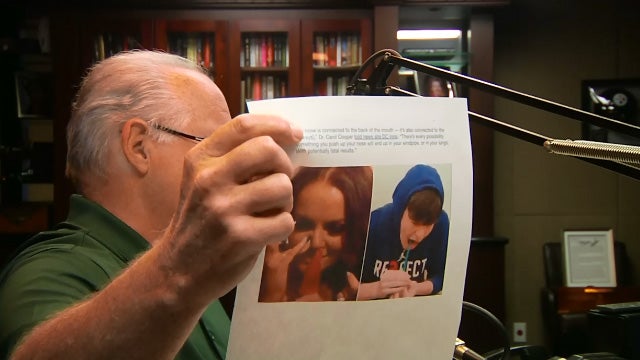 Of course, condoms were big in the news because of AIDS, and kids were being taught how to use condoms with cucumbers and so forth in schools. And so a condom update became necessary because there was new condom news every day it seemed like. There was new condom news, it was ridiculous and silly. And then, of course, it faded away, and condoms became as commonplace as anything else and no longer were controversial to talk about in any way.

But now the condom has made a reappearance in a new way. Condom snorting has become the latest challenge taking place on social media. New York Post says: “Condoms might make for safer sex — but they’re at the center of the riskiest new social media challenge. The viral video craze — dubbed ‘The Condom Challenge’ — is striking fear into parents as teenagers record themselves dangerously snorting the rubbers and pulling them through their throats.

“A number of clips emerging on YouTube show kids choking as they attempt to replicate the trend. Despite the health hazards, teens are jumping on the latest craze to get more attention on social media.” And I have here a — well, you know what? I didn’t send Brian the still shot, so I’m gonna have you zoom in here.

Here is a picture, ladies and gentlemen, of condom snorting taking place. If you’re actually watching here on the Dittocam, the woman on your left, the young teenage girl fresh off the get-rid-of-your-guns protest march is now snorting a red condom up her nose. Right there it is. And the guy on the right has already snorted a condom up his nose and trying to now get it out of his nose through his throat. By the way, my profile looks great there, don’t you think? Look at that! That’s an awesome profile. Maybe we ought to have the Dittocam on this version most of the time.

Anyway, if you haven’t heard about this, you will at some point. These are the same age kids that are marching, protesting, demanding that people give up their guns. When Snerdley told me about this, I said, “What’s the big deal?”

“No, it’s just silly. It’s just what kids do. It’s just the latest example of silly stuff kids do.”

You know when I first heard about toad licking? When I hear about that — and that was a big deal in the early nineties, because apparently if you lick the right kind of toad found in Colorado, you can get high. There’s some kind of a drug in the frog. So people are out there frog licking. And when I hear about this, you know, the first thing that comes to my mind is who originally thought of this?

There’s a frog sitting there, the frog’s somewhere, and who was it — I mean, somebody had to be first. Who was it that decided to pick up the frog and lick it to see what would happen? Who is that person? Same thing here with the condoms. Who in the world would look at a condom and think, “You know what? I’m gonna snort this thing up my nose and I’m gonna pull it out my throat.”

RUSH: I can’t believe this. (chuckling) We actually have a call from a medical professional who wants to respond to our story on teenage condom snorting.  If you missed this, it was mere moments ago, ladies and gentlemen, where people the age of the kids protesting guns have developed a new game of sorts: Social media condom snorting.  They snort… They’re not used, by the way.  I got an email.  They’re not used.  (Ah, we hope.)

They snort the condom through the nose and then attempt to reach down their throats and grab the condom and pull it out.  So it’s… It’s rapidly developing as a highly skilled talent that teenagers are attempting here.  We have Steve in Beaverton, Oregon, on the phone here.  He is a retired chiropractor and he wants to weigh in on this.  What’s up, Steve?

CALLER:  Hey, how you doing, Rush?

CALLER:  Second-time caller.  This is truly an honor.  When I heard you talk about the condom snorting — ’cause I saw that article a couple days ago.

CALLER:  And I’m thinking, you know, chiropractors have been doing this actually since the sixties.  There was —

CALLER:  No, no, no, no, no, no, no.  That’s not exactly what I’m… There was a doctor.  His name was Richard Stover (ph) in the sixties. He was a naturopath chiropractor, and he took a finger cot — which is similar to a condom.

CALLER:  Yes. (giggles) And he attached it to a blood pressure bulb.  He just took the bulb off the blood pressure… You know, the part where you squeeze it to increase the pressure around the arm. He took that off, he attached a finger cot to it, and he inserted the finger cot into the nasal cavity of his patient and then he would pump up the finger cot. It would exert a tremendous amount of pressure. It would expand, and what it actually does is it loosens up the cranial bones in the skull, and it’s a very effective technique for treating things like migraine headaches, sinusitis, sometimes like, um, um, if a child is —

RUSH:  What about deviated septum?

RUSH:  You’re kidding me!  I just threw that out there. I was just joking.

CALLER:  No.  No.  The technique is called nasal specific.  You can Google it.  There are — there’s a bunch of websites out there.  There are videos.  I got colleagues of mine… I’m in Portland.  This is where the technique was developed —

RUSH:  But you should not try this at home, right?  You need a medical…?

CALLER:  Well, no. You need to be trained because there are some hazards to it.  Now, the kids aren’t doing it exactly the same way.  They’re not inflating the condom.  They’re just inhaling it.

RUSH:  They would have to. To snort is to inhale.

CALLER:  Yes.  But what the chiropractors do is they insert the finger cot to a certain distance and then they inflate it, and it’s the actual inflation which causes the pressure on the bones that actually move the bones and —

RUSH: It opens up pathways.

RUSH:  Okay, since you explain IT this way.

CALLER:  Yes.  Yes.  And it’s been researched, and there’s peer reviewed articles that have been published and —

RUSH:  Who would have ever thought…?

CALLER:  I personally treated patients with this technique, and I’ve had tremendous results with things like migraine headaches.

RUSH:  Finger cots.  Okay.  Let me explain that, because Snerdley’s looking at me like, “Finger cot? What…?” If you get eczema or any kind of a skin disease on your finger and they give you an ointment for it, you put the ointment on your finger and then the finger cot over the finger to keep the stuff from evaporating. Have your pores open. Have it seep deep down in there to get rid of whatever problem you have on your… (interruption) Latex.  It’s just like a condom.  It is.  Just think of a finger condom.  They don’t call it that, obviously.  They call it a finger cot, and they come in different sizes based on the finger being treated here.  But, yeah.  And, you know, for… (interruption) Well, certain guys, I think, could probably get away with a finger cot, but they wouldn’t want to admit it.

RUSH:  Who knew that we’d get a serious medical call on condom snorting!  I mean, look at what you can learn each day on this program.