RUSH: The Drive-By Media is apoplectic. The Kremlin just announced that the president, President Trump invited Putin to visit Washington and the White House on a phone call they had on March the 30th. The media is acting like Trump may not know that he invited Putin because it’s the Kremlin that announced it. And so they’re running around, “Oh, my gosh, oh, my gosh! Trump’s partner in crime in colluding is actually coming to Washington! How brazen!” 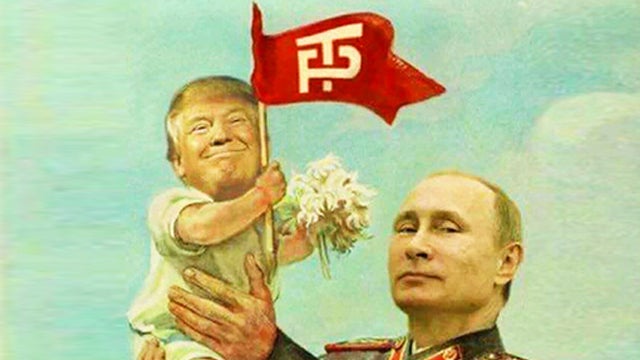 The theory is that Trump and Putin are doing this on purpose to be in the face of the special counsel Robert Mueller. I’m not making this up. Now, you may not see those exact allegations word-for-word in the media, but I guarantee you, I know these people in the Drive-By Media like I know every square inch of my glorious naked body, not just the back of my hand.

And so this is a joint effort for these two guys to show up in the middle of Mueller’s investigation and basically try to intimidate him with a couple of photo ops. Whether they’re printing it yet or not, I can tell you with relative certainty, assuredness, that this is what many in the Drive-By Media, this is the way they’re gonna look at it.

That angered the media because the media desperately wanted a summit between Reagan and any Soviet leader because back then the media and the Democrats thought that Reagan was an incompetent, bumbling fool cowboy who might accidentally hit the red button to launch nuclear weapons, which of course is not how nuclear weapons are launched. But if you’re not old enough to remember this, and I know it may sound funny, this is exactly what was going on. The media was just paranoid that there would not be a get-together between the Soviets and Reagan.

Back then the only way to postpone disaster was to have a summit meeting. Now look. Now here’s Putin saying (imitating Putin), “Hey, Trump’s invited me to come to Washington. It happened in a phone call on March 30th.”

RUSH: Here is Keith in Naples. It’s great to have you. I’m glad you were patient. Welcome.

CALLER: Thank you. I appreciate that, Rush.

CALLER: My question to you is you were speaking earlier about Putin and Trump possibly meeting and how the liberal media is going nuts over that. The one thing I think I missed through all of this Russian collusion and everything else is why the left — politicians, the media and so forth — have chosen to demonize the Russians so much?

If I’m not mistaken, these are the same Russians that Hillary did a reset with and that Obama said he would have more flexibility with. And I’m pretty sure that when Romney was running for president, he stated that the Russians were going to be our biggest threat moving forward, and he was excoriated for that. Am I wrong on that?

RUSH: No, no. You’re absolutely right about all three examples out there, Keith.

CALLER: So my question — and I think you’re the only man who could answer this — is, why have they gone after the Russians so much? I don’t understand why they have chosen to demonize them. Everything is the Russians’ fault, from collusion to tampering with elections, the whole thing.

RUSH: Well, the short answer to the question is they want Donald Trump thrown out of office. They are trying to delegitimize his election and delegitimize his presidency. They’re doing everything they can to make him appear to be an illegitimately elected president. It’s all because they lost.

Now, Keith is right about this. But it even predates Hillary’s reset and it predates Obama being all cuddly with Dmitry Medvedev and telling Vladimir Putin to be patient, that Obama will have more flexibility getting rid of nukes after the 2012 election. If you go back all the way to the 1970’s and 80’s, the Democrat Party and the media in this country were in love with the Soviet Union!

The Democrat Party protected the Soviet Union, establishing a client base in Nicaragua. The Democrat Party sent Ted Kennedy to Moscow to negotiate with Soviet leaders asking them, be patient while Reagan is president. We’ll do our best to keep him under control, but don’t do anything drastic until we get the White House back.

The Democrat Party has been in bed with Soviet communism for as long as I’ve been alive. And I mean in bed. I don’t mean this just as a phrase. They have had a romantic soft spot for communism, because of its utopian fairness and equality and all of that rotgut that never has happened anywhere in history. 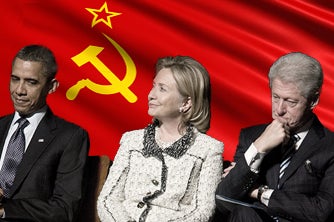 And then all of a sudden, with this election, Hillary has this big reset button, we’re all buddy-buddy with Putin, and now all of a sudden Trump wins and the Russians have become the big Satan and are working against the United States, and now we find out that they’ve been working against trying to undermine the U.S. in election after election and issue after issue. And you’re correct to notice this. It’s nothing more than a convenience for them.

Because, you see, Trump couldn’t have legitimately won. He’s too big a boob. He’s too unqualified. He’s too uncouth. He’s too barbaric. He’s too unsophisticated. Trump couldn’t have won. It just couldn’t have happened. Somebody like Trump can’t come in and outsmart the 200-year-old Washington establishment. It just can’t happen. And the Russians became the convenient foil, and this is a totally manufactured relationship that was created in opposition research for the Hillary Clinton campaign. You know the rest of the story.

But it does serve the purpose, I think, to point out just how cozy the Democrats and Obama and Hillary and Kennedys and all that before them have been with either the Soviets or Putin. In fact, the only time the media and the Democrat Party didn’t like Russia was immediately after the Berlin Wall came down and Boris Yeltsin was trying to democratize the place, remember?

They hated Yeltsin and they hated the Russians, and the Democrats were running around saying, “Freedom is not for everybody. These Russians haven’t had it in 70 years. They won’t know what to do with it. Freedom isn’t for everybody.” I can’t tell you how many Democrats and media people were running around saying that. But it’s now just a convenient way of explaining the impossible, Trump winning. And it remains, in their minds, the best bet of impeaching him and getting rid of him.