The Left’s Imploding Everywhere You Look

RUSH: Hey, folks, welcome. Great to have you back here. We are back and ready to go, another three hours of broadcast excellence. Rush Limbaugh, your guiding light, America’s Real Anchorman, America’s Truth Detector and the Doctor of Democracy — 800-282-2882.

The New York Times is in some trouble. James O’Keefe with another hidden video of an editor, their front page on the website editor proving what we already have known about the New York Times. And they even admit that they were failing until Trump got elected. Now their subscriptions are up because their subscribers need a daily dose of hate for Trump. So Trump has bailed out the failing New York Times. On their own they would be in big trouble.

Hollywood, for crying out loud, it’s now gone way beyond Weinstein. Now these Hollywood women are coming out and talking about how all of them have been abused since they were teenagers. And it’s obviously much more than just Weinstein. And there’s a bombshell story that an A-list Oscar winner is somebody along the lines of Weinstein and everybody knows who this is, but for legal reasons they’re not naming the guy. But that’s caused all kinds of speculation.

But even if that person’s not named, Hollywood is having a lousy box office. Clooney’s new movie is called Suburbicon or something, and it’s an attack on middle America. It personifies Hollywood’s attitude toward people that don’t fit into any elite category.

The NFL is imploding as well. Wait ’til you hear what the NFL supposed solution to their problem is. Let me just give you a hint. The NFL believes that they can get the players to stop protesting if they join an effort to relax sentencing guidelines for drug abusers in the hood. The NFL is hoping to buy the players off with this. Now, and this news comes before the NFL meetings that are happening today and half of tomorrow. This is an effort, and it’s a legislative effort — (interruption) What? The NFL is joining the forces trying to reform sentencing guidelines to reduce sentences for nonfelonious drug crimes in the hood, primarily. And they are hoping that this gets the players’ support, get them turned away from protesting the flag and supporing this.

Now, this is the NFL. They’re not doing anything about football. They’re now joining a left-wing legislative effort here in order to buy the players acquiescence to stop the protests. What this is, it’s an effort to reduce mandatory minimum penalties and jail time for narcotics felons and the like who, in this legislation, are referred to as nonviolent drug offenders. It has some Republican support so the league can say that they are joining conservative thought leaders in this movement. Mike Lee and Rand Paul are two Republican senators in support of the effort. Jeff Sessions has already killed this legislation when he was in the Senate. Now he’s the attorney general. It’s by no means a slam dunk.

Now, from the league standpoint, from the league’s standpoint it’s pretty clever. Under cover of conservative thought leaders, Rand Paul and Mike Lee, the NFL wants to join the players in fighting for reduced mandatory sentences for drug crimes. In the process they’ll get their social justice warrior credibility and they’ll give players a face saving way to retreat on the kneeling and the protesting the flag, and everybody gets to go back to making money.

So they buy the players off, “Look, you guys, join us in this effort to reduce these drug sentences, which are just way, way too strict and way too punitive, and we know who’s affected by these sentences. You join us in this, and we’ll lead the effort on this and you join us. We may even give you a couple a couple of Sundays to highlight this if you’ll stop kneeling during the anthem.” And the letter that the NFL sent has been signed by a player from the Seattle Seahawks, Doug Baldwin, as the league has made this position official.

I don’t think this is the only concession they’ll make to the players, but you can see where this is headed. This is headed to the league caving to the players and trying to buy them off with what they think are important social justice issues to the players in the National Football League. We’ll have more detail on this. I’m just setting the table here. CBS and NBC are imploding, and ESPN to boot. ESPN’s ratings last night, I don’t want to say all-time low, but, I mean, you have to go back many years to find ratings as poor as they were last night. I think they had a six rating. And normally Monday Night Football is in double digits.

Now, it didn’t help that one of the teams is the Indianapolis Colts, about whom literally nobody cares anymore, outside of Indianapolis, ’cause Peyton Manning isn’t there. And Andrew Luck, the star quarterback, hasn’t played since shoulder surgery 15 months ago. And there’s no sign he’s gonna start playing soon. And there’s your franchise quarterback on the bench. CBS is gonna announce their quarterly numbers, and their revenue is expected to be way, way down because of revenue loss due to ratings declines for the National Football League. NBC has similar problems.

The FBI, folks, we have learned that there was collusion between the FBI and the Obama administration and the Russians in 2009 and 2010 over this uranium deal. Real collusion! Much more collusion than whatever Russia was doing by spending a hundred thousand dollars buying ads on Facebook. This is a blockbuster story, and it comes from our old buddy John Solomon, used to be at Circa, used to be at AP, used to be at the Washington Times, now he is at TheHill.com.

This really is a bombshell, except outside of TheHill.com it’s being ignored because it totally upsets every premise behind the get-Trump investigation. While they have no evidence of any collusion by Trump with Russia or versa-vice-a, there is all kinds of evidence that the FBI has had since 2009 and 2010 and suppressed over the Clintons, Bill and Hillary and the Canadian mogul that donated to their foundation and the transfer of United States American uranium to Russia. Bill Clinton personally was enriched by thousands and thousands of dollars, as was the Clinton Foundation, the Crime Family Foundation.

And Obamacare. Obamacare is imploding. If you look across the American landscape, things the left holds dear are imploding. But you’re not seeing it reported, because the Drive-Bys would never report it even if they happened to see it.

Now we have a news story on tax reform today that poses a fascinating philosophical question for me. Paul Ryan — the office of Paul Ryan — has announced that if they get tax reform done this year, that what it’s gonna mean is essentially a $4,000-a-year increase for the average American family. Here’s the headline: “Tax Reform Will Raise Wages at Least $4,000 on Average.” Translated: That means most families, on average, will keep $4,000 of their own money instead of paying it in taxes.

So they word it here as the same thing as getting a raise, but they haven’t gotten a raise. What’s happening is the government is keeping or will keep less of their money. Now, here’s the philosophical question: As we survey America and we have tax reform over here as a piece of legislation that we seriously want to get done, does the news that you and you and you — and all Americans — on average will see an increase of $4,000 in your disposable income every year?

Does that news sway you, persuade you to support the tax reform legislation — or, on the other side: You only get this if you work? You only get this if you are working and earning money. We’re talking Santa Claus. Santa Claus is not gonna give you the four grand. You have to earn it by working, and then you’ll get a tax cut. So the philosophical question is: $4,000 is a huge amount of money in one lump to a family. It’s huge. This is why so many people arrange their income taxes so they get a refund every year because they never, other than that, see such a lump sum.

So what’s it gonna be? Work — earn a living — and keep $4,000 more of what you earn, or would you rather it come from Santa Claus and you not have to work for it? I bring it up that way ’cause the Democrats are gonna be pitching it this way. The Democrats are gonna say, “Well, yeah, but what about the people who are unemployed in the Trump economy?” And they’re gonna start ramming the economy and ripping the economy and focusing on the unemployed and how the hell are they gonna benefit from this?

You wait, and a solid American virtue like work will once again come under assault as something that is partisan and exclusionary and typical of the Republicans and they only care about people that work and they don’t care about people who can’t — not won’t, can’t — find a job. So this is why I present the philosophical question in that way. There’s also the Drive-Bys attempting something brand-new, and it started yesterday in the president’s press conference with Mitch McConnell.

They’re trying to say that the president doesn’t really care about the military because he’s not calling the families of lost soldiers and he’s not writing them letters. He said yesterday that he’s doing much better at this. He does it all the time, and Obama never did it. And that has caused the predictable explosion among the entire press corps — which is Obama Inc., Obama Must Be Defended Inc. So that’s the latest, quote, unquote, “scandal” the Drive-Bys are focusing on to try to humility and embarrass Trump. 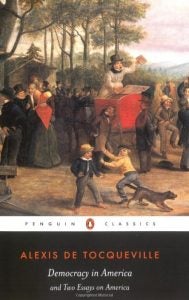 In the meantime, I have two stories here that I want to do — and they’re excellent — about how great Trump is doing and not just how great he’s doing. But what it means in terms of the country at large, and one of the stories says that what Trump is doing is recreating the America that Alexis de Tocqueville saw when he came here and wrote about what makes America unique, different, and great, that Trump is rebuilding America so that it is that great place that Tocqueville saw.

And the story provides evidence and analysis. So, folks, once again, as I sit here right now, we are loaded. I also know that when I stop talking and look at my computer, 10 different things are gonna be there that have not been known to me until now. In other words, news is being made even while I have been opening the program with another brilliant monologue. So I’ll turn to the computer — and I’m gonna have to start using discipline.

I’ve got a good program. It’s all prepared; it’s ready to go, including your phone calls. I may just shut down the computer so I don’t see anything and rely on you people in there to tell me if something really, really blockbuster happens. I’m just teasing. I don’t trust you people to tell me the right thing, either. You know, I am the editor. I am the filter. I know what’s big and what isn’t. But it all still has to be sifted through. So we take the break; we’ll come back. I’m gonna start… Because it’s enjoyable and parts of it are funny.