RUSH: Well, Comey’s opening statement tomorrow’s been released. I have it here in my formerly nicotine-stained fingers. Well, I’ve got the PDF. I’ve got excerpts. In many cases they’re recycling news. Comey admits that he told Trump he wasn’t the target. They’re all excited over there at CNN. Their tongues are on the ground over there talking about this, but there’s nothing new in it.

Comey’s gonna say that Trump said, “Look, you need to lift the cloud on this thing. I didn’t do anything. I didn’t go to Russia. I didn’t hire Russian hookers. None of this stuff happened. We gotta get this out of the way. It’s getting in the way of my agenda” and so forth. And Comey said, “Yeah, yeah, yeah, but we have to make sure the investigation is thorough so nobody questions it.” He said he understood that.

And there is a memo, apparently, that Comey wrote. He says Trump told him on a Valentine’s night dinner that he needed loyalty. There’s nothing apparently that we don’t already know or hasn’t been reported, so I don’t know that there are gonna be bombshells, at least based on what has been released.

RUSH: This is very weird. The Senate committee has released Comey’s prepared statement in advance of tomorrow. Now, why would they do this? Well, if you look at it, you might find some answers, because there aren’t any blockbusters here, at least as that I have had time to investigate. There’s nothing here that hasn’t been reported. There is — and, in fact, there’s some things here that I would consider to be exculpatory of Trump if I were one of these Democrats desperate to find something damaging. 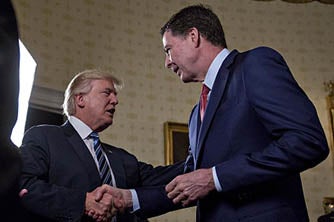 They want to believe Trump is the target, because he’s their target. Trump is the only target for the media and the Democrats on the committee. And Comey plainly says: Yep, I assured Trump that he was not the target of an investigation. That has got to be tremendously deflating for these people. They’re doing a roundtable on CNN right now, and they’re orgasmic over just the fact that they’ve got the testimony, and they’re going through it live here. They’re discovering what’s in it as they go along, and so, as they make their discoveries here, you can see little tinges of blank disappointment on faces.

There also are things here that might have some of them revved up. But brief summary here, at least as I have it. Comey says he did assure Trump he wasn’t the target. He does a lot of buildup to that. He doesn’t just flat-out say… He does flat-out say it but with a huge amount of buildup. But it’s what he says. He also said he felt the need to document that exchange with Trump in a memo. In fact, this is quite telling about James Comey. Let me read to you this excerpt from the testimony:

“I felt compelled to document my first conversation with the president-elect in a memo. To ensure accuracy, I began to type it on a laptop in an FBI vehicle outside Trump Tower the moment I walked out of the meeting. Creating written records immediately after one-on-one conversations with Mr. Trump was my practice from that point forward. This had not been my practice in the past. I spoke alone with President Obama twice in person (and never on the phone) — once in 2015 to discuss law enforcement policy issues and a second time, briefly, for him to say goodbye in late 2016. In neither of those circumstances did I memorialize the discussions.”

Now, we’ve been told that Comey memos everything. We’ve been told that Comey — as a practice as a human being — memorializes every meeting he has in a memo. Remember I said I’d love to see some of those memos of Obama. Remember my saying that? Well, Comey says (paraphrased), “I only started doing this with the president-elect. I never memo’d myself with other presidents. ” What do you want to infer from that? I can tell you how it’s gonna be inferred. “This guy is such a wacko, Comey knew he was a liar!

“He knew that Trump would get up one day and say one thing, and the next day say something else. Comey had to make sure it was memorialized to keep Trump from getting away with lying.” That’s how they’ll portray this. Comey says that Trump invited him to the Valentine’s Day dinner and that Trump said he needed loyalty. We knew that. That’s not new. Comey says he didn’t say anything or even change his expression when Trump said he wanted loyalty. What a great drama queen, Comey saying he was able to maintain his stone face.

Comey says that Trump did not bring up Flynn during the Valentine’s Day dinner but at a meeting on February 14th. Here’s what he says about that meeting: “The president then returned to the topic of Mike Flynn, saying, ‘He is a good guy and has been through a lot.’ He repeated that Flynn hadn’t done anything wrong on his calls with the Russians, but had misled the vice president. He then said, ‘I hope you can see your way clear to letting this go, to letting Flynn go. He is a good guy. I hope you can let this go.’

“I replied only that ‘he is a good guy.’ (In fact, I had a positive experience dealing with Mike Flynn when he was a colleague as Director of the Defense Intelligence Agency at the beginning of my term at FBI.) I did not say I would ‘let this go.’ The president returned briefly to the problem of leaks. I then got up and left out the door by the grandfather clock, making my way through the large group of people waiting there, including Mr. Priebus and the vice president.” Now, on the aspect of Comey saying that Trump wanted to lift the cloud, this is the “lift the cloud” memo.

“March 30 Phone Call — On the morning of March 30, the president called me at the FBI. He described the Russia investigation as ‘a cloud’ that was impairing his ability to act on behalf of the country. He said he had nothing to do with Russia, had not been involved with hookers in Russia, and had always assumed he was being recorded when in Russia.” Now, that reference to hookers, that is that phony, fake dossier that was written by a Brit that was put in that thing that BuzzFeed released that the media’s had all last summer.

There was never a shred of evidence for any of it, and they got so frustrated the media released it, BuzzFeed did. This was the one — the memo — talking about the golden showers. This was the memo where it was alleged that Trump had stayed in the same hotel suite that Michelle and Barack Obama had used in Moscow, that Trump hired a bunch of hookers to come over and urinate on if we had the bed that the Obamas had used, and that was called a golden shower.

This is in that memo that we have since learned Comey and others took seriously and actually used as a basis for the investigation. Brennan said that. He kept using the word “basis.” (impression) “This memo was very upsetting and it formed the basis of an investigation.” It was totally made up! So Trump no doubt’s exaspherated. You would be. You got this lying, phony document out there claiming that you hired prostitutes to urinate on a bed. He’s the head of the executive branch. He can say to Comey whatever he wants to say!

He says (paraphrased) “I had nothing to do with Russia; I was not involved with hookers in Russia. I had always assumed that I was being recorded in Russia.” The president asked what we could do to “lift the cloud.” Now, look, this is to me very important, because Trump knows that this is all a bunch of BS, as everybody involved knows it’s bunch of BS. This so-called dossier was a fake dossier written actually as an instructive thing for intelligence people to show Trump the kind of thing that could end up being written about him as they were trying to make the case for him that he should see them every day and have an intel consult.

In fact, when he had said I don’t need to do that every day. I’m a fast learner… This “lift the cloud” business. There’s another relevant point about this memo and the president wanting to… Oh, I’ll remember during the commercial break. Let me continue with the home here very quickly. “I responded that we were investigating the matter…” Oh. It was Brennan was… It was Brennan that said that this memo formed this dossier formed the basis of an investigation.

But it wasn’t true, and that’s what Trump says: Lift the cloud. You’re dealing with something that’s just false. It’s fake, it’s phony, had has no basis being part of a legitimate investigation. Anyway, Comey writes “I responded that we were investigating the matter as quickly as we could, and that there would be great benefit, if we didn’t find anything, to our having done the work well. He agreed, but then re-emphasized the problems this was causing him.

“Then the president asked why there had been a congressional hearing about Russia the previous week — at which I had, as the Department of Justice directed, confirmed the investigation into possible coordination between Russia and the Trump campaign. I explained the demands from the leadership of both parties in Congress for more information, and that Senator Grassley had even held up the confirmation of the deputy attorney general until we briefed him in detail on the investigation.”

RUSH: Well, CNN is saying that Comey testimony is the equivalent of the Nixon tapes. They think they’ve got Trump dead to rights now. They were just… On CNN, they are salivating. They’ve got a White House ethics czar in there claiming, “This is it! Trump’s lost the American people. The American people do not think this is political. They think Trump broke the law and they think Comey’s a very reasonable guy, and it’s over for Trump,” and CNN cannot contain themselves. They’re so excited.

One thing that I remember I was the bonus, Comey says Trump asked, “Could you get it out there that I’m not the target?” And Comey said, “Well, I’ll see what we can do.” This is like… You remember the episode where McCabe, the number two at the FBI behind Comey, is talking to Priebus, the chief of staff, and says (paraphrased exchange), “Look, Reince, we know this stuff in the media about all these… We know it’s not true. We know it’s not. Don’t worry about it.”

And Priebus says, “What good does that do? Why don’t you guys report this?” “Well, we can’t say this to the media.” So Trump’s point is, “I’m not a target of the investigation, and you won’t tell anybody this.” Now, CNN thinks they’ve got Trump obstructing. This is the equivalent of the 18-minute missing gap tapes from Nixon. That’s what they think they’ve gotten. They cannot contain themselves they’re so excited.

RUSH: So the best I’ve been able to tell in the limited time is that CNN thinks they’ve got Trump now. They think this gets Trump. “Comey would never lie, and we have to accept what he says, and it’s clear that Trump was trying to obstruct justice and…” They think Trump’s base will abandon him on this. They haven’t the slightest idea. Funny to watch.