So on Friday what we do is move myself out of the way a little bit in terms of areas of discussion. Now, what happens is that, since my interests are so broad and so varied, so omnivorous, that it’s really tough for people to call and talk about something that I don’t care about, but the opportunity is there.

President Trump is on the way to Atlanta. He is the first president since — (interruption) Yeah, I just saw this. It doesn’t mean anything. Snerdley is sending me a news alert. The news alert is that they’ve reached a stopgap funding measure for one week. In other words, a government shutdown (panting) has been averted for (panting) one week.

Just shut it down! Just shut it down and get what you want! I’m so worn out. This government shutdown as a political tactic, that the people who lose the elections continue to succeed with? What is wrong here? The people that lose elections ought to be hammered every day, and they’re not. There’s a story by the way. You won’t believe this. I wasn’t gonna get to this, the top the list, but now I’m gonna go there.

There’s a story in Politico. (laughing) Let me give you the CliffNotes version of the story. It’s in Politico and they’re very upset that Trump watches Fox & Friends first thing every morning. But do you know why? Fox & Friends is too positive. And so Trump is getting a distorted picture of what the country actually thinks of him. He starts the day thinking that he’s loved, thinking that he’s adored, because that’s where he’s loved and adored is on Fox & Friends.

And he sees all the cute little animal segments that they have and all the upbeat America’s-great segments that they do. And the people there tend to like each other and get along and there isn’t any put-down stuff going on. There’s no mean-spirited extremism.

As though Fox & Friends is the only morning show that tries that? Now, they may be only one that pulls it off because most of the other morning shows are devoted to destroying Trump or being negative. I mean, the Drive-By Media’s miserable and unhappy every day because Trump won.

RUSH: Back to Fox & Friends. Here’s Trump getting up and watching Fox & Friends. They’re very worried at Politico that he’s getting a distorted picture of America and his presidency, because they’re optimistic. They’re happy. They see the positive things during the day, these people at Fox & Friends. Steve Doocy, Kilmeade, Ainsley Earhardt. But the worst aspect of it is that Trump’s not seeing an accurate representation of the America he leads. 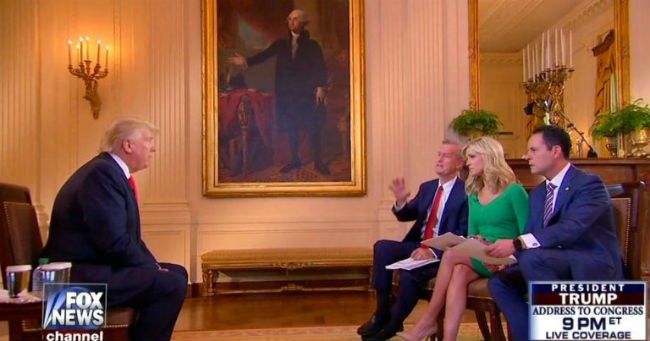 And he’s not seeing an accurate presentation of how he is thought of. And until Trump changes — until Trump ditches this show and starts watching some other morning show which is much more immersed in reality — then Trump is going to continue to be ignorant and separated from the America that he is leading. Every day, folks, I get up and I read the news. I look at the news, and every day I think that a limit has been reached where I can’t expect to find any more ludicrousness or idiocy — and every day, I surprise myself.

“It was a typical Tuesday in March, and President Donald Trump was getting hammered by the press. One of his signature campaign promises, repealing Obamacare, had just collapsed. The Republican co-chairman of the House Intelligence Committee, investigating ties between Trump associates and Russia … was under fire for a secret meeting on the White House grounds. And Gallup’s recent poll numbers showed Trump at 36% approval, a historic low for a new president.

“But Trump was starting his day, as usual, with Fox & Friends, where the world looked decidedly sunnier. Here was an ultrasound image of his ninth grandchild, in utero. His meeting with women business owners, described in glowing terms. And his enemies defanged: According to the hosts [at Fox & Friends], it was Hillary Clinton’s cronies — not Trump’s — who had the problematic Russia contacts, prompting Trump to tweet: ‘Watch @foxandfriends now on Podesta and Russia!’

“Trump’s cozy relationship with Fox & Friends has become one of the great curiosities of his unusual presidency. A well-known cable TV devotee, Trump has found inspiration for his Twitter timeline in various programs — but none so much as Fox News Channel’s 6-9 a.m. talk show. A man with access to the highest levels of the national security apparatus regularly uses [Fox & Friends] as an unimpeachable source of information… It’s not hard to understand the show’s appeal.

“While the rest of the media frets and wails over Trump’s policies and sounds the alarm over his tweets, Fox & Friends remains unrelentingly positive. It’s pitched to the frequency of the Trump base, but it also feels intentionally designed for Trump himself — a three-hour, high-definition ego fix. For a president who no longer regularly receives adulation from screaming crowds at mega rallies, Fox & Friends offers daily affirmation that he is successful and adored, that his America is winning after all.

Trump is living an illusion, because Fox & Friends is presenting one!

“Psychology suggests that the program’s particular trappings have effects on viewers that go beyond ego stroking. The fast pace, the cheerfulness and the breezy confidence are a combination tailor-made for maximum persuasion, experts say.” So Fox & Friends is a secret propaganda program! Fox & Friends is being programmed… There is an all-out, full-fledged frontal assault to destroy Fox News.

RUSH: Okay. Gotta share this quote from the Fox & Friends story that Trump’s getting a distorted view of America by watching Fox & Friends. This reporterette, by the way, at Politico? Her name is Joanna Weiss. She probably never watched this show until she was assigned to by the assignment editor at Politico. She was shocked. And I want you to listen. This is… Really, even though this is hilarious and uproariously funny, it still is a very, very wide open window into the soul and the mind-set of the American media, the American left.

She goes and talks to “Dannagal Young, a professor at the University of Delaware who studies the way people process political information.” Here’s the quote from the Delaware university professor who “studies the way people process political information.” You ready for this? “‘When we are feeling happy and people are smiling around us, it ignites a primal response that is, “Things are good! Things are great! I don’t have to be careful. I don’t have to think carefully.”‘ The show is a ticket to a kind of self-perpetuating state of complacency…”

This is actually a complaint about thinking positively. This is a complaint and a warning if you happen to be optimistic. Optimism in today’s America is akin to being blind. When you’re optimistic with Trump president and the Democrats not in power and with all of this ruckus going on — if you’re optimistic while all this is happening — then you are not thinking. You are being programmed. You don’t have to be careful. I have… I’m sure it’s happened; I just can’t recall thins. But this is a direct reference to the fact that being optimistic and positive is a mental problem. A disability. Think about that.