Farmer Tells Us About His Meeting with the President

RUSH: This is Hank in Jackson, Michigan. Hank, it says here that you were one of the farmers that sat down and had a conversation with Trump this past Tuesday. Where was the meeting? Was it at the White House?

CALLER: At the White House. Mega dittos… This is a week that I will never forget, speaking with the president on Tuesday and then having the honor to share that conversation with Mr. Limbaugh on Thursday. I don’t see how I can top that unless my granddaughter is born in August on my birthday. So thank you very much for taking my call, sir.

RUSH: I am very flattered. Thank you, sir, very much. So what’s up?

CALLER: I was on the road and I was listening to your show, and there was talk in regard to NAFTA earlier and so forth. And I had to call in regard to the position on trade, the conversation that we had with Mr. Trump. 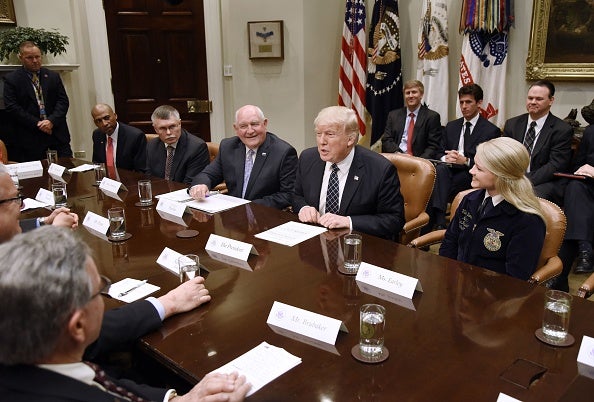 CALLER: There were 14 of us from across the United States.

RUSH: And where in the White House did you meet?

CALLER: We met in the West Wing in the Roosevelt Room.

RUSH: All right, cool. Very, very cool. So what did you gather? What’d you take away from this meeting?

CALLER: What I took away from the meeting is that the image that mainstream media and others are trying to portray of Mr. Trump, in particular in regard to rural America and agriculture, that he does not care anything about that, that is just totally opposite. He shared with us many things that reinforced my belief that not only does he care for rural America, but he wants to strengthen agriculture in America which will further strengthen and make America great again.

RUSH: Did you get the impression that was informed and up to speed and able to converse with you in ways you understood and respected?

CALLER: The fact that we were from agriculture and he is a realtor, I was completely astonished regarding his understanding on the issues that we chose to speak with him on. And one of the things that I had asked of me last night and prior to the meeting, is how good of a listener is he? And I replied in this way. The way that you determine whether someone is really listening to you is their substance to the reply on the issue or the question that is presented.

And he hit it dead on in regard to any issue or any question that was asked of him. What I did see from him is he has the ability to think and process very quickly. When he responds, he does not hesitate at all. It is rapid fire right back to you. But it is directly to the question that you posed to him.

RUSH: You walked out of there thinking the meeting was substantive and serious and not just something he did for show purposes?

CALLER: Exactly. As a matter of fact, I kind of described the meeting as — it was a good meeting — no, it was a great meeting, and even greater yet, I believe that it is going to be a productive meeting for American agriculture.

RUSH: Everybody that’s met with Trump has had your reaction, be it CEOs, be it doctors, nurses, whoever has come out of meetings with him has said pretty much what you’re saying. Not everybody’s knowledge of the listening aspect — be honest, I’ve had some people tell me — not in meetings like yours, just over the years that when they’re talking to Trump, some of them feel like he’s not really listening; he’s focused on what he’s gonna say next. I’ve had people say that. But others have said what you did about this. How did you end up being invited? We’ve got about 45 seconds. How did you end up being invited, Hank?

CALLER: That is a long process. I’m very active in the ag industry as a dairy farmer within the state, nationally as well. And I’m also active in the Michigan Republican Party, and I have to believe that between those two things there is probably why I was asked to be part of it. When I asked the person they said, “You had most of the boxes checked on what we were looking for.”

RUSH: Well, congratulations. Did you get to see any of the White House, or just the West Wing and the Roosevelt Room?

CALLER: I only saw the West Wing, but the gentleman that contacted me and did the research on me invited me over and gave me a thorough —

RUSH: There you go!

CALLER: — tour of the Eisenhower room —