RUSH: There’s another brewing controversy out there. I kind of get this one. It’s this new pair of pre-muddied jeans, $425 a pair. Nordstrom is selling jeans, $425, that are already covered in mud. They are already described as having the appearance of heavily distressed. The Barracuda straight-leg jeans are for people who want to pretend like they have been working hard, who want to pretend that they’ve been out there getting down and dirty in the mud and the dirt and in the soil and doing real menial work. 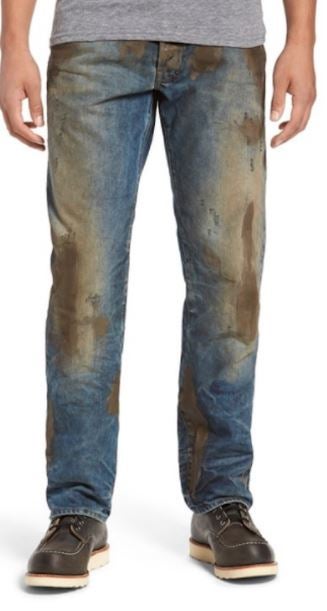 They want to show how tough guys they are and how serious they are and how unafraid of filth and stuff that they are. And a bunch of critics have surfaced and said this is exactly what’s wrong with America. People are trying to buy authenticity rather than be authentic.

Now, I have some sympathy for that argument. In fact, I was the first to advance it in my own way about my concerns over all of this social media. I have no doubt that there is an aspect of purchasing authenticity here, rather than actually buying a pair of jeans and going out there and do some work in the mud and the grit and the grime, you go out and buy a pair of jeans that makes it look like you have.

So you’re a phony. You go out and you buy stuff that makes it look like you’re something that you’re not because you know in your heart you’re not who you want to be. You’re never gonna be who you want to be. You’re nothing but a pretender. You’re nothing but a fraud. And so Nordstrom’s can help you further the fraudulent reputation by purchasing something you will never be: authentic.

Now, that, to me, is a fascinating topic just in and of itself, authenticity and the desire for it, what it is, who has it, and who doesn’t.

RUSH: We’re gonna go back and spend some more time on the Nordstrom muddy jeans. I’ve got an idea. We have car washes now. How about just go buy a regular pair of jeans, whatever they cost, and go through a mud wash instead of 500 bucks for a pair of jeans? You like it? Mud wash.