So this guy tweeted it out, and he just tried to say that Trump is so unpopular, look at how few people from the Patriots actually showed up compared to when Obama was president when everybody was there. And late that day the Patriots had to put out a tweet to put everything in context, and the Patriots tweeted: Well, the big difference here is in the picture with all the people you see, they’re standing there on the steps, the players are on the risers, and the players, the staff, the football staff, the coaches, the front office people, they’re all on the steps. In the Trump picture, those people were seated in the audience and not pictured at all. And in fact it’s roughly the same number of people that came with us, the Patriots, to the White House this year as the last time we were here when Obama was president. 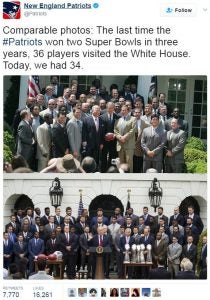 So the New York Times, without trying to figure out if there is a legitimate difference, just ran the two pictures with the story that the Patriots so deist Trump, so many detest Trump, look at how few of them actually showed up. Well, now, that sports editor Jason Stallman has actually done a 180.

He said: “Bad tweet by me, terrible tweet. I wish I could say it’s complicated, but no, this one’s pretty straightforward. I’m an idiot. It was my idea. It was my execution. It was my blunder. I made a decision in about four minutes. It clearly warranted much more time and once we learned more we tried to fix everything as much as possible, as swiftly as possible, and as transparently as possible. Of course, at that point the damage was done. I just needed to own it.”

Now, this is the kind of thing that ought to provide an object lesson to everybody consuming news and the Drive-By Media. This was just, you know, a photo trick. Think of the other tricks that are employed daily just in straight news reporting.