RUSH: The secretary of Homeland Security is a man named John Kelly, and he had words yesterday. He challenged members of Congress who are critical of the Trump administration’s aggressive approach to immigration enforcement. ICE, under the direction of Secretary Kelly, is really stepping it up. They are deporting; they are rounding up. Jeff Sessions has gone to the wall and said, “This border is closed. You are not welcome here. It is not open.” It’s unlike anything we see. And all it is is enforcement of existing law. That is the only thing that’s happening.

The only thing different from eight years of Obama and, in fact, different from some years from Bush, is that existing law is being enforced. That’s all it is. You would think that we have a bunch of power mad people in the Trump administration implementing their own law and just randomly choosing to pick people to kick out of the country and not let ’em in. That’s what Kelly was saying to Congress.

He is a retired Marine general. He “defended the work of Homeland Security employees from immigration agents to airport security officers, saying they are unjustifiably maligned by critics as they enforce laws intended to keep America safe. He described Homeland Security staff as ‘political pawns’ in his speech at George Washington University.”

And then he lowered the boom. “Kelly said the public and public officials should err on the side of assuming that the agency’s employees are acting within the law. And for members of Congress who don’t like the laws, Kelly said they ‘should have the courage and skill to change the laws,'” or shut up. If you’re not gonna change the law, shut up and stop undermining what we’re doing. If you don’t like what we’re doing, change the law, you weasels. He didn’t say weasels; I threw it in there. 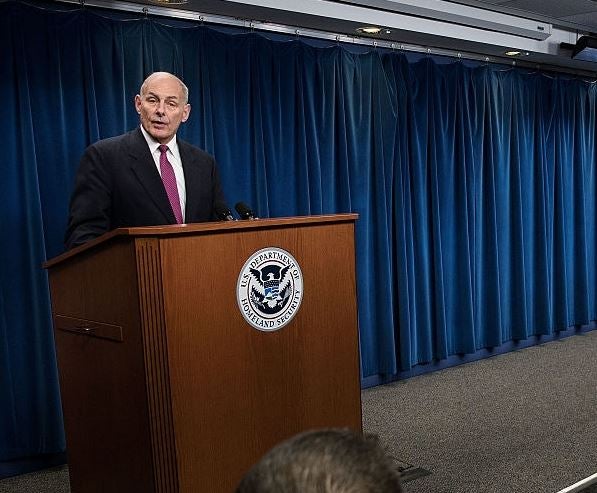 But that is his point: My agents are out there on the front lines. They are finally enforcing the law, under the direction of the president, the attorney general, we are enforcing the law on immigration. There’s nothing new out there. If you don’t like it, change the law.

This is what has been missing all of these years, sanctuary cities being allowed to get away with violating the law, federal law not being enforced. In Arizona, the governor there, Jan Brewer, implementing Arizona law that is a copy of federal immigration laws. And the Obama administration filing suit against them, claiming (paraphrasing), “You can’t do this in Arizona because immigration is a national, it’s a federal responsibility.”

And the governor said, “But you’re not enforcing the law, we’re being overrun here.” And Obama said, “It’s not your problem, get out of the way, you can’t do this.” And a court upheld for Obama. So they are enforcing the law. That’s all that’s happening here. And Kelly told them to shut up and deal with it or change the law if they don’t like it.