RUSH: Joe in Festus, Missouri, great to have you here. Glad you called. How you doing, sir?

CALLER: Liberal greetings from a graduate of Mark Scully University of Cape Girardeau, and I’m a Vietnam veteran. I wanted to weigh in on what happened with this so-called victory for the Democrats last night.

CALLER: I’m not impressed by it at all. And the reason is I started checking where this money was coming from for him. First thing I noticed was the Caliber charter schools. The biggest mistake made by Democrats, specifically Obama, in the last eight years was when he brought in Bill Gates and Arne Duncan and trashed public education by starting this privatization. Now, DeVos is pretty much a mess, but at least people recognize that. They thought Bill Gates, well, he must know everything. And so that’s my viewpoint as a liberal from Missouri —

RUSH: I need to ask you to clarify something. You think that charter schools are bad and that Obama signing on to them with Bill Gates and Arne Duncan, it angered Democrats like a sellout of public education, the teachers unions? What was bad about it?

CALLER: The nasty secret to the billionaires is that our teachers in the classrooms are very good people that are doing a good job for the most part —

RUSH: In the public schools?

RUSH: You mean in the public schools? 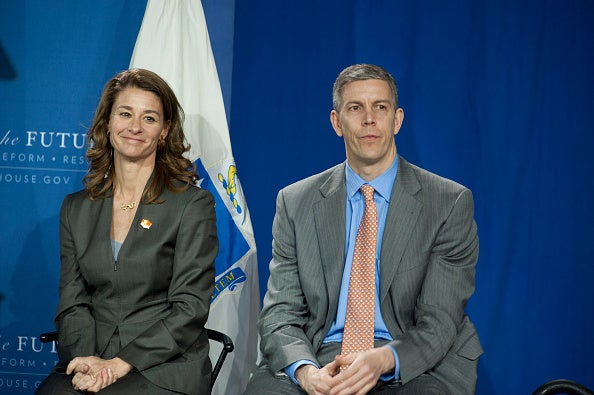 CALLER: — a source usually for Democrats, not completely of course, but usually for Democrats, teachers are a source of energy and organization and, you know, getting out the — raising the vote totals. Instead of 62% or 59% turnout, you get a larger turnout, and they stand for things that help families. And so I think that was the biggest mistake, bringing in Arne Duncan and Bill Gates. The charter schools are bad for two reasons. One, the good ones — and there are some good ones — do a lot of cherry-picking and don’t carry their fair share of the more difficult students. A lot of them are just —

CALLER: — very bad schools that are dumping grounds that —

CALLER: — you know, use Teach for America and very —

RUSH: I hear you.

CALLER: — not experienced teachers that are likely to not cost ’em much and be gone within two or three years —

RUSH: So when they invest in the charter schools, both financially and ideologically they’re selling out the public schools and all the get-out-the-vote efforts that teachers engage in, they’re underselling the teachers and this kind of thing. And you think that had a lasting effect in this election last night?

CALLER: Oh, I think it’s been the most dominant thing, mistake that the Democrats made in the last eight years —

RUSH: Are you a teacher?

CALLER: I thank you and you’re a guy that made the point about how much we’ve lost in legislatures. They don’t just affect national elections. You know, these charter schools are buying people every which way.

RUSH: Wow, that’s just a fascinating theory. I wish I’d a had a chance to get to your call sooner today. ‘Cause you’re the first guy I have ever heard say that the Democrats’ root problem here, or one of them, is the sellout of public education in favor of charter schools by bringing in Bill Gates, who I thought was into mosquito nets, and Arne Duncan. Well, look, I appreciate the call. Joe, think about giving Mr. Snerdley your number and maybe on an Open Line Friday I’ll call you back when I have more time. Because I’m really curious about it. Uou sound serious, and I’d like to drill down deeper and unpack this a little bit more with you, if you ever have the time and chance. Thanks for the call.