Liberals Want the President to Fail

RUSH: George in Dartmouth, Massachusetts, you’re next. Great to have you here. How you doing?

CALLER: Well, Operation Chaos dittos, Rush, and I’ll just tell you, I’m gonna make the host look good, right, because that’s our job as callers. So if you remember when Obama won in 2008, you wanted Obama to fail. Not Obama, but his policies.

CALLER: And the media ripped into you —

CALLER: Absolutely. So now what’s the mainstream media doing in all the higher education at college? They want Trump to fail, except they’re putting more action into it, i.e., you know, I think advocating some of these rallies, some of the folks that go — you know, the college campuses and the riots and the fires and all that other stuff, they’re actually going a step further. But yet it was okay to blame you, right? But now they’re even going further with polls to try to affect the Trumpster that voted for him, which I think is sort of your Operation Chaos in reverse. So they’re taking your playbook year after year, but yet you get chastised, but it’s okay for them. 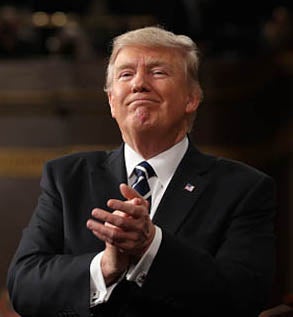 RUSH: Well, which I have explained before and I’m gonna do it again today. For example, when their authority figure wins, you must bow down to it, no matter who you are. Because the only authority they acknowledge is themselves, and in the case you’re talking about, it was Obama. The authority’s not the Constitution. The authority is not American law. The authority is whoever is leading the progressive movement. By definition, whoever wins the presidency as a community organizer is gonna be the leader of the progressive movement, so all authority was vested in him.

Here I came two weeks before, one week before he was inaugurated, saying, “I hope he fails.” I was committing an unpardonable sin. So they had to go out and trash me as anti-American, anti-constitution. “It’s never heard of. We’ve never seen somebody hoping that a newly elected president fails. We should all get behind our newly elected president because we all want the country to succeed.” That was the refrain. Now we fast forward to 2016, and the Trumpster wins. And all of that is mysteriously thrown out. And now there is no unifying behind the president for the good of the country.

Now the left is demanding that not only Trump fail, that he be gotten rid of and replaced by someone that is from their side of the aisle, ideally. They don’t respect the authority of the American presidential election, because it didn’t go their way. And so they are perfectly fine in their own mind with trying to destroy Trump, because their authority is not the election result. Their authority is not the Constitution. Their authority is progressive leadership, progressive ideals, progressive policy. And it was defeated. Well, that’s unacceptable. We simply do not accept that we lost the election. And so we must overturn it. We must either paralyze the president or overturn his presidency. And that’s what’s going on.

So for them it is heroic to destroy Trump. It’s not about doing what’s best for America. It never is with these people. It’s about doing what they demand. It is about their authority being the only authority, and their authority dominating. And so there is, in their minds, there’s no hypocrisy here. I was not respecting the lone authority of progressivism. I was respecting the authority of the Constitution, ’cause I feared Obama was going to stealthfully undermine it. I was right. They want to be able to totally ignore it at all times.