RUSH: Okay. So the Norks launched a missile on Saturday that blew up the moment it left the pad. The rumor going around is that we cyber hacked the North Korean launch system, their computer system, and guess what? The Drive-Bys are not wasting any time in crediting the Obama administration for the high-tech hackery that the Trump administration was able to use.

So eager have the Drive-Bys been, I probably should have figured this, but look at all the months that have gone by here. We’re coming up on a hundred days and the Drive-Bys just jumped on this. And it demonstrates how eager they have been to try to credit Obama for anything that is happening. But the problem with that is they’re bashing everything that Trump does. Therefore, there’s nothing to credit Obama for, except this, which is a stretch.

On Friday, here’s what happened. The ChiComs, who’ve done a 180 on the Norks, it appears, at least temporarily, the ChiComs told the Norks not to do another nuke test. By the way, apparently the world was shocked when this potbellied little dictator over there, Kim Jong-un — this is the strangest little country. The military in that country literally think of the leader as a deity. They start crying when they see the guy.

Now, maybe they’re crying because they know they’re gonna be sent to their death, I don’t know. But they start crying when they see the guy. Have you seen that haircut? We’re not supposed to comment on people’s appearance, but come on, who knowingly styles their hair that way? It’s not like this guy has to wear a helmet and worried about helmet hair. One of the goofiest looking tyrants that you’ve ever seen. The guy doesn’t look scary, he looks — well, whatever. That’s as far as I’ll go. Probably in the era of political correctness I’ve gone farther than I should have.

Anyway, the little potbellied dictator is standing there reviewing the latest Nork military weapons in the parade. Have you seen those military people goose-stepping like that? They even they have women, they have women in combat in North Korea and they were goose-stepping too which meant they had to be wearing dresses when they did it. It’s the strangest looking thing. You know what it reminded me of? You remember the last time the Olympics were in China? It was the summer Olympics when Phelps was making like a fish and breaking every water record there was.

And the opening ceremony, do you remember the opening ceremony? You never forget it, right? The Drive-Bys referred to it as some of the most beautiful pageantry we’ve ever, ever seen. There he is. Look at Fox right now, there’s the little potbellied tinhorn. He’s gone there. He was pointing out something about weapons to some military people. I really can’t believe everybody’s getting in a fever pitch about this guy but they are because he does have nukes. 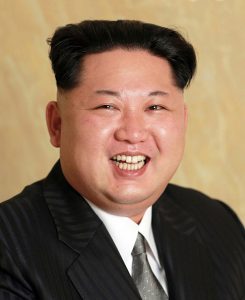 At any rate, the pageantry of the Olympic opening ceremony and the Drive-Bys were ecstatic and impressed because China, of course if you’re Thomas L. Friedman of the New York Times, China is the way to go. The Chinese have an elite group of people, 10 or 12, 20, whatever, and they run everything, the smartest people. They don’t leave it up to anything in the private sector. The elites run everything, and that’s what we ought to do. And the pageantry, the beauty, the choreography.

And all of that was true, but you know what I saw? I saw sameness. I saw every person looking exactly like every other person, behaving like every other person. And it was on display exactly what happens to the individual in a socialist or communist system. We see this in the Norks military parade. All of those people goose-stepping around in perfect timing and choreography.

At any rate, they’re all walking by, they’re goose-stepping by, and then some trailers carrying the latest missiles go by, and apparently intelligence people all over the world were shocked by what they saw. They saw what looked like a North Korean ICBM, an intercontinental ballistic missile that could travel 7,000 miles.

Stop and think, 7,000 miles in an airplane is gonna take you, jeez, 23 hours. I know we have these, but that the Norks do. The Norks can’t aim what they’ve got now, so if they ever would fire one, you know, it’s a crapshoot where it’s gonna end up. And that’s a problem, 7,000 miles. It’s no wonder the people of that country are starving.

Anyway, they could tell this just by looking at it, so it changed a little bit, at least according to the news that we’re supposed to consume. Sometimes I think this news is made up in order to portray a new enemy as a real threat, that we’ve got to get serious about. Of course, the Norks are not a new threat, and nobody’s been able to do anything about them. And, by the way, nobody has ever forced the ChiComs to turn on ’em. Nobody before Donald Trump. Now, that’s not supposed to happen. That is not supposed to compute.

The ChiComs were supposed to make mincemeat of Trump. And it turns out that the Norks are losing patronage from the ChiComs because the ChiComs told the Norks not to do another nuke test, and the Norks didn’t. They didn’t do another nuke test, as they had promised. Instead, they launched one of their medium range, a new medium range ballistic missile in celebration of this gigantic parade the little potbellied dictator presided over. And that’s the missile that blew up within seconds of launching.

The rumor is it blew up because it was hacked by U.S. cyber experts, and, of course, the Drive-By Media is claiming that Obama and his administration developed the wherewithal to make the hackery possible. Now, here’s the thing. Eighty-eight percent — I don’t want to be a Debbie downer here, folks, but 88% of Nork missile launches have failed. But if you’re Obama looking for something, why not take credit for it? So they did.

Now Mike Pence is on DMZ, he’s in South Korea and making no bones about what the Norks face if they continue with this, and the difference in the equation is the ChiComs. The ChiComs are indeed using leverage over the Norks to get this curtailed. For whatever reason the ChiComs do not want any more provocation from the North Koreans upsetting whatever is going on between the the ChiComs and the United States.

Here, grab audio sound bite number two. This is CNN today. We have a montage. Actually, it’s not just CNN. It’s people at the Fox Business Network and others trying to give Obama credit for hacking the Nork missile.

POPPY HARLOW: The Obama administration accelerated this secret program to sabotage these missile launches, including electronic warfare or hacking.

ASHLEY WEBSTER: President Obama back in 2014 said that he would use cyber-attack as a way of trying to undermine North Korea’s missile program.

JOHN BERMAN: Is this failed missile launch perhaps an example of efforts started inside the Obama administration?

RUSH: Is it not transparent or not? If the Obama administration perfected all this back in 2014, why has it not been used until now when Trump sits in the Oval Office? In fact, Trump was at the White House Easter egg — doing the Easter egg roll today. It’s cute. I’ve seen some of the footage of the Easter egg roll. It’s a fun day for the little kids that get to show up and so forth. But Trump was asked if he had a message for North Korea. And it was two words: “Gotta behave.” (laughing) “Gotta behave.” Just love the guy, gets down, gets it, gets out.

“CNN’s Fareed Zakaria: Were Obama Still President, He Would Have Ordered ‘Similar If Not Identical’ Strike In Syria.”

Really? So I read further here. “CNN’s Fareed Zakaria discusses his experience with ‘Trump derangement syndrome,’ where people’s hatred and anger towards the president is so intense –” Oh, that is right, Fareed Zakaria’s come out against people who won’t get over Trump, won’t get past Trump. You know why? Because Fareed Zakaria agrees with the strike on Syria. He thinks it should have happened and he thinks people opposing it just because they oppose Trump is dangerous.

RUSH: By the way, I checked. During the eight years of the Obama regime, the North Koreans had eight missile launches, missile tests. If Obama had developed this wonderful hackery and his administration had seen to it that this degree of computer cyber attack had been developed, why didn’t he use it on any of those eight? Now, giving him the benefit of the doubt, supposedly the cyber hackery tech was not perfected until 2014, and of course Obama’s last year in office was 2016, so I don’t know how many Nork missile launches there were then.

But the point is all these missile launches while Obama’s president, nothing happens to ’em. They launch a missile during the Trump administration, and were able theoretically — that’s the story, anyway — to blow it up literally seconds after it left its launching pad, and there’s Obama’s media out there claiming, “Obama did it! Obama did it!” And now Fareed Zakaria is out there saying that a couple of Obama people told him that if Obama was still president he would have done the same thing in Syria that Trump did. What is this? It sounds like somebody’s feeling really insecure out there. And if it’s not Obama, his supporters are.

In normal circumstances what you would have, Obama would be ridiculing what Trump did to support Obama’s strategy of draw red lines and don’t do anything. Normally you would have Obama, if he was consistent, he’d have people out there suggesting this is warmongering, it’s needless intervention, this is not what our successful policy of the last eight years has been engaged in. Instead we get piggybackery. We get Obama (imitating Obama), “Hey, hey, hey, I would have done it! I would have done the same thing Trump did. I could have done it if I were still there. I would have done it!” Just like Bart Simpson coming along. Same thing on the nuclear missiles.