RUSH: Oh, and there’s even more out on this book about Hillary campaign and what an absolute witch this woman was, or I should say is, but what a witch she was to the people that worked for her. You know, it’s everything that we’ve always suspected about the Clintons. 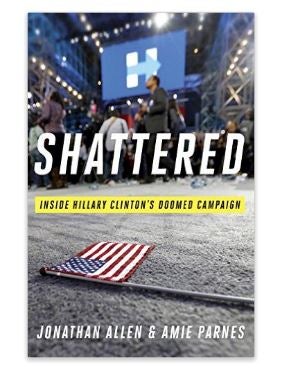 You get a book on a campaign following an election written by journalists who knew all this stuff during the campaign but held it for their book but knew it all along. So all the while Hillary’s campaign is known to be a clunker, while all along, while she is known to be a bad actor, all along known that Trump’s campaign is real and these rallies are substantive and he’s got all of the energy. And his campaign has all the excitement. They knew all of that, and they knew she was cruising for trouble, but they maintained the myth that she was still headed for a landslide win because she was Hillary Clinton, smartest woman in the world.

They knew that there was open revolt in her campaign, that she was just downright mean and disrespectful and off-putting to people that worked with her. We’ve always heard about the Clintons that they behave, particularly Hillary, as above-everyone-type of royalty where you’re not even allowed to look at her, much less speak to her. You must go through an intermediary. We’ve always heard this about her.

This book lends some credence to that.