RUSH: This is Charles up next in McLean, Virginia. Welcome to Open Line Friday, Charles. How are you?

CALLER: Good spirits, Rush, longtime listener, since 1995. First-time caller. An honor to speak to you. I’m here to say that a lot of America’s problems would go away if President Trump made a speech in which he promises to collapse the cost of converting saltwater to freshwater, a process known as water desalination. If he promised to do that in just seven years, say, farming any desert on the planet would become economic. As a result, in time the deserts would turn green and the size of habitable earth would double.

RUSH: Hang on here just a second. This is a fascinating premise, but the desalinization of saltwater, you know, this is now done by nuclear reactor on our nuclear subs.

RUSH: Submarines cannot carry enough bottled water so they have to be able to desalinate the ocean in order to provide drinkable water —

RUSH: — for the sailors.

RUSH: It is massively expensive.

RUSH: The Saudis have couple desalinization centers for the royal family, well, and the citizens, because there’s no rain, there’s no water there. They have to desalinate.

RUSH: But it requires incredible amounts of energy to do it, and it is expensive as hell. Now, your theory is if we could bring the cost down — 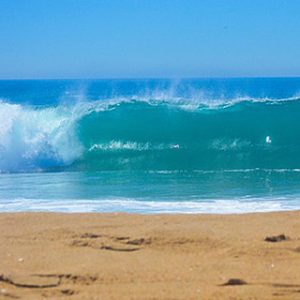 RUSH: — you could turn the oceans into a source of freshwater, and therefore there would never be a drought anywhere and you could market the water in the ocean and sell it and create a brand-new economy with it?

CALLER: Correct. And the reason is, well, the cost of desalination is roughly a third energy, a third capital costs, a third maintenance costs. What’s happened, that nobody has noticed in the last 10 years, is that literally a miracle has happened in Israel. They had a drought starting in about 2000. They responded to the drought by collapsing the cost of desalination from $2,000 an acre-foot to $500 an acre-foot. They send the water first to their cities, and then they clean it up a little bit —

RUSH: Right. Look, I’m 20 seconds from running out of time. Since you bring up the Middle East, the problem there is that the Palestinians are not gonna believe it. They’re gonna believe that the Israelis have poisoned it, ’cause the problems there go beyond water. I understand your thinking on this. It would be great if freshwater could solve that problem, but I don’t —

RUSH: If you ever get a chance to taste desalinated water, you’d be surprised how good it is. It tastes just like rainwater, like distilled water. Better than distilled water. I was stunned when I first had a glass of it.