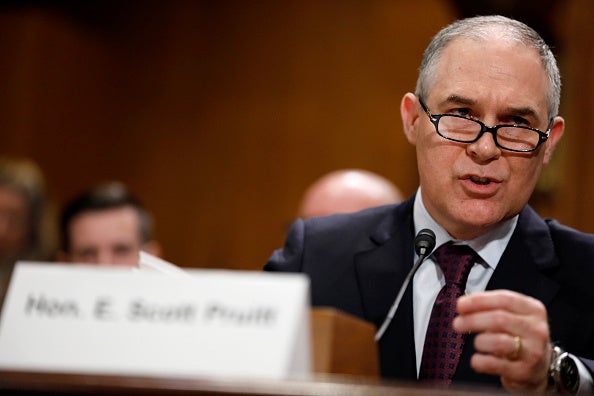 Now back to the EPA. Try this headline. This is from the Washington Examiner: “Pruitt Ends EPA Gym Memberships — Environmental Protection Agency Administrator Scott Pruitt said Thursday that the days of gym memberships being paid for by the American taxpayer are over. Pruitt was on Fox & Friends, where he was asked about documents released Wednesday that show EPA employees spent more than $15,000 on gym memberships outside of the free services they were already being given.”

I guess they have the EPA gym, the workout area, but some of them wanted to go bigger than that, and so they did, and they charged it off to the American taxpayer. And this guy says those days are over. You’re already provided gym membership and service here at the EPA, and you’re not gonna go out and get supplemental and have it paid for. And they’re livid and outraged in the deep state at the EPA.

You want to know how sick and perverted they’re making our college students? This is from Heat Street: “College Students Are Taking Short, Cold Showers to Prevent Climate Change — An offshoot of Indiana University’s student government is urging students to take short, cold showers to save the planet. ‘Living sustainably is one of the easiest things you can do,’ the head of the student association’s newly founded sustainability department told the student newspaper. ‘Turn off your lights, unplug your electric devices, take shorter, cold showers. Maybe some people are deterred by that, but as time progresses these issues are going to become much more pressing and much more internationally important.'”

These kids don’t realize that this stuff has been going on for decades. How many times over the course of our lives have we been told — look what they did to the toilet from six gallons to 1.5, just have to flush it three or four times, depending on who you are, and then you have all of these recommendations, don’t take long showers, take cold, there’s nothing new here. And while some fanatics have already implemented stupid things like this, shorter cold-water showers, the complaints of climate change have not abated.

But that’s beyond the point. The point is that for 30 or 40 years people have already begun to behave in these ways and drive these so-called clean energy cars. And all during that period of time, the global warming activists continue to tell us that climate change is getting worse. In other words, none of the efforts that anybody have made to reduce carbon footprints is ever given any credit. Nothing anybody has done or is doing is ever credited as helping.

At some point, after 30 years of following all these silly guidelines, you would expect there to be a noticeable reduction in the warming of the planet. Well, there has been that. Does it strike you strange that the global warming crowd, with all of these mandates and all these behavioral tips, doesn’t want to take credit for it? They don’t want to take credit for the fact the planet hasn’t warmed in 15 years? They’re looking for excuses to explain it, rather than take credit for it. If they were smart they’d be taking credit for the temperature not having increased and then saying, “See? We need to do more of what we have been suggesting.” Thank God they’re not that smart.

RUSH: You know, I don’t know about the earth’s environment, whether it’s sustainable or not, but I’ll tell you what is sustainable, and that’s stupidity. We’re doing the greatest job of sustaining stupidity in this country. It’s as though we’re trying to. “I’m not gonna take any more hot showers because I’m trying to save the planet.” You kids, when you move back home with your parents when you graduate college, keep using the cold water. Your parents will be happy that you’re saving them some money. But that’s about all you’ll be doing.