RUSH: I have been struck by something.

You know, after the 59 Tomahawks were launched into Syria, there were a bunch of Trumpists, famous Trumpists who were not happy. They began tweeting immediately: “Trump said he would never do this. This is not America first. This is not putting America first. This is not making America great again. Trump said he wouldn’t be doing these kinds of military interventions anymore.” So I began to think, is that true? Did Trump campaign frequently, reliably promising there would not be any U.S. military intervention abroad? That’s another question I must put to you Trumpists.

I realize a lot of people interpreted that that is what Trump meant when he said, “Put America first,” and he was talking about NATO. With NATO he never said NATO had to go away. He just said the people running it are not paying their fair share, and we’re not gonna continue to pay way beyond our share here. We’re not gonna bear the burden. If NATO’s gonna mean anything, these people gotta play ball.

By the same token, I was trying to remember last night — I Googled it, looked around — I couldn’t find it, as in white paper policy positions, Trump claiming consistently and often, that there would never be any military intervention around the world. But, boy, did people think that’s what he meant. There was a lot of interpretation. Putting America first, making America first, making America great, America only, no more wars in the Middle East.

Like Pat Buchanan definitely thought that’s what Trump meant. Pat’s not happy. Pat wasn’t happy when he heard the first of 59 Tomahawks got launched. He thought those days were over. And a lot of prominent Trumpists thought those days were over and thought that’s what Trump was. He’s attacking trade deals. He’s attacking TPP NAFTA and all this and criticizing Obama for his half-baked military maneuvers around the world. But actually assuring or promising people that the days of the United States intervening around the world were over, I don’t think I remember that as a staple of the campaign.

Mr. Snerdley, do you remember that as a staple of Trump’s campaign? When you think about Trump and the campaign and you apply what you remember from the campaign to the way he is governing, does that — like you informed me earlier he’s consistent as he could be on immigration. Not waffling on that at all. Not waffling on bringing jobs home, American economic upward mobility, all this stuff, fixing health care.

By the way, Mark Meadows is saying they may have a replacement bill before the recess on health care.

RUSH: Well, here’s another one where the very public Trumpists who think that the president was going to herald a new era of isolationism, which I guess that’s what they thought Trump was. They thought he was an isolationist: Make America great again and only make America. We’re not gonna make anybody else great again. They’re on their own. We’re gonna make ourselves great, gonna do whatever it takes to make ourselves great, and that’s it. 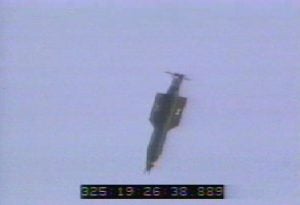 Well, the United States has just dropped the largest nonnuclear weapon in our arsenal on an ISIS tunnel in Afghanistan. Again, the largest nonnuclear bomb in our arsenal has for the first time been deployed. It’s been dropped. It’s been used on an ISIS tunnel in Afghanistan. The bomb was dropped in the Nangarhar Province, the Pentagon has confirmed. The blast radius believed to be over 300 meters, a football field, essentially. [sic]

So there will be a lot of people here who are going to be very, very much concerned about this. But I ask you to think back to the campaign, what did Donald Trump say about ISIS? He said we’re gonna take ’em out. We’ve had a bunch of pansies and wussies that haven’t had a serious moment about it. I’m gonna get together with my military people, we’re gonna come up with a plan, we’re gonna wipe ’em out. It’s only because we got a bunch of stupid leaders that we haven’t wiped ’em out yet. So here comes the biggest bomb, nonnuclear bomb, dropped in Afghanistan on an ISIS location.

RUSH: Yeah. I misspoke. Three hundred meters is roughly three football fields, 300 meters is very close to 300 yards. The primary blast range of this powerful bomb. Anyway, folks, hang in there, be tough, sit tight, because we just get warmed up here.

RUSH: Eight years of passivity under Barack Hussein O. This is what American strength looks like with messages to both enemies and allies that we haven’t been sending in many, many moons.

RUSH: Ben in Gaithersburg, Maryland, you’re next. Welcome, great to have you. Hi.

CALLER: Thanks, Rush. To answer your question from the top of the show, I can tell you with 100 percent accuracy, ’cause I watched over a hundred Trump rallies, that he never once promised that he would not use military force. All he said time and time again was that our military has become run down and very weak compared to the past, and he was gonna build it back up to where it’s very strong and —

CALLER: — we would never have to use it. 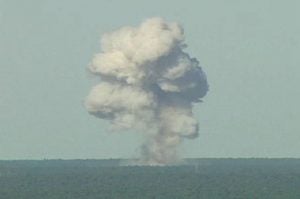 CALLER: Hopefully we would never have to use it. He never promised not to use it.

CALLER: Oh, absolutely. Yeah, he did say he was gonna bomb the S out of ISIS and apparently he did that today as well. But he never said he wasn’t going — in fact, showing peace through strength was his point.

CALLER: — base and now that has become the dominant story in the news the last two days was that he’s changing all his campaign positions because they desperately need to pivot from the Trump collusion story that blew up in their face.

RUSH: Yeah. Okay. But they haven’t given up on that. I mean, that goes dormant like the United Airlines story covered it a bit and now dropping this bomb has covered it. But the conspiracy theories that the left comes up with to explain what Trump’s doing to take the collusion story off the front page, these people are in a funnel. I mean, they’re hilariously insane and getting better, or worse.