Trump and Tillerson Are Resetting the Russia Relationship for Real

RUSH: All right. I’m gonna give you another example of exactly what I’m talking about. The past, well, include today, the past day and a half, you know, when Tillerson arrived yesterday in Moscow, secretary of state, Rex Tillerson shows up in his little Boeing 737, so tiny I had to make note of it yesterday, what was the news? The news was that Putin was not gonna meet with him. That Putin was gonna stiff Tillerson. That Tillerson was gonna have to meet with some underling like the Russian ambassador of a foreign secretary or whatever it was.

The media, “Oh, man, this is great! Putin doesn’t like Trump! Wait, we don’t like that, do we? Okay, Putin’s gonna embarrass Trump. We like that. We like that.” So they report that Putin isn’t gonna meet with Tillerson. Right, Tillerson is gonna take a little Boeing 737 and land in Moscow to be stood up? You don’t go if you’re gonna be stood up. At this level, you don’t go. You don’t land. You don’t go there and speak to an underling. I knew it was never true that Putin wasn’t gonna speak to Tillerson.

I also knew that Putin and Tillerson were gonna speak and it was gonna be reported as a productive and good meeting, because I also know that what Trump is doing is an actual reset with the Russians right now, and the hit of Assad in Syria is part of it. And this is not a Hillary Clinton reset with a plastic little red button meant to be symbolic. This is a genuine reset and establishment of who the big dog is in this relationship, and it’s us. 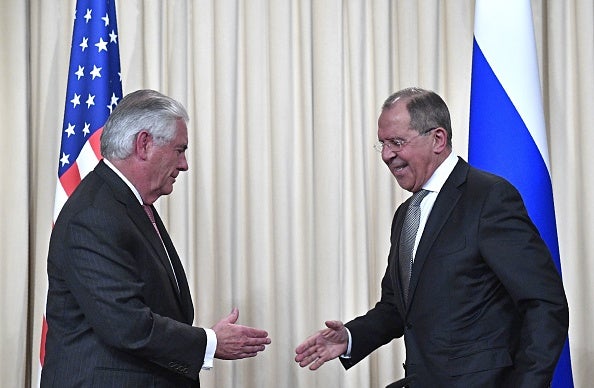 The days of us kowtowing like Obama did are over. All you have to do is listen to Trump. It’s not hard. Just accept that he means what he says. It’s hard because in politics you normally don’t do that, you don’t believe what they say. So now Tillerson and Lavrov are having their joint news conference, and the media’s beside itself, “Oh, my God, they had a two-hour meeting, wow, and everybody is saying it was productive.” Of course it was gonna be. There wouldn’t have been a landing if Tillerson wasn’t gonna meet with him.

This is Statecraft 101. If you’re gonna go to Russia and the head honcho’s gonna stiff you and is saying so and you believe it, you don’t land. You cancel the meeting, you pull out, you don’t go there and get stood up. And look at our media, thinking that we would do that. They’re so conditioned to Obama and the way he behaved, and they’re so conditioned to thinking the world hates America like — well, that it would be totally understandable for Putin to hate Trump and not want any part of Trump, want to show Trump up, want to let Trump know who the big dog is. And they fell for it hook, line, and sinker.

RUSH: So at the Tillerson-Russian guy press conference, Andrea Mitchell blurts out a question when they sit down, and the Russian guy says, “Who brought you up? Who taught you your manners? That’s very rude! Sit down.” Andrea Mitchell, put in her place by a communist.