Rex Tillerson Was Born to Be Secretary of State

RUSH: This is Rex Tillerson, secretary of state. Man, is this guy — I told you, when they chose Tillerson for secretary of state, I just want to remind you, I was all-in from day one. The guy looks like he’s right out of central casting. He sounds right out of central casting. He looks made for the part. He looks like he was born to it. The guy comes from the oil industry, and that means he’s had dealings with everybody around the world that’s also in the oil industry, and that would include Russia. 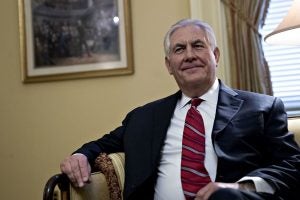 How much sense does that make, an oil industry executive trying to destroy the planet? Like Republicans want dirty water, dirty air, want your kids to die, being poisoned. May as well give them peanut butter if they have an allergy. Some of the most ridiculous, absurd claims. And do you remember shortly after Tillerson was named secretary of state, the media tried to hang the fact that Tillerson had done deals with Putin and that Tillerson and Putin were big friends, and they’d worked together before.

And they wanted to hang around Tillerson’s neck all kinds of things because he was gonna end up being nothing more than a Putin puppet because he’d worked with Putin at Exxon, and Exxon had to get permission, had to work, had to give Putin deals that he wanted in order for Exxon to function in areas that Putin and Russia controlled.

You know, what was really going on was that the Russians were trying to commandeer, steal any which way they could get ExxonMobil drilling technology so that they can penetrate the Siberian permafrost. There’s a lot of oil under there. Exxon knows how to go get oil where it is. The Russians don’t. And Putin has always been trying to make deals with Tillerson. But the point was that Tillerson was just outclassed by somebody like Putin, just gonna be giving things away. This made no sense.

And it fed into this crazy story that there was collusion between Trump and Russia to steal the election from Hillary and Putin was just a part of that. Well, in Luca, Italy — by the way, this is why Tillerson arrived to Moscow on a 737. Now, it said United States gov of America. It was a government jet. But the Forest Service guys fly around on one of those. I can’t believe the secretary of state — but it was a short hop. They showed Tillerson’s plane landing, but before he departed Italy, Luca, the G7 summit, Tillerson spoke about U.S. relations with Russia and this is 12 seconds of what he said.

TILLERSON: Russia has really aligned itself with the Assad regime, the Iranians, and Hezbollah. Is that a long term alliance that serves Russia’s interests?

RUSH: Now, we are going to, in a minute, contrast this with Obama and his relationship with Russia, because if you want to know — folks, you know what we know now and what we’ve always known? That the real collusion with Russia was Barack Obama and John Kerry and Hillary Clinton. That was the real collusion. And guess what? We were subordinating ourselves, Obama and Kerry and Clinton were subordinating the United States to Putin’s wishes in terms of nuclear disarmament.

We were deferring to Russia because Obama was hell-bent on Iran becoming a major player in the Middle East. Now, on that basis alone, stop and think of that. Our foreign policy, when it came to Iran with Obama, was to build Iran up. That’s why the Iran nuclear deal. The Israelis were scratching their heads, couldn’t figure it out. Nobody could figure it out. It didn’t make any sense. Why in the world do we want to build the Iranians up, and right there they are, client states of Russia, just as Syria is. And that’s what Tillerson’s doing here.

We would have never had Obama call him out this way. We had Obama sidling up to them, as in that open mic exchange with Dmitry Medvedev where Obama said, “You tell the Vladimir I’ll have more flexibility after the election.” This was in 2012. And he was talking about the flexibility to reduce our nuclear stockpiles. It wasn’t happening as fast as Putin wanted. I’m not making this up. I mean, it’s unreal.

So Putin is called out here by Tillerson. Russia has really aligned itself with the Assad Regime, the Iranians, and Hezbollah, thrown them in there. That’s clearly identifying Russia as allied with terror groups. That’s what Iran is, a terror state. So is Syria. And Tillerson is making no bones about it and then asks if that’s a long-term alliance that Russia finds to be in its interests. Which led to a reaction from Putin this morning in Moscow. He was talking about the crisis in Syria. 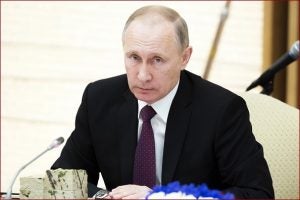 PUTIN: We say that this resembles very much the situation of 2003 and the war in Iraq. First of all, there was a campaign launched in Iraq, and it finished with the destruction of the country, the growth of the terrorist threat, and the emergence of ISIS on the international arena.

RUSH: Now, how about that. In a way it reminds me of the way the old Iranian president used to speak, old Mahmoud Ahmadinejad. When this guy spoke, you could have sworn it was the Democrat Party speaking. I’m not kidding. During the 2012 campaign he was still the president of Iran. They tossed him out ’cause even he got a little bit too much to explain for the radical mullahs that actually run the country. So Ahmadinejad was sent off to some think tank in Iran, which respectively is a prison — I’m laughing about that — he’s not sent to a prison, but he was disempowered, shall we say and somebody else appointed to be the figurehead leader of Iran.

But whenever Ahmadinejad would speak about the United States and George W. Bush, it was identical to what the Democrat Party was saying. I remember observing that countless times. And now here’s Putin doing it. Vladimir Putin says (paraphrasing), “You know what? This resembles, the attack, Trump’s attack in Syria, this resembles very much the situation of 2003 and the war in Iraq. There was a campaign launched in Iraq, and it finished with the destruction of the country, the growth of the terrorist threat, and the emergence of ISIS international arena.” And so Putin is trying to capitalize on Democrat Party rhetoric.

This is exactly the way the Democrats blamed and described Bush. Never mind the fact the Democrats supported the war in Iraq at first for two years and then they pretended they never did. Ditto Hillary Clinton. The only reason ISIS came into being is not because of George W. Bush. It’s because of Barack Obama. Obama pulled out of Iraq after we had successfully engaged there. Well, limited success. Basically left Iraq as stateless with a weak to nonexistent government, making it easy for ISIS to move in. That’s all on Obama. None of that’s on George W. Bush.

But now here’s Putin playing to the American left and playing to the American media, claiming that Trump is simply reenacting the failed Iraq policy, this time in Syria. And this is gonna give ammunition to the media and the Democrats to go after Trump. They’re gonna try to make him the next George W. Bush. It isn’t gonna work because Trumps not gonna sit there and put up with it, but they’re still attempting to do this.