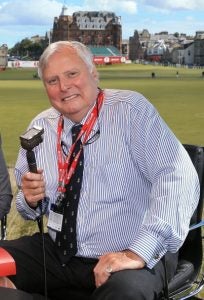 RUSH: Do any of you know the name Peter Alliss? He’s now 86. He is a golf commentator for the BBC, and he has over the years — not for a while — but he used to do commentary for ABC when they had golf. They used to have the U.S. Open and some other tournaments. And he’s exactly the kind of uppity establishment Brit that you would think, the upper crust, the blue-bloods of golf clubs over there. He’s still doing commentary now and then for the BBC.

He was at Augusta doing commentary for the Masters. And did you see, did you all watch it when they showed the shots of Sergio Garcia’s fiancee? (interruption) You didn’t see that? Well, then this isn’t gonna mean anything to you. Sergio is engaged. His fiancee used to work at the Golf Channel. She plays golf herself and she was wearing what looked like to me to be blue shorts, but it turns out it was a very short blue skirt.

So Peter Alliss on the BBC just says, while she’s on camera at 18th green watching Sergio come in, makes a comment, “Well, there’s the shortest skirt in the arena today,” and he’s in trouble for misogyny! He’s in trouble for sexism, for commenting, and he didn’t say anything negative about it. He was just addressing what you couldn’t miss if you saw it yourself. As I say, it looked like a pair of shorts. I just can’t believe it.

They’re dumping all over the guy in the U.K. for misogyny, sexism, violated political correctness, not supposed to comment on such things. He didn’t say anything critical, least not that I read, anyway.