Obama Lied About Removing All Chemical Weapons from Syria

So it’s just another example of the media touting and promoting greatness on the part of Obama, especially in comparison to Bush. I mean, the way they did this story was Bush lied about weapons of mass destruction. We went to war and people died! But Obama? He’s smarter than Bush. He’s smart! He’s so smart. He’s so erudite. He’s so our good guy, and he told the Syrians what-for, and he told the Russians what are-for. And the Syrians were so scared of our guy that they got rid of their chemical weapons of mass destruction, where Saddam Hussein just laughed in Bush’s face.

That’s the way they portrayed all this, and for three years the media and “fact-checkers” allowed that phony baloney, plastic banana, good-time rock ‘n’ roller portrayal of Obama’s prowess in foreign policy to stand. Now we know it was all BS and the PolitiFact, because of this attack, had to retract their fact check that they said “mostly true.” Now, there’s another aspect to this. There are red flags. A lot of people have red flags about the way President Trump is reacting to this.

There are people who think that this attack in Syria using chemical weapons on Syrian citizens is a setup designed to draw President Trump into military action in Syria, just as Bush was drawn into action in Iraq. Now people are beginning to think that the intelligence agencies from all over Western democracies — ours, the CIA, MI6 in the U.K., practically every allied intel agency — agreed with the CIA and everybody else that Saddam had weapons of mass destruction. You’ll remember the presentation Colin Powell gave, complete with satellite photos and all of that at the U.N.

Bush ran around the country for a year and a half selling the country on the idea that after 9/11, we had to root out any enemy like this that had these kind of weapons and were threatening to use them on Americans. That was the justification for the war in Iraq. So we get there, and, supposedly, there weren’t any found. Now, I’m not… I don’t totally believe that. I think Saddam did have WMDs and found a way to hide them, get rid of them. Maybe they went to Syria. But the upshot is that there are people now thinking that these intelligence people…

There were many Clinton holdovers just like there are now Obama holdovers, and that many people ran a scam on Bush. They knew that there were not mass quantities of weapons of mass destruction, and they let Bush go in there on purpose to embarrass himself. And there are people who think, “Look, that happened once, it can happen again. Mr. President,” they’re saying to Trump, “please being very careful before you make a move on Syria, ’cause you could be in the process of being entrapped again, just like Bush was.” 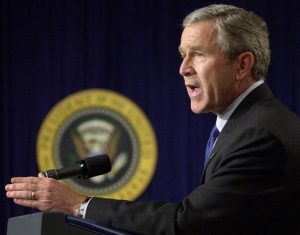 RUSH: Okay. So the Democrats and Obama were bragging about getting rid of all the nuclear weapons out of Syria, then that attack happens yesterday. The U.K. Daily Mail, Peter Hitchens. Mr. Trump, “It’s WMD All Over Again. Why Don’t You See it?” And he reminds President Trump of a tweet on June 15th of 2013. Donald Trump tweeted, “”We should stay the hell out of Syria, the “rebels” are just as bad as the current regime. WHAT WILL WE GET FOR OUR LIVES AND $ BILLIONS?ZERO.” (sic)

People are thinking the president needs to remember these tweets, and he was right back then. We’ve got no business getting involved in Syria. It might be a rehash of Iraq. Mr. President, remember your original tweets. There’s even another tweet. That first tweet was June 15th. There was another tweet from Trump on September 5th in 2015. And it reads this way: “AGAIN, TO OUR VERY FOOLISH LEADER, DO NOT ATTACK SYRIA – IF YOU DO MANY VERY BAD THINGS WILL HAPPEN & FROM THAT FIGHT THE U.S. GETS NOTHING!” (sic)

There are people who remember Trump tweeted these things and said similar things during the campaign. But now that he’s president — now that we’ve seen the pictures of the gas attacks on these women, children, average citizens — Trump said, “It’s on me now. We can’t tolerate this. We can’t put up with this, the frenzy over the…” By the way, all we have is the pictures. Some people think we don’t even know they actually did it.

“Today’s frenzy over alleged use of poison gas in Syria is the 2017 version of Anthony Blair’s WMD in Iraq.” This is the U.K. Daily Mail, Tony Blair, the British media think got sucked into a trick. There weren’t weapons of mass destruction and he was lied to and he bought the lie, and so people are afraid. People who support Trump are afraid that he may be falling prey to the same kind of trick, and they’re reminding him of his previous tweets.

RUSH: All right. Let me break this down for you, making the complex understandable. The Democrats want you to believe that Trump’s in bed with Putin, right? The Democrats want you to believe that Putin helped Trump win the election by somehow screwing Hillary and the whole Democrat effort. They colluded. They don’t have any evidence for it, but they’re convinced it happened, right? So Trump and Putin are buddy-buddy. Trump doesn’t ever criticize Putin.

What in the world, then, would Trump be talking about going into Syria for? Because that’s a Russian ally. And if Trump is even talking about attacking Syria, then he can’t possibly be Putin’s best friend. And that’s according to the Drive-Bys and the rest of the Democrats. I mean, Trump attacking Syria undercuts the entire narrative that Trump and Putin are buddies