RUSH: You think they might hire Susan Rice to replace him? Well, I mean, how about that? Would that not be an interesting twist? Hi, folks. How you doing? Great to have you here. Rush Limbaugh, back at it here at the Excellence in Broadcasting Network. It’s 800-282-2882 if you want to be on the program. The email address, ElRushbo@eibnet.us.

Okay, so the left has a scalp. According to numerous media sources, Steve Bannon, the number one strategerist for Donald Trump, has been stripped of his security clearance. As you know, Bannon was initially placed on the National Security Council. And when this happened there were outcries from all segments and sectors and quarters of the political media complex. It was unheard of. It was never done before. 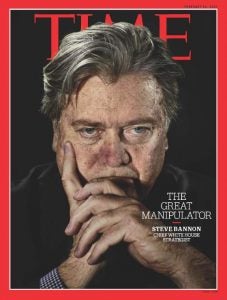 So the news here is that President Trump reportedly has removed Steve Bannon from the National Security Council. Bloomberg has it; Fox News has it; Drudge is leading with it. Bannon joined Trump’s campaign last year as chief executive officer. Then after the election he became Trump’s chief strategist. Bannon’s removal comes as part of a larger reorganization of the National Security Council. Homeland Security Adviser Tom Bossert has also had his role downgraded, Bloomberg reported, citing a person familiar with the decision.

Anyway, this is all gonna be reported as a major demotion. And the left is gonna be claiming and acting like they just got a scalp, that they are forcing Trump to make moves. And they’re now gonna be speculating what next will happen, what next will Bannon lose, what next will Trump take away from him. Is Bannon on the way out, is that what this means? And if Bannon is on the way out, then maybe that’s gonna be a signal that Trump is moderating. I can see all of this now, so I just want to prepare you for it.

RUSH: Oh, I may have to issue a minor correction. Steve Bannon may not have lost his security clearance in being demoted from the National Security Council. I was told that he has lost his security clearance even before I saw the story on the National Security Council, Bannon being removed from it. But I don’t know that for certain so I should take that back. What is interesting is how it happened. Now, when Trump chose Bannon to be the CEO of the campaign… Trump and Bannon go back a ways. You know, Bannon has worked at Goldman Sachs.

Bannon was right there in the beginning of the production of the TV show Seinfeld and retains syndication rights. Bannon has made a good living all of his life. He has lived in any number of places, has been in the high world of high finance, the world of Hollywood entertainment, and he ended up at the Breitbart website, which is funded largely by a conservative hedge fund family by the name of Mercer. I’m just giving you information. No judgment here. Just giving you information. Trump knows Bannon prior to this campaign. I don’t know of how far back. I don’t know what the connection is.

It probably would be something to do with the entertainment industry and Goldman Sachs, since Trump was there at NBC for The Apprentice and Celebrity Apprentice. In other words, Trump did not just hear Bannon running Breitbart and go, “Oh, man, I like this guy,” and hire him. Their relationship goes back. And when this happened, you know, Bannon was at the top of the food chain of Trump advisers. Except for Trump’s son-in-law, Jared Kushner, who is the husband of the eldest daughter, Ivanka. Bannon is not family, and, of course, Kushner and Ivanka are.

I mentioned to you some weeks ago — it might not be as many weeks ago as I think, could be 10 days, 14 days. But there are two people in the Trump inner circle that are the exact opposite of people like Bannon and Reince Priebus. And they are more aligned with Jared Kushner and Ivanka Trump, and one of them is Gary Cohn. He’s a very ideological liberal Democrat. He was a trader at Goldman Sachs. And his associate is a woman… Now I’m having a mental block on her name.

But she and Gary Cohn have now ascended to new heights, advisory roles in the Trump administration. And people analyzing this have looked at it and say, “What are these two people, Cohn and…?” I’m having a mental block on the woman’s name. Somebody will furnish it to me, and when I see it I’m gonna be embarrassed I forget it. Anyway, people say, “Why are they there? They are in direct conflict with practically everybody else Trump has put in his inner circle.” Well, they’re there because of Goldman Sachs. Goldman Sachs is high finance. High finance is very seductive.

Money and high finance are overwhelming seductive. And they happen to be big leftists. And I remember suggesting… Well, not suggesting. It’s been reported that there are constant internal battles for Trump’s ear within his inner circle, that Gary Cohn and the babe… I keep wanting to say Nina. It’s not Nina. It’s gonna come to me in a minute. But, anyway, they’re constantly vying for Trump’s attention. Bannon is vying, Priebus is vying, all of this stuff. We don’t really know what goes on. This is just the stuff that’s reported. And, of course, as it’s reported, it’s made to look like there’s great conflict.

Now people are gonna say because Bannon has been removed from the NSC, that maybe Gary Cohn and the other Democrats in there are starting to have sway. And, course, Jared Kushner, the son-in-law. (interruption) Diana? I think it’s Diana. (interruption) No, it’s not Jamie Gorelick. She was in the Clinton administration! I’m thinking the woman that works with Gary Cohn. She’s also from Goldman Sachs. I’ll find it during the break. At any rate, I’m just making a prediction here to you that Bannon being removed from the National Security Council is gonna lead to all kinds of news in the Drive-Bys that you’re not going to like seeing, and I’m just trying to prep you for it.

RUSH: By the way, of all places, NBC News is reporting that Bannon may have stepped down on his own. He only attended one meeting. He was only there as a placeholder after Flynn left, but that he never really wanted to be there. So NBC is portraying this as not a gigantic demotion but rather Bannon going where he wanted to go. We’re keeping a sharp eye.