How Must Loyal Gay Democrats Feel?

RUSH: You know something, folks?  Let me ask you a question.  If you were gay — either a gay activist, a militant gay, or just gay — but you’re a loyal Democrat… You’ve donated money to the Democrat Party. You have given to the Democrat Party. You have protested, you’ve marched, you’ve done whatever you can do to elect Democrats. You voted for them.

And then one day, a militant Islamist extremist comes along and guns down everybody he can in a gay nightclub… He was targeting homosexuals because of his religious beliefs.  He was doing everything he could to wipe them out and said so. And the people you voted for — the people you have been supporting because you think they’re out to protect you — then turn around and blame people that had nothing in the world to do with it.

And so you know that going forward Barack Obama and Hillary Clinton and the Democrat Party aren’t gonna do a thing about this.  They’re making excuses for why it happened.  They’re not making any effort whatsoever to stop these kinds of things from happening, it doesn’t appear. So you, as a gay person, continue to be at risk while you listen to the people you’ve supported, donated to, voted for, who blame people that had nothing to do with it.  Would you feel safer?  Would you feel more secure?

If I were gay and this whole thing has happened, and I’m watching this, I would be scared to death! I would know that I’d been targeted. I would know that it’s militant Islamists. I would know they’re pouring into the country through your open borders.  I would know this.  And then I would listen to people I vote for — people I supported, people I’ve raised money for and donated for — act like it didn’t happen the way it did and that people who had nothing to do with it are responsible.  I don’t know what I’d be, but I wouldn’t be relieved, and I would not feel safer. And I’d certainly be questioning people I think I’ve been supporting.

RUSH: I want to go back to the example I used before the end of the first half hour, the break at the bottom of the hour.  I was asking how I would feel if I were an ardent homosexual and had been loyal to the Democrat Party for as long as I’ve been able to vote, raise money, donate money, and then the largest terror attack since 9/11 targeted homosexuals, murdering 49 and injuring some 50-odd more homosexuals by design and on purpose. And the people I’d been supporting, the people I’d been raising money for, the people I have been advocating for, ignore who did it and try to blame it on people who had nothing to do with it. How would I feel?

Well, it just so happens there’s a column written by somebody calling themselves Anonymous at Pajamas Media, PJ Media.  Headline:  “I’m a Gay Activist, and After Orlando, I Have Switched My Vote to Trump.” I’m not gonna read the whole thing, just a few excerpts.

“This is the saddest day of my life. I can’t even wrap my mind around the horror of what happened last night in Orlando.” Folks, I’m just reading verbatim here. “Where 50 joyful dancing queers were murdered by a religious extremist. I’m sad — devastated, in my soul — about that; but I’m also sad that the events of Orlando have shattered my political beliefs, as I can no longer swear allegiance to a peace-love-and-unicorns progressive philosophy that only helps to get my fellow queers killed.”

“Yes, there is a war between religious fundamentalism and the spirit of love and tolerance. But we progressives here in America still labor under the delusion that the religion we need to combat is Christianity. But that’s a strawman opponent, and has been so for decades.

“Since the 1990s, Christian extremists have essentially lost all their power, and are now toothless nonplayers in the ‘culture wars.’ Meanwhile, Muslim extremists, with guns, murder us, and on the left our only response is to bleat about ‘Islamophobia’ and jump through hoops trying to explain away the self-evident religious motivation for the killings,” of gays.

“Oh sure, all year I’ve been playing the ‘Bernie or Hillary?’ game with all the other default-Democrats in my social and professional circles. But this is no longer some kind of game. Our lives are on the line. Although I voted for Hillary in the primary, I now cringe inwardly with shame and embarrassment at having done so, and in November I will vote for Trump. 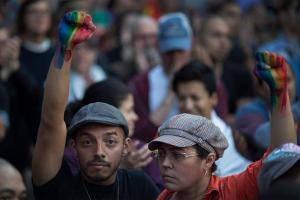 “As an aside, Trump has never said anything homophobic, and has always gotten along well with the gay community in New York, so there’s that in his favor as well. I also now realize, with brutal clarity, that in the progressive hierarchy of identity groups, Muslims are above gays.”

Exactly what I was wondering.  It’s exactly what I was curious about:  How do gay people feel today after seeing this happen, and the Democrat Party, their party, the progressive movement, do everything they can to absolve Islam for this, to absolve the shooter and to find a way to blame Christians for what the shooter did.  “I also now realize, with brutal clarity, that in the progressive hierarchy of identity groups, Muslims are above gays,” in the Democrat Party.  Yep.

RUSH: Michael in Orlando, you’re up first today.  Great to have you with us, sir.  Hello.

CALLER:  Hey, Rush.  Hey, it’s an honor to talk to you.  I just wanted to tell you, I was at that rally last night in Orlando, and it’s true what you were saying. There was a lot of talk about anti-gun violence.  That was probably the major, major theme.

RUSH:  At the…? There was a rally last night? Was it a memorial rally or just a…? What was the purpose of the rally?

CALLER:  It was a vigil for the people who died. 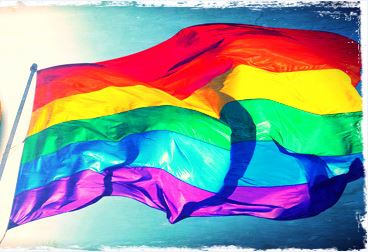 CALLER:  There was a lot of signs that, you know, “Ban Automatic Weapons.”

RUSH:  Well, of course. (sigh) You realize that whenever there’s… These people are funeral crashers.  They’re vigil crashers.  These are professional rent-a-mobsters who show up whenever there’s an announced vigil like this. They show up and they try to pretend that they are part of the group conducting the vigil when they’re not.

RUSH:  And they hold up their signs, and they try to make it look like the very group that was slaughtered doesn’t even have any anger about who did it.  They’re angry at the NRA.  It’s all part of the — and the media’s right there.

RUSH:  The media’s right there to broadcast the pictures and so forth.  And you’re here to tell the story.

CALLER:  There was also a lot of talk about, you know, no violence toward Muslims, things like that.

RUSH:  In other words, they were saying, “We must not overreact, and —

RUSH: — we must not lash out at our Muslim friends over this because that must not be a backlash against Muslims.” Something along those lines?

RUSH:  Well, did you say anything at this thing, or were you just there observing and noting?

RUSH:  So how did you feel when you left it, when you walked away from it?

CALLER:  I just thought it got a little too political.  There was a lot of talk like… They had different clergy people there, Christians, and —

RUSH:  I’m sorry, but what you were at — what you attended — was an event that was hijacked by professional leftists to make it appear to be something that it wasn’t. I don’t doubt that some of the people there actually held the views that you’re describing.  I have to go, though.