MICHAEL SHURE: There is a Tea Party movement in South Carolina that is urging voters, urging Republican voters… What they are saying is people should go out and vote for Bernie Sanders. Some are interpreting that as a way of sort of meddling with the democratic process, but also getting a more favorable candidate to oppose Donald Trump. “Operation Chaos” was something coined by Rush Limbaugh back when Hillary Clinton and Barack Obama were going at one another in 2008, trying to get people to vote for Hillary Clinton to keep Barack Obama, uh, getting battered in a race so he was a weaker candidate when he would finally go on to face the Republican that year. It does have some potential impact, especially in a race with so many candidates. 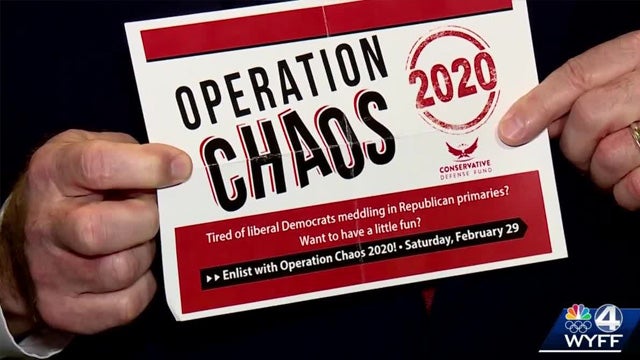 RUSH: That’s not what it was about. But the bottom line is, Operation Chaos in 2008, 12 years later, the Democrats are still paranoid of Operation Chaos. Let me remind you. As I say, people are listening to this program for the first time every hour of this program, so those of you who have been here a while, I ask you to be patient while I bring others, the newbies up to speed.

So I urged Republican voters, since the nominee was already in, and it didn’t matter how Republicans voted in the remaining primaries because it was McCain. So in states with open primaries, I urged Republicans to re-register as Democrats in order to vote. And I urged them to vote for Hillary just to keep this going, just to deny Obama for as long as we could.

But it wasn’t about, as the sound bite said here, it wasn’t trying to get a weaker candidate. Everybody knew it was going to be Obama. We just wanted to prolong it. So I urged people to go out there and vote for Hillary. And in two or three states, it may have mattered. There may have actually been enough Republicans that did this to matter because Hillary won I think in Indiana and particularly a couple of big precincts in Indiana that could only have been because Republicans crossed over.

It was so impactful, folks, that the Democrats made a movie out of it starring George Clooney called “The Ides of March.” And if you go get the movie, you watch it on Netflix or however you watch movies, the first one-third of that movie is about the Democrat Party’s paranoia with Operation Chaos. And it was the total creation of me in this program. And they are now still talking about it 12 years later, and they are pulling it off.

They are executing it in South Carolina. There are people actually, Republicans registering as Democrats or Independents to be able to go and vote in the Democrat primary to kind of throw a monkey wrench in it all for the fun of it. The story: “‘Operation Chaos 2020’ – A movement is urging SC Republicans to vote in the Democratic presidential primary.”

Stephen Brown, in a news release, said, “We are doing this openly, and loudly, to make a very public protest in opposition to open primaries. We want the South Carolina General Assembly to change the election laws to permit certified political parties to hold closed primaries.”