Track the Coronavirus Yourself Via Johns Hopkins

RUSH: This is Bob in Coronado, California. Glad you waited, sir. Welcome to the EIB Network.

CALLER: Hi, Rush. Thank you very much. Two quick comments regarding the coronavirus — and this is from me, a physician — and I don’t want to be too critical. But from the government standpoint, being involved in medicine, it was really kind of interesting, number one, that the index patient in California, doctors and nurses and respiratory therapists wanted to test the patient for coronavirus. Because of the algorithm-based way the government does things, it took four days. Again, I’m not being supercritical but it’s kind of a classic, you know, “We won’t follow what the doctors want to do.”

RUSH: No. It’s a valid question about the role of bureaucracies and things like this.

RUSH: That’s really what you’re getting at. 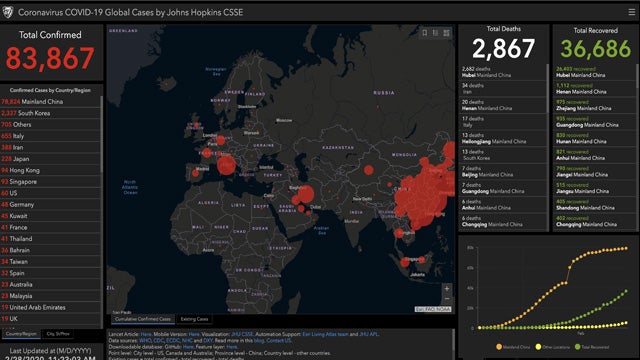 CALLER: I am, and it’s just part of it. But I think you’re going to be borne out over the next few days. I’ve talked to people who are very involved in the situation on kind of the Asia end of the testing. There’s going to be some new information that I think is going to come back to basically make your prediction very accurate, and that is specifically —

RUSH: Well, wait. I predicted a lot. Which prediction are you talking about, that this is going to end at some point?

CALLER: No, that the disease is somewhat overblown. I think it’s gonna be more than the common cold, but what they are finding is there’s quite a few more cases — and this is information coming out of Hong Kong and Shanghai, that there’s many more asymptomatic people that have the disease or have very, very mild symptoms. So that basically — I mean, it’s hard to do math on the radio, I know, but as that denominator gets bigger and the death rate stays the same, well, the mortality rate becomes much more like the flu and potentially it might even be a milder disease than the flu.

RUSH: We hope that’s right. The thing is that the Chinese situation is what it is, and we don’t want that to be replicated here. And we hope that it won’t be. For one thing, the Chinese government tries to hide things like this and bury them. And then when they escape, they downplay the severity of it. That’s not going to be possible here, even if there were people inclined to try it.

I have here the Johns Hopkins University and hospital website that is keeping the official tab on the coronavirus. They update it whenever there is information to add to it, and you can also reload the browser that you use. And the total confirmed number of cases as we sit, the last report was at 11:20 — in fact, let me hit reload here. Still, the last update was 11:23 this morning eastern time: 83,867 cases, 2,867 deaths, and 36,000 people who have recovered from it.

Despite what you’ve heard, about 4,800 potential cases in California, it’s still 60 cases and a significant portion of those were people that were on the coronavirus Princess, the cruise ship that docked off Yokohama in Japan and people that we flew back and landed at Travis Air Force Base, which is the area of California where this mysterious case, one person who apparently contracted the disease having not been in contact with anybody who had it. But still, in the U.S., the number is 60 cases.