RUSH: Dr. Drew Pinsky. This guy is so filled with common sense. I saw this, and I forgot. I was going to make a note to Cookie, send her the link and get this.

He’s not a conformist. He goes against the grain, goes against conventional wisdom unabashedly and he did on the coronavirus. So the host said to Dr. Drew Pinsky, “Do you really believe that Vice President Pence is the right person to handle this considering how he mishandled the HIV epidemic in 2015, with the needle exchange program, which one study said actually contributed to more deaths?” 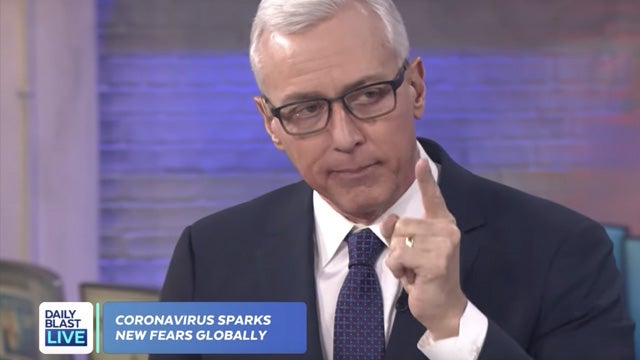 The media went nuts! Said this was an attack against homosexuals, and they went out and they tried to find businesses who would not bake a cake for a gay wedding reception or not bake a bunch of pizzas. And they found a 20-year-old girl who was managing a family pizza business in some small town. They had gone all over the state trying to find someone. They found this woman. “If a gay couple came in and ordered pizzas for their wedding reception would you serve them?”

There’s no way that a conservative is ever going to be given credit or acknowledged for doing anything positive for the homosexual community in the medical arena. Here’s Pinsky setting people straight on how it’s all fake news that Pence didn’t know what he was doing and caused the whole area to lose ground.

Now, you do a story like this and they’ll go nuts at CNN. They’ll call you irresponsible. Same thing at CBS, ABC, NBC, and yet the story is out there. I have nothing to do with it. It’s from some place called Western Journal, C. Douglas Golden.

Some quotes here. “Fear helps make government more powerful — and it keeps them looking like our savior. That’s something it helps to remember in situations like this.

“The city-state of Singapore ended up subsidizing masks so that every family could have them after people decided to hoard them like they were bottled water in a storm. Pharmacies reported massive shortages of both the masks and sanitizer.
Singapore had, as of this past weekend, 89 confirmed coronavirus cases,” and yet panic had caused them to sell out of masks all over the city-state.

“That means 0.002 percent of the population is infected.” Two one-hundredths of the population is infected. “Keep in mind, too, that Singapore’s government is much more open about its COVID-19 numbers than China is being. In other words, Spanish Influenza this isn’t.”
Between October 1st and February 15th, the CDC estimates there have been between 29 and 41 million cases of the flu in the U.S., causing between 16,000 and 41,000 deaths. Remember that the fatality rate in the U.S. from coronavirus is currently zero. “Doesn’t matter, Rush. It’s going to get worse! It’s going to get worse as more people get it and it spreads.”

This is why I was saying, folks, we’re dealing with the common cold right now, and look what they did to me with that comment. All trying to avoid a panic and keep things in perspective. Numbers show coronavirus appears far less deadly than the flu. Let’s go back to Dr. Drew Pinsky on the Daily Blast Live and the host Sam Schacher. Question: “You recently said that much of the concern about the coronavirus is really media over-hype. Do you still feel as passionate as you did a couple weeks ago about this?”

PINSKY: We have in the United States 24 million cases of flu-like illness, 180,000 hospitalizations, 16,000 dead from influenza. We have zero deaths from coronavirus. We have almost no cases. There are people walking around out there with the virus that don’t even know they have it, it’s so mild. So it’s going to be much more widespread than we knew. It’s going to be much milder than we knew. The 1.7% fatality rate is going to fall. Where was the press during the Mediterranean Corona outbreak, where the fatality rate was 41%? Why didn’t they get crazed about MERS or SARS? This is an overblown press-created hysteria. This thing is well in hand. President Trump is absolutely correct.

RUSH: I guess it’s not just me out there saying this stuff. I guess there are some voices of reason all over. And when Drew Pinsky or this guy, C. Douglas Golden, when they write and say this stuff, they are attacked. They are beat up as irresponsible, not taking it seriously enough. They may even have an indirect hand in the fatality rate because they are telling people there’s nothing to worry about.

RUSH: And we are back, now, on this business of politicizing, I have it right here, in my formerly nicotine stained fingers, Gail Collins in The New York Times two days ago, “Let’s Call It Trumpvirus. If You’re Feeling Awful, You Know Who To Blame.”

That’s how it starts. And they get mad at me for claiming they are politicizing this and seeing an opening for the Democrats? You people in the media are so transparent now, you don’t even see it yourselves.