RUSH: Trump is on the Left Coast — California, Nevada, Colorado, and Arizona, I believe. In fact, he’s got a rally coming up in Colorado Springs, and people are lined up in four- and five-degree weather, and the Drive-Bys look at this and the Democrats look at this and they can’t understand it.

“Ah, it doesn’t mean anything.” 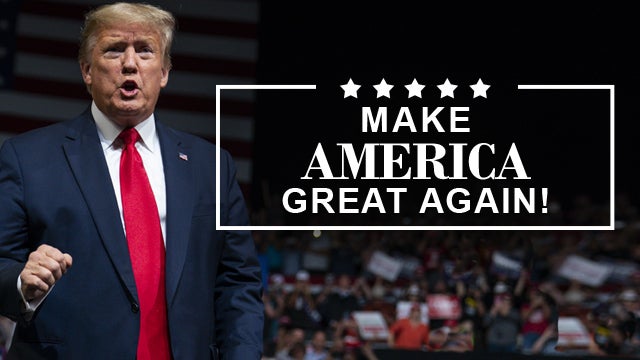 But yet when Crazy Bernie drew 17,000… Did you see this, Snerdley? Crazy Bernie drew 17,000 to a stadium in Tacoma. (interruption) Yeah, well, free beer, I think. Maybe not. Anyway, I want to play some sound bites for you of President Trump in Bakersfield, California, last night. I encouraged him on this program in June of 2019 to do this — go to California — in the middle of the Democrat candidates complaining about homelessness. Well, no. The Democrat mayor of Los Angeles was complaining that Democrat presidential candidates were not talking about homelessness.

And I told him. I said, “Mayor Garcetti, they ain’t gonna bring it up. It’s a Democrat problem. They’re not gonna talk about it. You better fix it — it’s your problem — ’cause they are not gonna help you. You can’t blame this on Trump.” I said, “Trump should go there. Trump should go plant the flag, not necessary to win California, but to get started on rebuilding it. There’s all kinds of openings in California,” and the president is there, and in Bakersfield last night, one of the first groups of people there that he sought to show he’s on their side is California farmers.

THE PRESIDENT: On top of regulatory failures, California has not built any major water-storage infrastructure since 1979, even as the state’s population has increased by nearly 70%. Think of that. In the past decade, the cost of water increased by 127% in San Francisco alone and over 70% in Los Angeles — and you can’t even get it. Hundreds of thousands of acres of once beautiful green farmland became bone dry. In our reforms and what we’ve done… One year ago, actually, we estimated that our farmers would have received enough water to support up to 850,000 additional acres of ground — think of that, that’s a lot of acres — and over 130,000 — minimum, over 130,000 — jobs. With today’s actions, we will help bring farmland back to life. All of the land that I talked about before will be green and beautiful.

RUSH: Now, this is the kind of thing that is not gonna get any play in mainstream media ’cause it’s boring. But this is huge, because the president’s exactly right. Stop and think, now. California’s considered to be very a progressive state, very ahead of the curve. These are the people that are hip. But look at what’s the truth there. There hasn’t been any major water-storage facilities built since 1979, despite the population growing by 70%. That’s just pure mismanagement, and it’s all on the Democrat Party.

“In the past decade, the cost of water increased by 127% in San Francisco alone and over 70% in Los Angeles — and you can’t even get it.” These are the kind of things when you have as your audience a bunch of farmers, they’re the ones suffering and paying the price because of this mismanagement. So you go out; you plant the flag. You let this group of people know you’re on their side and you understand what they’re up against, and you turn them into allies. Trump also did another thing I hoped he would do. 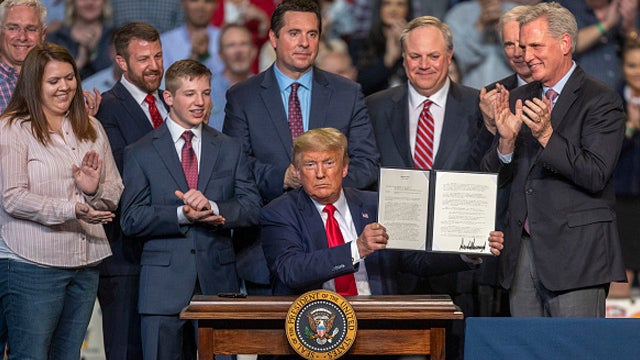 He went out there and he hammered the Democrats on homelessness. You know, they always try to blame this on Republicans, ever since Mitch Snyder and what’s his name, Martin Sheen, all the way back in the late ’80s and early ’90s. Yeah, it was all the Republicans’ problem. They didn’t care. They were cold-hearted and cruel, and yet it was the Democrats and their points of law that created this stuff, and it’s on display in San Francisco and Los Angeles. I really hoped the president would go out there and hammer them, and he did.

THE PRESIDENT: I think we can say — I mean, we have to work hard — we can pick up seven seats in the state of California.

THE PRESIDENT: Seven seats. And I want to thank —

MAN: Get rid of Pelosi!

THE PRESIDENT: (chuckling) He said, “Get rid of Pelosi.” That’s okay with me.

THE PRESIDENT: A lot of people agree. Look what’s happened to San Francisco. So sad what’s happened when you see a slum, where it’s a slum. It’s worse than a slum! There’s no slum like that. What they’ve done to San Francisco is a crying shame, and it’s something that we’re gonna do something about. Because if they don’t fix it up, clean it up, take care of the homeless — do what they have to do but clean up their city — the federal government’s gonna have to step in.

THE PRESIDENT: We’re gonna do it in Los Angeles and San Francisco.

RUSH: Ohhh, yeah. The federal government’s gonna step in and fix it if the mayor and the governor don’t. There hasn’t been… I mean, there isn’t much all of Republican Party in California. There are some good people in it, and they are trying to be heard, but none of them have the voice of the president. So he goes out and says this stuff, and I guarantee you it’s inspiring. Now let’s move to Phoenix last night during a Keep America Great Rally. President Trump speaking about a 100-year-old Navy veteran of World War II named Irvin Julian, who was carried to his seat ahead of the rally… 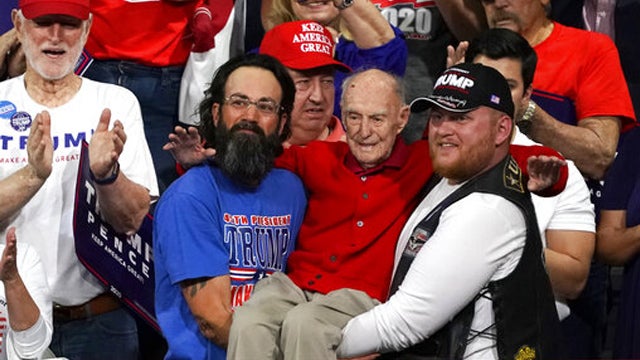 CROWD: (cheers, applause and chanting) U! S! A!

THE PRESIDENT: And I asked my son, Don, to get a couple of hats and get some things and give them to Irwin right now, and I want to thank you. Really, that’s a great honor, and thank you for the great job you’ve done. An American patriot. Thank you very much.

RUSH: Debbie, Colorado Springs, you are next. It’s great to have you with us today. Hi.

CALLER: Hi, Rush. Mega prayers, first of all. And I just wanted to report in that what they’re reporting on the Trump rally here in Colorado Springs, and I guess people have been lining up since Tuesday morning, and they’re camping out. They’ve got tents set up at the Broadmoor World Arena. And they said the parking lot was full this morning, that you couldn’t even get in. And that one of the guys referred to it as the Woodstock of Republicans, or Woodstock for Republicans.

CALLER: No, I wasn’t. But that’s what one of the guys who’s attending, he referred to it as the Woodstock for Republicans, this rally.

RUSH: Well, if he wants to, fine and dandy. How many people are lined up there now, do you think?

CALLER: Well, I have no idea, ’cause they just said the parking lot’s full. I-25 has been a mess trying to get through that area.

RUSH: Yeah, I’ve been there, done that. I’ve done that myself.

CALLER: Yeah. So, anyway, they said there was red, white, and blue everywhere, Trump paraphernalia, and one of the reporters said they’ve never seen anything like this in Colorado Springs, ever.

RUSH: I’m damn well certain they haven’t. Now, when is the rally? Tonight?

RUSH: Yeah. And people lined up. And the Democrats continue to kind of discount, “Well, these are just these Trump voters, they’re gone, they’re lost, it doesn’t mean anything.” Anyway, Debbie I’m glad you waited. I’m glad you called. Great to talk to you. Thank you much.