RUSH: Let me give you another headline. “Millionaire Takes Half Of Poor Person’s Last Six Dollars So She Can Stay In Failed Race For President.” This news story just broke, and it is a headline to a tweet from Fauxcahontas.

The tweet reads as follows: “A young girl came up to me tonight and said, ‘I’m a broke college student with a lot of student loan debt. I checked and I have $6 in the bank—so I just gave $3 to keep you in this fight.’ We’re staying in this fight for the people who are counting on us.” 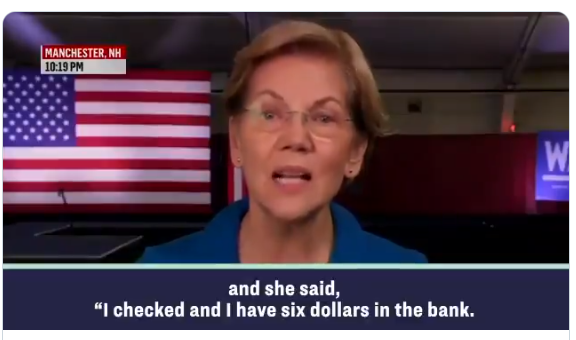 So, here is Fauxcahontas, a millionaire, Elizabeth Warren has millions of dollars. Not gonna get into how she got it. Not the point. She’s got millions of dollars, she comes in so far back last night you need a telescope to see her. She doesn’t have a prayer out there. She gets [approached by] a broke, in-debt college co-ed, says, “I checked and I’m down to six bucks, and I’m gonna send you three.”

And she kept the money! She kept the three bucks and then used the message as a sign she’s gonna keep fighting for the people who are counting on her. Had it been me, I would have sent the money back and stayed in the race if that was the intent, but you know what this is? This is total absence of any empathy whatsoever. This is so egoistic, it’s incredible.

Elizabeth Warren can only see this one way. The circumstances of this young girl are irrelevant to her. All she sees, “This woman, this young girl, loves me. I must stay in for this young girl,” rather than see an opportunity here to score a point, this mind-boggling.

This reminds me of when Clinton was having, back in the nineties, all these bake sales, students in junior high, middle school, grade schools, running bake sales to reduce the federal deficit. And they were sending Clinton the money they raised, 25 bucks here, 30 bucks. And he was keeping the money. Promised to apply it to the deficit.

What was the lesson? The taxes you pay are not enough. You need to do bake sales for your government. You need to raise even more money for your government in addition to the taxes that we are collecting from you. And these are the people, we are told, who have all the compassion for the downtrodden, the homeless, the hungry, the thirsty. And you can’t find any evidence that they do.

RUSH: I guess. I hadn’t thought of that. That broke college co-ed with six bucks in the bank that gave Fauxcahontas $3 and that Fauxcahontas kept? I just got a note from somebody, “You gotta remember, Rush. That young girl is hoping that she can get a free education, that Fauxcahontas will forgive her student loan. By investing…” (laughing) Maybe it makes sense. 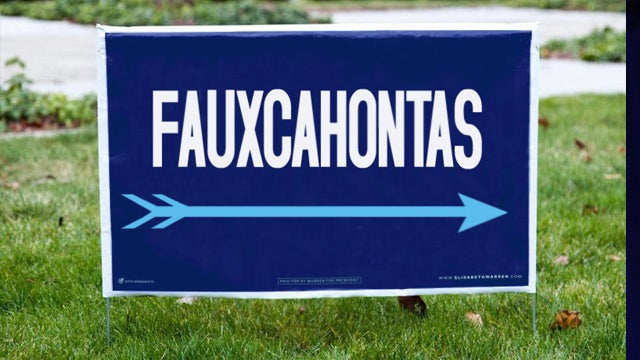 “Okay, here’s three bucks. If you get elected, you can forgive any student loan.” But it isn’t gonna happen, and even if that was the objective, Fauxcahontas should have given the money back! She should not have kept it. Somebody says, “Here. (sobbing) I only have six bucks, and I’m gonna give half of it to you. (sniffling) You’re so important.” For crying out loud. But I guess that’s why I’m not in politics.

RUSH: If you want to know what happened with Fauxcahontas, it’s very simple. Bernie Sanders tomahawked her in the back. From the moment that he said she couldn’t win because she’s a woman, her poll numbers nose-dived and the wampum from donors dried up. They had an agreement.

Do you remember this? They had an agreement not to attack each other, Fauxcahontas and Crazy Bernie, and Bernie broke it. Just one more treaty the white man violated with the native peoples, indigenous peoples, Fauxcahontas.