Mini-Election Night: Media Freaks Out Over Prospect of Trump Acquittal

RUSH: There’s a guy out there named Jason Johnson.

He’s a contributor at PMSNBC, and I think the guy works for a magazine or website called The Root, R-o-o-t, and I think it’s the website established by “Skip” Gates, Harvard professor of something or other. Listen to this. “MSNBC contributor Jason Johnson on Thursday said President Donald Trump will eliminate Californians’ right to vote in the 2020 election if the Senate does not remove him from office.” Now, how the hell would Trump do this? 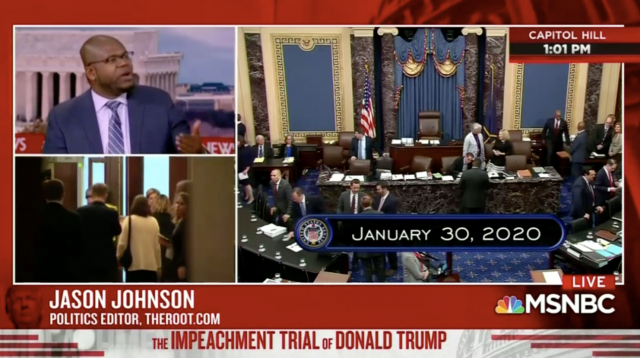 He says, “Imagine Donald Trump deciding sometime in June, ‘Well I heard this conspiracy theory that a whole lot of illegal immigrants voted in California so I’ve decided that during the presidential election California has to undergo extreme vetting because we can’t trust their votes. We’re going to shut down voting in [California].'” That’s what this guy’s claiming Trump will say in June, and then he said, “This is literally the kind of thing he will do now. We’re not talking hypotheticals anymore.”

We’re dealing in utter insanity. You know what this is rooted in? This is based on the fact that these people take an out-of-context quote from Trump in a conversation on ABC News about whether or not he can fire Bob Mueller, and during that interview, Trump says, “It’s right there in Article II. I can do anything I want. I can fire Mueller. I can not fire Mueller.” They’ve taken it out of context, and they’re now running around saying, “Trump says he can do anything!

“‘He can do anything he wants! He is a monarch, he’s a king, he can do anything!” He never said it. He doesn’t believe it. These people know it’s not true, but they have been so immersed in the lie of this for so long, they now believe it — and that’s the root of this. “This is literally the kind of thing he will do now. We’re not talking hypotheticals anymore.” He will simply say Californians’ presidential votes don’t count. What, and people are just gonna stand aside and let that happen? Meanwhile, who is it that’s actually trying to overturn an election? 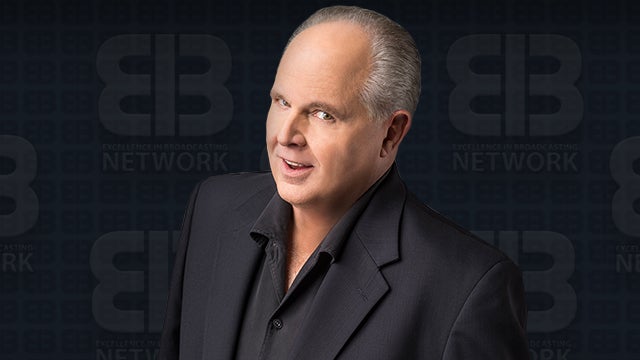 Uhhh… This is insane. There’s no other way to describe this. This insane. The guy really believes it, and it’s the result of the free-flowing poison through these people’s brains and veins and arteries and everything. They’ve literally been lying and consuming so much hatred that it’s become who they are. I can easily throw it back at him. Overthrow America’s democratic system? Who was it that now admits they got FISA warrants that were illegal to spy on a presidential campaign?

Who was it that used a phony dossier put together by Russian spies, paid for by Hillary Clinton, that was the sole reason there was ever any allegation or investigation of Donald Trump? Threat to the democratic system? And you and I sit here and wonder how in hell is it that people on our side do not see the crisis that we are in the midst of and face. These are people literally attempting to commandeer the next election! They have made no bones about it.

Schiff has gone to the floor of the Senate and said (paraphrased), “You gotta get rid of Trump now before he steals the next election! We can’t leave it up to the ballot box,” and, meanwhile, these people are running around claiming it’s Trump that’s gonna tell Californians they can’t vote. That’s not what Trump’s gonna do. If Trump does anything regarding California, it’s gonna be to try to win there and just to smoke these people and send it where the sun doesn’t shine. You want to hear funny sound bite? Grab audio sound bite number 1.

We put together a montage. This is mini-election night redux. Remember the Drive-Bys election night 2016, how the coverage starts out and they’re all confident. They’re all bubbling! They’re all effervescent. They’re so excited because Trump is going down, and Hillary Clinton’s gonna be elected, and the Obama administration is gonna essentially continue — and then dark clouds of doubt begin to obscure the faces of the happy mobs of TV infobabes and anchors.

By 9 o’clock, they start to see the unbelievable, that Donald J. Trump is going to win — and they can’t believe it. They are shocked and stunned. It was one of the most fun things to watch. If you’re ever bored, go back, find it on YouTube, and watch it again. Last night was so much like that. We have a montage of the Drive-Bys when the reality hits ’em that there aren’t gonna be witnesses and that there’s gonna be an acquittal.

JOHN BERMAN: Russia, if you’re listening, 2020 is open for investigations.

MAZIE HIRONO: We are witnessing the coronation of Trump. 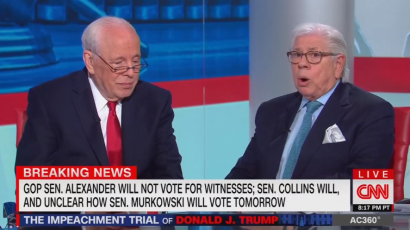 CARL BERNSTEIN: … a travesty, a cover-up. This is something for the ages.

JEFFREY TOOBIN: … a sham, a disgrace. The Democrats failed.

KIRSTEN POWERS: We just have to sit and wait four years until people vote?

JASON JOHNSON: This is step one to actual autocracy! I don’t understand how anyone cannot be terrified.

MARA GAY: Tonight is, really, a capstone and a just total collapse of faith in American institutions. It’s actually quite scary — a very scary moment. 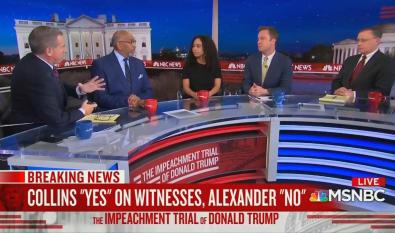 ELLIOT WILLIAMS: It’s an insult to the American people.

PAUL BEGALA: It’s really a tragedy. This thing’s a farce. It’s a sham.

JAKE TAPPER: They sure do.

RUSH: (laughing) They were so sure! What did they think there was gonna be a conviction? The media, yes. The media was hell-bent on forcing this to a conviction. They thought that if they could get the witnesses that that’s the end of Trump, that’s it, because they are so deluded, they think that there are witnesses in the Trump administration who have evidence of all these crimes that they haven’t been able to prove yet.

And then when Lamar Alexander came out and said (paraphrased), “You know what? I don’t need any witnesses. We don’t need any witnesses. This thing is a farce as it is. I’m voting ‘no’ on witnesses,” the air went out of the collective media balloon. It was like a giant fart, folks. These people just lost every bit of gas that they had stored up, and you could see ’em deflate right before your very eyes — and that’s how it sounded. They really thought they were gonna get a conviction if they could just get to witnesses, just get to witnesses. 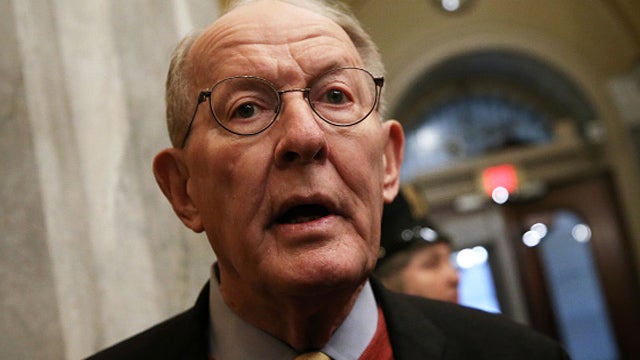 I’ll tell you, we’re not far away from the postmortem. In the postmortem, you wait and see what happened. The media is gonna start dumping on some of the House managers. They’re gonna say, “You know what? The Republicans did it right. The Republicans could have put a bunch of members of Congress up there as the president’s defense team. They could have put Jim Jordan in there, could have gone and got Ratcliffe and all that, but they didn’t do that. They went and got some topflight lawyers — and what’d the Democrats do?

“The Democrats gave us radical, partisan nincompoops — Schiff, Nadler, Zoe Lofgren, Hakeem Jeffries.” The postmortem is gonna be Adam Schiff is not the Hollywood success story everybody anticipated — and Nadler certainly isn’t. “If the Democrats had just gone out and gotten a big bunch of lawyers like Richard Ben-Veniste and others of Watergate experience to argue the case, it would have been far better.” You wait and see. When this thing settles, the media is gonna want some scalps, ’cause they have been convinced they could get a conviction in this.

RUSH: We have a great little sound bite here from F. Chuck Todd, NBC News Special Coverage of the Impeachment Trial, and during a discussion about the Republicans eventually voting to acquit Trump, F. Chuck Todd said…

TODD: I think the thing that’s uncomfortable here is the idea that if you basically can harness enough support in the public, you can bulldoze — you can essentially bulldoze the Constitution, perhaps, or you can… (sputters) And look, we are a democracy. That is what we are. We’re a happy. Uhhh, w’re a democratic republic. But that is — I mean, we are —

TODD: — essentially saying if you commit impeachable offenses, you can get away with it if you’re popular now.

RUSH: Is this guy for real? So Trump’s so popular now? I thought everybody hated Trump! I thought Trump was reviled. I thought was despised! I thought he was hated. Now all of a sudden, Trump is so popular he can bulldoze the Constitution! Have you guys forgotten about William Jefferson Blythe Clinton? His popularity rose like a skyrocket during his impeachment. This is the sound of utter futility. It is the sound of total frustration.

‘Cause I’m telling you — folks, do not doubt me on this — atevery phase of this, the original allegation Trump cheated, stole, colluded with Russia. They thought, they thought they might be able to prevent him being inaugurated. So he gets inaugurated; here comes Comey, the Steele dossier. They really thought that they were going to be able to create a groundswell of public opinion among people who were supposed to be shocked and outraged.

“This is the guy we voted for! Screw that. We want it back! Throw him out.”

That’s what they were hoping for. That’s what they were trying to create. They wanted to create distance between Trump and his voters. They wanted Trump’s voters to have an awakening, to realize, “Oh, my God, the guy’s a traitor? Get him out of there!” Then the Steele dossier. “You mean he hired prostitutes to pee on the bed that Obama slept in? Get him out of there!” Every phase they thought going in that it was gonna get him, failed.

Then Mueller, the Mueller investigation. Oh, folks. That was gonna be the orgasm of all orgasms. That was gonna be Trump gone the day the report came out. The important thing here psychologically is at every phase of this they, in the media, have convinced themselves that they were going to turn Trump into Nixon and he was gonna resign — and at every phase, they’ve failed, and you’re listening to this failure.

“My God. You know, the thing that’s really uncomfortable here is the idea that you can harness enough support in public…” Here we go, see? Disdain for the American people again. “Damn you people! Why do you have to like this guy? Why do you have to so publicly support this guy? If we didn’t have to deal with you, we could get rid of this guy. Just because you like the guy, he can go trample the Constitution.” That’s not what he means.

“Just ’cause you like the guy, we can’t destroy him.” That’s what this all really means. F. Chuck doesn’t care about the Constitution. He doesn’t even know that we’re a representative republic, not a democratic republic. We’re a representative republic. As far as Chuck Todd’s concerned, it’s the media that should have the power to determine who’s elected and who’s thrown out of office and who’s hated and who’s liked — and they can’t make you hate Donald Trump.

They can’t make you dislike Donald Trump, and they can’t stand it — and do not question me on this. This is exactly what this is. They think they have the power ever since Watergate — well, even before that, but Woodward and Bernstein — and the fact that they cannot alter public opinion on Trump has them feeling impotent to the point that they’ve never experienced it.