Say No to Witnesses! Trump Wins Or We All Lose!

RUSH: Jay Sekulow, one of the president’s lawyers at the impeachment trial. I want to play you a little 47-second sound bite here from something he just said, ’cause this is a good point. This is all about common sense and perspective to help people understand. Remember who the audience for this is. This is the Senate. The Senate is the jury. But also, it’s for the American people, those who are watching. Listen to this…

James Comey, the then-director of the FBI, said it was “salacious and unverified” — so salacious and unverified that they used it as a basis to obtain FISA warrants. Members, managers here — managers at this table right here — said that any discussions on the abuse from the Foreign Intelligence Surveillance Act utilized to get the FISA warrants from the court were “conspiracy theories.”

RUSH: So Sekulow goes on and he says (summarized), “Put yourself in Trump’s shoes. He was illegally spied on by an FBI that got FISA warrants on a bogus dossier. Put yourself in his shoes. You know that there have been forces within the government attempting to undermine you — and so is it any wonder you may not follow the talking points of Lieutenant Colonel Vindman — O say can you see? Is it any wonder you might not trust the very people who have been part of the coup to get rid of you?”

I didn’t hear any more than that, but I hope what this is… I hope that Sekulow is essentially putting this entire coup on trial, because, my golly, folks, this deserves to happen years ago. This thing still hasn’t been exposed. All that’s happened is that everything they’ve claimed has been shown to be untrue, but the perpetrators have never actually been exposed. That’s what Barr and Durham are doing in their investigation, which, where’s that? It’s never been exposed other than to those of us who know, people like me who’ve told people like you.

But it’s never been exposed. Here, also, before we get to Pam Bondi, one more thing, Maggie Haberman. She’s the one that got the leak at the New York Times about the Bolton book. And I mentioned this at the top of the program. Let me repeat it because she’s making my point. Trump goes for full, all-out victory on vindication or whater. He doesn’t compromise. You know the pressure’s on him. (sniveling) “Mr. President, just admit it!

There are many conservative, uhhh, shall we say, commentators/intellectuals who are literally advising the president to do that. “Just say it wasn’t a perfect call. Just admit that there was a quid pro quo. It’s silly to claim that there wasn’t a quid pro quo!” Trump is, so far, resisting it — and here’s Maggie Haberman. She’s on CNN this morning, and she’s talking to one of the Ken doll anchors named John Berman.

HABERMAN: We have seen with this president over and over again, even with the Access Hollywood tape, people will hear this in a way different than I intend it, but it is an edge. If you are not going to be shamed and you are going to plow straight ahead and keep walking — and if you have a partner in Mitch McConnell who also looks, you know, pretty down the road at winning, that is where you’re going. So Democratic operatives are wondering, “Why not just agree to Hunter Biden being called?”

HABERMAN: It makes a lot of people cringe. It makes a lot of Democratic senators who like Joe Biden cringe. But they figure that at the end of the day, these people who are suggesting this, they will gain more — the Democrats — than they will lose. When you’re dealing with an opponent who is going to do what it takes to win, then I don’t know why you’re surprised. 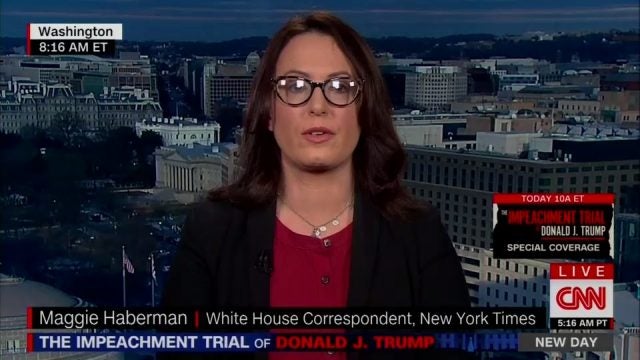 How do you know that what Bolton’s reportedly written in his book is true? How does anybody that know? This is a New York Times leak, and the New York Times is famous the past three years for lying through their teeth. By golly, they haven’t been right about so damn much.

RUSH: This is Kent in Spencer, Iowa, up next. Great to have you, sir. Hello.

CALLER: Yeah. Thanks for taking my call, Rush. I’ll get right to my point. I agree with you not to have witnesses, and one reason I say that is if Hunter Biden is called in as a witness, the same thing could happen as, oh, when Lois Lerner got called in as a spokesman for IRS. She pled the fifth. She, I think, was working on tax-exempt status for conservative nonprofits.

At the House committee meeting or that investigation, she pled the fifth. Nothing happened at that hearing. I’m gonna say the same thing could happen with Hunter Biden. You know, what’s his defense? I don’t think he has one. He very easily could plead the fifth, meaning his testimony wouldn’t happen and it’d be a complete waste of time. No witnesses. I think we’d be better off.

RUSH: Well, I agree with you. I think this witnesses thing is a ploy. It’s a trick. It’s done simply to extend this, to prolong the opportunity to dirty it up — and to eventually dirty up the acquittal, to taint the acquittal, which is obviously what parts of this is about. But I’ll tell you why. I’ll tell you why I say “no” to witnesses. It’s real simple. ‘Cause the Democrats are asking. “No! You don’t run the Senate.” The Democrats want witnesses, and there’s no need for witnesses.

“The House should have called every witness they wanted. It is not up to the Senate to do it.” There’s no reason to cave on this. The American people are not with the Democrats on this issue. The Republicans do not have to demonstrate that they’re fair. The Republicans don’t have to demonstrate they’re nice guys. It is obvious it’s the Democrats and the left who are grossly unfair here. 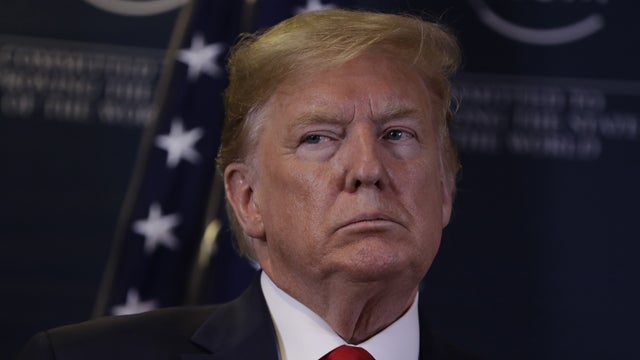 Everybody supporting Trump, and it’s a growing number, is fed up with this. They are funny with the way Trump is being treated. They’re fed up with all this. There’s no need for the Republicans to say (sniveling), “Okay, we’ll agree to witnesses so that people will think that we’re fair and nice and bipartisan” and all that rotgut. It’s a freaking trap! You say “no” because Schumer’s asking for it. You say no, because Schiff is asking for it.

I think going along with this witness business… The people that support this, for some reason they’re enamored of the process of all this, when everybody ought to be focused on the result. The result is ending this, not getting off on some process because it’s so historical in nature. If these guys — McConnell, whoever else, if they agree to this witness trip, it’s just gonna show witness.

The Republican voters are gonna be fit to be tied if they fall for this. If they go along with this, what’s the next thing the Democrats are gonna ask on the basis the Republicans are being unfair? “Okay. So they’re gonna give us our witnesses and we’re gonna get one that’s gonna plead the fifth, Hunter Biden. So what’s next? What are they next gonna claim the Republicans are unfair on?” This stuff has to be shut down!

This is it is not some little exercise in constitutional process. Donald Trump is in a politically deadly battle. Either he wins or we all lose. It’s as simple as that, folks. He wins or we all lose. And the Democrats know this. So screw these recalcitrant the Republicans wavering fear fully over whatever. You know, I just don’t understand the thing. Why is it that when we are in a position of strength it cannot be seen and acted on accordingly? 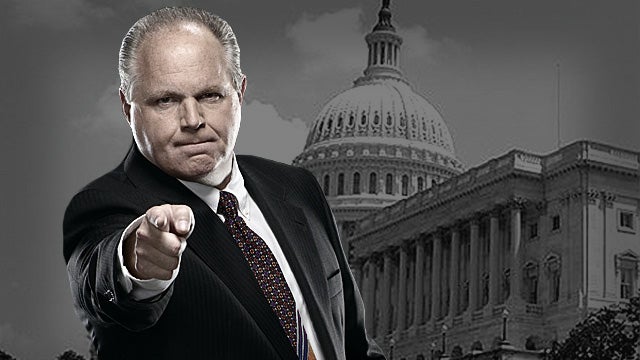 Quid pro quo phone call? There’s nothing here that’s impeachable. There’s nothing here that needs more witnesses — and if there were, Schiff could have called ’em. It’s up to the people making the case here. It’s not even about the phone call. That’s the thing. It’s not about the phone call. It’s about destroying Trump and what he represents. It’s about straying Trump and his voters. Can these people not see this?

RUSH: Okay. The Republicans have rested their case. They played a bunch of video from Jerry Nadler to a bunch of Democrats in 1998 and the Clinton impeachment in which they said the exact opposite what they’ve been saying in this impeachment about getting rid of Trump. It was an effective way to end, but it’s over. Well, the presentation of the case is over. Hell knows who what next.