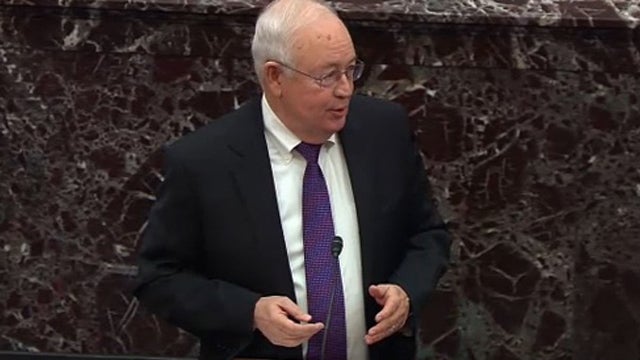 He talks about (summarized), “When I was trying to put Bill Clinton behind bars for all the crap that he did, we’d go to court — and every time we went to court on executive privilege, we won. We beat Clinton because he was suborning perjury and a number of other things. But at the end of the day Henry Hyde, who was running the House managers for the House, said that none of the president’s actions regarding executive privilege would in any way be considered impeachable offenses during the Clinton trial.”

Well, that just destroys one entire article of impeachment that the Democrats have, that Trump has obstructed Congress by refusing to let Schiff and his smarmy little team of managers from seeing everything they want. Anyway, he got pretty animated making this point. For him. Ken Starr animated is somebody in bed talking, not sleeping. That’s how to best describe the degree here.

RUSH: The Trump defense team just took a break. Mr. Shapiro just did a great job of nuking the claims the Democrats have made by pointing out video sound bites of all these ambassadors claiming, “Yeah, Ukraine got all the aid they needed from President Trump, much more than they ever got from Obama.” It was good.