RUSH: Now we get to some media reaction. This is local Boston News, WHGH-TV 7 News today in New England this morning.

MADELINE HUNT: The president may be impeached, but that’s not stopping him from enjoying Christmas at Mar-a-Lago. President Trump spotted with his sons and conservative radio talk show host Rush Limbaugh. 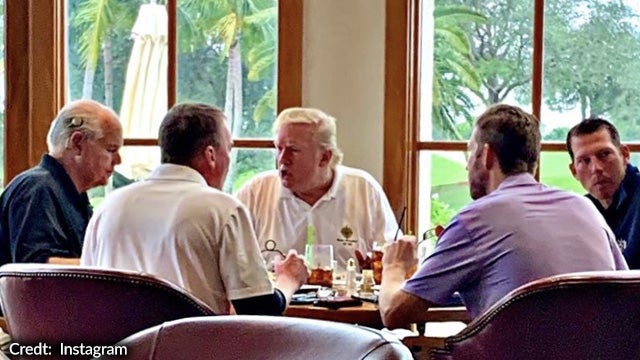 RUSH: And that’s that Twitter photo out there, that Politico photo that was tweeted. It was not at Mar-a-Lago. Maybe I shouldn’t be saying, but the White House hasn’t announced it, so I’m not really permitted to say anything about what it was. And, man, would I love to. I would love to. But they announce, and if they don’t, you don’t. What’s next? This is CNN also this morning. Fill-In Host Ryan Nobles, Washington Post correspondent Karoun Demirjian talking about Trump and this photo, I guess.

NOBLES: President Trump already in Mar-a-Lago, mixing it up with his allies on vacation there, already seen meeting with conservative pundit Rush Limbaugh. We know Rudy Giuliani’s down there. I mean, how will this impact, all these folks surrounding President Trump, his mentality going into that Senate trial?

DEMIRJIAN: Well, this is what some people feared, right, which is that when he’s at Mar-a-Lago, the access to him is pretty much, much more wide open than when he’s at the White House and all of his aides and advisors are around to control that. 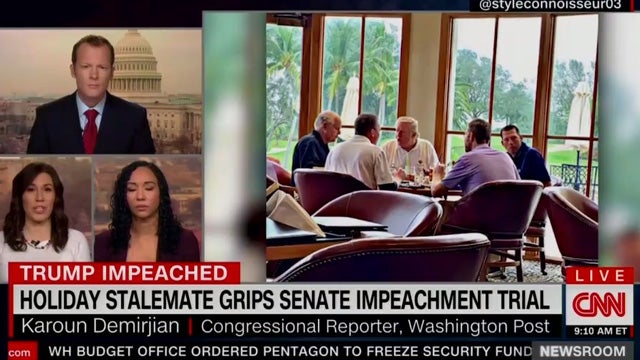 RUSH: See, there you have it. Oh, they’re scared to death. Oh, yeah, they can’t believe it. This is what some people feared, right, she said. There’s nobody afraid of anything, folks. This is what people feared, which is that when he’s at Mar-a-Lago, the access is, you know, pretty much more wide open than when he — in other words, the staff, the saboteurs, the leakers, they’re not around to protect him. They’re not around to make sure he doesn’t listen to people like Limbaugh.

Well, I’ll just say this. Their fears are completely, totally unfounded, in terms of who was in attendance. I’m surprised they haven’t figured it out. But again, I can’t tell you unless they announce it. We have just three more. No, four more. We got Michael Moore and even that idiot, what’s his name, De Niro weighing in. Here is CNN International, and I guess this is also from this morning.

MICHAEL HOLMES: Mr. Trump was spotted at his Florida resort with conservative talk show host Rush Limbaugh. The president is expected to spend the holidays there, but he will also be, of course, focusing attention on his impeachment, and he does continue to tweet.

RUSH: Wow. What big news. He continues to tweet while he is focusing attention on his impeachment. Also, CNN International, this is yesterday, a program called Connect the World. The Fill-In Host is Lynda Kinkade. And she was simply appalled at this.

KINKADE: We heard from his, the host of this forum, conservative Rush Limberg (sic) telling the crowd that climate change was a hoax.

RUSH: Oh, you notice the disdain, “Urging the crowd to attack Trump’s critics.” What are we supposed to do? You know, this is the thing. Somehow attacking the critics, that’s controversial? That’s something to be concerned about? What, you critics are supposed to be able to have free rein, you’re supposed to have an unopposed highway, say whatever you want, nobody’s supposed to fire back? “Urging the crowd to attack Trump’s critics.” Here’s Michael Moore. This is Friday. He’s got a podcast. He had Robert De Niro on with him.

DE NIRO: Look how silly they look. Look at Trump, how silly he looks. He’s a clown, but a dangerous one. 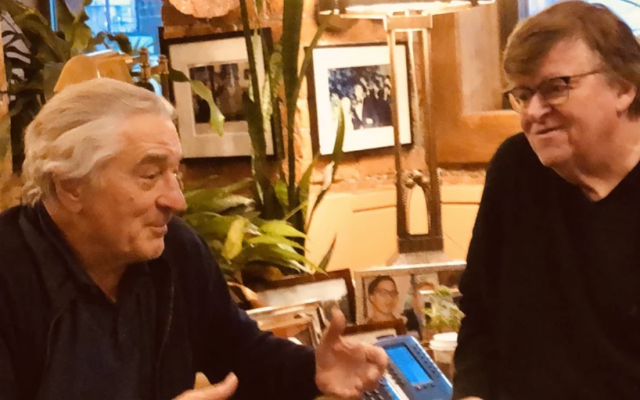 RUSH: That’s Robert De Niro. Look at him, he didn’t laugh at Hitler, he didn’t half at Mussolini. These people are off their rockers. They’re off their rockers. This is the poison of hatred. This is the catastrophic result of these people losing when they think it’s impossible for them to lose. And it’s also intensely personal. And it is so intensely personal, you have to wonder why.

What did Trump ever do to De Niro? And what’s De Niro ever done but play mobsters in movies? Okay, Film Festival and has a restaurant or two, okay, okay, fine. One more from De Niro. De Niro keeps looking for the next insult that will overpower the last insult he uttered. And this is his latest attempt.

DE NIRO: I’d like to see a bag of sh*t (bleeped) right in his face. Hit him right in the face (punches hand) like that, and let the picture go all over the world. And that would be the most humiliating thing ‘cause he needs to be humiliated. He needs to be confronted and humiliated.

RUSH: Needs to be humiliated. Bag of excrement, I’d love to see that thrown right in his face. Robert De Niro, the epitome of class, epitome of decorum. They say that Trump offends the sensibilities. They say that Donald Trump is an ogre, that he’s simply unsophisticated and ill-mannered. And yet they have apparently no judgment when they lob all of these things they would like to do or would like to see happen.

I’m telling you, folks, none of this is infectious, none of this is attracting anybody. People already have these sentiments about Trump. In fact, what’s happening is actually creating more support for Trump as Martha Raddatz of ABC, the latest to find out, went out into the hinterlands of America to try to find people who believe the Democrats are doing a great thing impeaching Trump, and they can’t find them.