RUSH: Now, I just saw something here. I was just given — I guess this is — yes, it is another tweet. I didn’t get it. It’s a copy-and-paste job again. I’m not on Twitter. It is from Sean Davis. Now, he is one of the co-founders of the Federalist. And this is a great example of look what happens when you do not overweight Democrats in a poll. And the title of the tweet from Mr. Davis: “Brutal Impeachment Numbers for Democrats in a New Monmouth Poll.”

Now, Monmouth is an institution of higher learning. It’s a university, college out there. And they do their own polling. And they’ve just released a poll on impeachment. This poll does not give the Democrats any weighted — w-e-i-g-h-t-e-d — any weighted advantage. You know, when any poll starts doing polls, they try to come up with the number of Democrats in the area the poll has taken place, number of Republicans, number of independents. 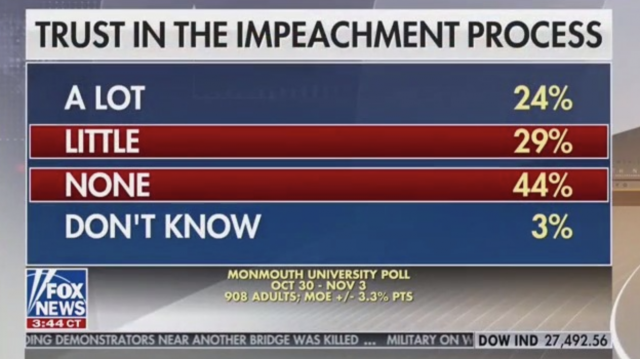 And in every one of these polls the Democrats are always represented by eight or nine percentage points more than Republicans. Registered voters, likely voters, wherever, it’s always the Democrats have a plus seven to plus nine advantage because the pollsters tell us (sniveling), “Well, there are just that many more Democrats than there are Republicans. So if we’re gonna get an accurate result we have to properly weight the poll.”

Well, this poll had a sample 29% Republican, 42% independent, 29% Democrat. It was 48% male and 52% female, which, to me, sounds like it is smack-dab right in the middle. Twenty-nine percent Republican, 29% Democrat, 42 independent, and 48% male, 52% female. That’s probably right. You know, there’s always gonna be more women than men in a nation’s population, in a city’s population, just gonna be that way.

Anyway, here are the numbers in the Monmouth poll with the breakdown I just gave you. Seventy-three percent have little or no trust in the process. Again, Monmouth is respected. The Drive-Bys love to report Monmouth. The candidates, parties, they use Monmouth.

Seventy-three percent of the people have little to no trust in the impeachment process. Sixty percent say the Democrats are more interested in destroying Trump than finding facts. Fifty-one percent oppose impeachment. Only 37% say that Trump’s actions are clear grounds for impeachment.

You won’t find these results in any other poll. Now, you will find polling data that shows impeachment isn’t the slam dunk the Democrats think. And the only thing the Democrats can rely on in those polls is they try to point you to the trend. “Well, yeah, it may not be a majority yet, but the trend line is that more and more people want it.” That’s the best they’ve got. This poll is what happens when you don’t oversample Democrats.

Let me give it to you again. When you don’t oversample Democrats, equal number, Democrat, Republican, and 42% independent, 73% have little to no interest in the impeachment process. Sixty percent say the Democrats are more interested in destroying Trump than finding facts. Fifty-one percent oppose impeachment, and only 37% say that Trump’s actions are clear grounds for impeachment.

Now, it’ll be real interesting to see if this poll happens to find its way into Nancy Pelosi’s group of Democrats that are paying attention to this. ‘Cause if they do, it’s gonna send shock waves. Look. Those people live and die by this stuff. I don’t, and I don’t know about you, but it’s not that I selectively choose which ones to believe and not believe. It’s that I don’t think polls, for the most part, are used anymore to reflect public opinion. I think they are tools to try to shape it. I think that’s how the media uses them.

Now, Monmouth is not a media outlet, it’s not like ABC News, Washington Post, or NBC NBC/Wall Street Journal or CBS/New York Times. This is just Monmouth University. And as I say, they’ve got a decent reputation. So we shall see.

RUSH: There’s also this Monmouth poll, a story on it from the New York Post: “New Poll Shows Trump Supporters Won’t Be Swayed — By Anything,” and I find this fascinating, ’cause the piece I just quoted from in American Greatness, talked about how the Democrats are just convinced that all Republicans are white supremacists and racists and neo-Nazis and nothing you can do will change their minds. 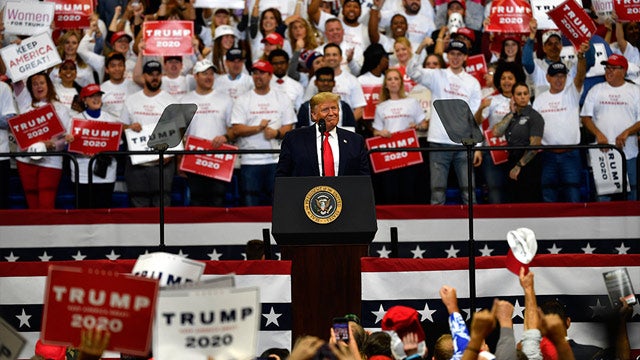 Yet we’re told Democrats are tolerant and open-minded and sophisticated, and yet it isn’t the case, and there is this story out there that Trump voters will not change their minds about Trump, that you cannot get them — you cannot get them to turn on Trump.  Here’s the New York Post story:  “Sixty-two percent of people who approve of the job President Trump is doing say that there would be nothing [he] could do to shake their support, according to a Monmouth University poll out” today.

It’s the same poll that talks about those dreadful-for-the-Democrats impeachment numbers.

“On the other hand, 70% of those who don’t approve of [Trump’s] job performance say there is nothing he could do that would win them over. Overall, 43% of the 401 respondents approve of Trump’s job, as opposed to 51% who disapprove. That is up from a September survey, where 41% approved while 53% disapproved.” This is despite impeachment.  Their impeachment numbers are probably right because none of these numbers are moving because of impeachment.