A Profundity from the Turtle

RUSH: Grab sound bite number 1. I gotta get the Turtle in here. I’ve been promoting the Turtle. For him, he was on fire earlier today on the floor of the Senate talking about Senate Democrats’ plans to filibuster a defense spending bill. Now, listen to this! 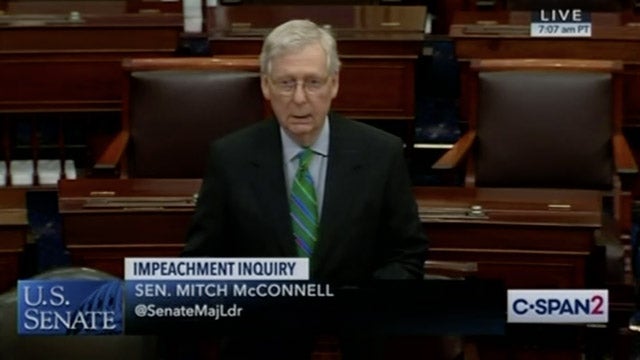 MCCONNELL: A few days ago, U.S. Special Forces executed a daring mission and took out the founder of ISIS. Less than a week later, for political purposes, Senate Democrats say they will refuse to secure funding for those very same missions. If Democrats filibuster this defense funding as they’ve threatened to, they will literally be filibustering the exact kind of military assistance for Ukraine over which they are trying to impeach the president. Only in Washington — only in Washington — will you see a show like that. They want to impeach the president for delaying assistance to Ukraine while they block funding for the program themselves!

RUSH: Was that understandable? This is a profundity here, folks, that, again, nukes the Democrat premise out of the water! They claim (impression), “Trump was withholding American aid until Ukraine found dirt on Plugs and his kid, and that’s an impeachable offense. Trump’s scum! Trump’s gotta go,” and yet the Democrats are promising to filibuster a defense authorization bill that will what? Send military aid to Ukraine! The very thing they’re impeaching Trump for — or claiming to.

That was The Turtle agitated right there. He was on point trying to make a big point about it, and he’s absolutely right.